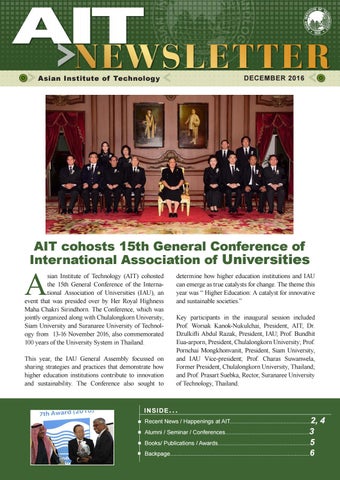 determine how higher education institutions and IAU can emerge as true catalysts for change. The theme this year was â&#x20AC;&#x153; Higher Education: A catalyst for innovative and sustainable societies.â&#x20AC;?

This year, the IAU General Assembly focussed on sharing strategies and practices that demonstrate how higher education institutions contribute to innovation and sustainability. The Conference also sought to

sian Institute of Technology (AIT) cohosted the 15th General Conference of the International Association of Universities (IAU), an event that was presided over by Her Royal Highness Maha Chakri Sirindhorn. The Conference, which was jointly organized along with Chulalongkorn University, Siam University and Suranaree University of Technology from 13-16 November 2016, also commemorated 100 years of the University System in Thailand.

Prof Kanchana honored with prestigious Jonathan B Postel Service Award AIT’s Prof. Kanchana Kanchanasut has been honored with the prestigious Jonathan B. Postel Service Award for pioneering the spread of internet across SoutheastAsia. Prof. Kanchana received the award at Seoul, South Korea, on 16 November 2016 on the occasion of the 97th Internet Engineering Task Force (IETF) Meeting. The award was instituted in 1999, and Prof. Kanchana is the first from Prof. Kanchana Kanchanasut receiving the award. Southeast Asia to receive the honor. The Jonathan B. Postel award is presented to an individual or an organization that has made outstanding contributions in service to the data communications community. “Dr. Kanchana’s devotion and pioneering work has helped extend the Internet to people both in Thailand and across Southeast Asia,” said Gonzalo Camarillo, Chair of the Internet Society Board of Trustees.

Urban infrastructure can reduce emissions by half, says study by AIT author in Nature Climate Change The design of today’s transportation systems, buildings and other infrastructure will largely determine tomorrow’s CO2 emissions. Climate smart urban infrastructure and buildings could cut future emissions in half or about 10 Gt CO2 per year from 2040 onwards. These core findings have emerged from a new study that has been jointly published by Dr. Shobhakar Dhakal of AIT in the prestigious journal “Nature Climate Change.” The study is led by Felix Creutzig from the Mercator Research Institute on Global Commons and Climate Change (MCC) and other international colleagues. Published on 24 November 2016, the journal article titled “Urban infrastructure choices structure climate solutions” adds that urban planning is key to achieving the two-degree target.

Lusaka Agreement Task Force (LATF) and AIT have signed a Memorandum of Understanding (MoU) for the implementation of the Wildlife Enforcement Monitoring System (WEMS) in Africa and Asia. Signing the MoU on 16 November 2016, Bonaventure Ebayi, Director, Lusaka Agreement Task Force (LATF) stated that the adoption of WEMS in Asia is a positive development for wildlife conservation. “We are happy that AIT will champion the implementation of WEMS,” the LATF Director remarked, while adding that he was confident that with Asia possessing a strong base in Science and Technology, it will be easier for Asian countries to embrace the system.

Prof. Tissa, who is the AMAX Endowed Chairman of the Environmental Sciences and Engineering department and professor of Civil Engineering at the Colorado School of Mines, graduated with a Master’s in Water Resources Engineering from AIT in 1974. Sharing details about the award, Prof. Tissa thanked AIT and Dr. Subin Pinkayan, Chairman, AIT Board of Trustees for “introducing him to hydrology.”

Back to the basics, says water conservation expert Eminent water conservationist and Stockholm Water Prize winner Rajendra Singh sought a return to basics and made an impassioned plea for inculcating a love towards nature. While delivering the keynote address at the Water Security and Climate Change Conference organized at AIT from 28 November-1 December 2016, Rajendra Singh pointed towards an immense chasm that had emerged between

scientists and the grassroots community.

Elaborating on how he had helped create 11,800 water bodies in India without the help of any governmental organization or corporates, Rajendra Singh gave credit for these initiatives to the local community. The event is organized by exceed centers CNRD (Cologne) and SWINDON (Braunschweig) along with AIT, and it is supported by Germany Academic Exchange Service (DAAD).

Twenty-five companies participated in the Career Fair held on 2 November 2015 at AIT. Six of the companies were participating in the bi-annual event for the first time.

A stellar demonstration of research conducted by students at AIT is the bi-annual exhibition organized by the AIT Students’ Union, where students present their work using conference posters.

Inaugurating the event, Prof. Sivanappan Kumar, Vice President for Academic Affairs, stated that the Career Fair provides an excellent platform for companies to interact with AIT. According to Carla C. Gonzales, Coordinator, AIT Career Center, the event witnessed participation from a large number of Thai firms.

Organized in conjunction with the Career Fair, the Research Exhibition provides an opportunity to students to communicate their research findings in a simulated conference environment. Holding it along with the Career Fair helps them connect with potential employers and the outside world. Led by the Muhammad Yaseen and Kaavya R, Chairperson and Secretary of AIT Students’ Union Academic Affairs Committee, this edition saw 13 students participate in the event.

“Education is still based on 20th Century assumptions” “Rapid globalization, digital revolution, mass migration, and the prospect of climate change requires a new breed of workforce.” Stating this at the Horasis Asia Meet held in Bangkok. AIT President Prof. Worsak Kanok-Nukul remarked that our education system is still based on twentieth-century assumptions. Users, particularly the business sector, are unhappy that they are receiving outdated products. The education system should equip students with global competencies to stimulate life-long learning and nurture global citizens who can act on issues of global significance, he added. AIT was the academic partner of the Horasis Asia Meet on 27-28 November 2016. Dean of AIT’s School of Management, Prof. Lawrence Abeln chaired the

plenary session at the event. A team of 12 AIT students hailing from eight countries acted as event rapporteurs.

Book on Structural Engineering by AIT authors A book on “Structural Cross-sections: Analysis and Design” authored by Dr. Naveed Anwar and Fawad A. Najam of AIT has been published by Elsevier. Released on 11 November 2016, the book focuses on basic tools and computation methods for structural design and analysis of beam and column cross-sections.

While close to 800 million people are involved in different types of Urban and Periurban Agriculture (UPA), it is only recently that UPA has started receiving due attention and importance. This is the theme of an AIT publication titled “Urban and Peri-Urban Agriculture in Asia” published by Prof. Jayant Kumar Routray and Dr. Mokbul Morshed Ahmad of AIT’s School of Environment, Resources and Development (SERD). Emerging out of the deliberations at a Regional Consultation Meeting on “Strengthening Food and Nutrition Security of the Urban People through Urban and Peri-Urban Agriculture” jointly organized by the Food and Agriculture Organization (FAO) and AIT in July 2015, the publication examines trends, issues, practices, challenges, implications and impact of UPA.

“The basic understanding of cross-sectional behavior is a key component in almost all aspects of analysis and design of structures,” says Dr. Naveed Anwar. “Our motivation to write this book is derived from the key role which cross-sections play in understanding overall structural behavior,” he adds. While Dr. Naveed is the Executive Director of AIT Solutions, co-author Fawad Najam is a doctoral student in Structural Engineering at AIT’s School of Engineering and Technology (SET).

From our November 1971 archives