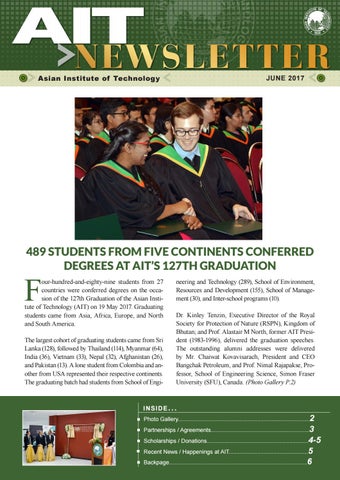 our-hundred-and-eighty-nine students from 27 countries were conferred degrees on the occasion of the 127th Graduation of the Asian Institute of Technology (AIT) on 19 May 2017. Graduating students came from Asia, Africa, Europe, and North and South America. The largest cohort of graduating students came from Sri Lanka (128), followed by Thailand (114), Myanmar (64), India (36), Vietnam (33), Nepal (32), Afghanistan (26), and Pakistan (13). A lone student from Colombia and another from USA represented their respective continents. The graduating batch had students from School of Engi-

The endowment is a result of the initiative of H.E. Ms. Saida Muna Tasneem, Ambassador of Bangladesh to Thailand, and a member of AIT Board of Trustees.

Agreement with IUE-CAS at Xiamen.

The MoU exchange took place at the kick-off meeting of joint projects between the National Research Council of Thailand (NRCT) and the National Natural Science Foundation of China (NSFC) at Xiamen, People’s Republic of China, on 8 May 2017. Under the agreement, IUE-CAS and AIT will conduct joint projects in China and Thailand, including field investigations, laboratory analysis, and land use and land cover interpretation.

Asian Institute of Technology (AIT) and Siam University (SU) have signed a Memorandum of Understanding (MoU) to promote academic cooperation. The MoU was signed by Dr. Pornchai Mongkhonvanit, President, Siam University, and Prof. Worsak Kanok-Nukulchai, President AIT. Signing the MoU on 11 May 2017, Dr. Pornchai expressed his delight at welcoming the AIT delegation at the SU campus, adding that both SU and AIT can joinly offer top quality international engineering programs. Prof. Worsak suggested that the partnership can be accelerated by introducing the Unified Bachelor-Master degree program. The AIT President offered help in designing a curriculum for international students. “Mentoring new universities of the region has always been a mission of AIT,” Prof. Worsak added.

Dr. Chainarong, who is an AIT alumnus, remarked that AIT had provided him, his family, and his company with both education and a network of connections. He wanted to support AIT and contribute towards the development of the region by offering these scholarships.

Prof Za-Chieh Moh donates 1.1 M Baht for Geotechnical Laboratory Prof. Za-Chieh Moh, Member, AIT Board of Trustees has donated a sum of 1,102,093 THB for the Geotechnical Engineering Laboratory. The cheque was handed over by Dr. Chainarong Na Lamphun, File photo: Prof. ZaChieh Moh Secretary-General, Friends of AIT Foundation to Prof. Pennung Warnitchai, Head, Department of Civil and Infrastructure Engineering, School of Engineering and Technology (SET). Prof. Moh, who served as Professor of geotechnical engineering at AIT from 1967 to 1976, and as Vice President and Provost from 1974 to 1976, played a key role

in laying a firm foundation for geotechnical engineering in the Asian region. He was also the Founding President of the Southeast Asian Geotechnical Society (SEAGS). The Geotechnical Engineering Laboratory will formulate a proposal for appropriate utilization of the donation, after consultation with Prof. Moh.

A new Innovation Laboratory (ilab) hosted by AIT Solutions will mentor students, patronize ideas, and promote the finished products in the market. At the inaugural event on 24 May 2017, Dr. Subin Pinkayan, Chairman, AIT Board of Trustees suggested that ilab could emerge as a leading networking hub for innovation in the region. Dr. Subin led a brainstorming session with 40 participants representing international organizations, business sector and industry, academia, researchers and the informal sector.

Announcing this, Mr. Erik Banks, the youngest son of late Prof. Banks said that the new annual “Robert B. Banks Scholarship” will be open to all Master’s candidates, regardless of their field of study, nationality or gender.” CandiFrom AIT Review, April 1977 dates with a high academic performance in their Bachelor’s studies and having cleared AIT’s admission requirements will be eligible for the scholarship. The new annual “Robert and Gunta Banks Prize,” which supersedes the previous Robert Banks Prize, is a cash award of US $500 for students of Environmental Engineering and Management (EEM) at AIT’s School of Environment, Resources and Development (SERD).

CEO and President of Bangchak Petroleum Mr. Chaiwat Kovavisarach, congratulating Mr. Danupol Wetchasirikul from AIT’s energy field of study on his graduation.Danupol is the first Bangchak Scholarship recipient to graduate from AIT.

NEW LANDMARKS AT AIT The AIT Graduation Ceremony also saw the informal unveiling of two new landmarks in the AIT Campus � the AIT Clock Tower and the new AIT gate.

June 2017 edition of the monthly newsletter of the Asian Institute of Technology (AIT).

June 2017 edition of the monthly newsletter of the Asian Institute of Technology (AIT).