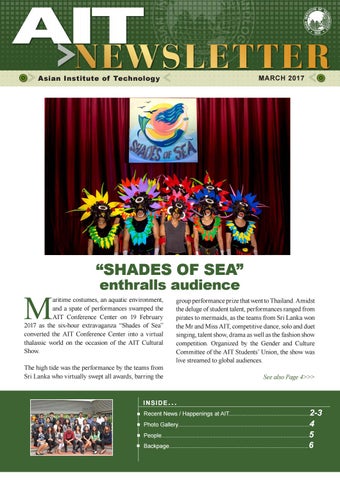 aritime costumes, an aquatic environment, and a spate of performances swamped the AIT Conference Center on 19 February 2017 as the six-hour extravaganza “Shades of Sea” converted the AIT Conference Center into a virtual thalassic world on the occasion of the AIT Cultural Show. The high tide was the performance by the teams from Sri Lanka who virtually swept all awards, barring the

group performance prize that went to Thailand. Amidst the deluge of student talent, performances ranged from pirates to mermaids, as the teams from Sri Lanka won the Mr and Miss AIT, competitive dance, solo and duet singing, talent show, drama as well as the fashion show competition. Organized by the Gender and Culture Committee of the AIT Students’ Union, the show was live streamed to global audiences. See also Page 4>>>

AIT is in a state of normalcy, things are looking up: President informs Board After suffering from the devastating effects of the flood and numerous crises, AIT is now in a state of normalcy, and things have started to look up. This was stated by AIT President Prof. Worsak KanokNukulchai in his report to the AIT Board of Trustees held on 16 February 2017 at the AIT Conference Center. The AIT President highlighted the achievements of AIT in terms of gaining the trust of the host country government, recommencement of the Royal Thai Government scholarships, AIT’s performance in ranking systems, repair and renovation work in the campus, the new AIT library and forthcoming projects. The entire text

of his address can be read at this link: https://goo.gl/oCnKeQ

ADB presents PPP collaboration opportunities in the Asia-Pacific region The Asia-Pacific region can benefit from Public-Private Partnerships (PPP), and the Asian Development Bank (ADB) is helping shape PPP as a key conduit for greater infrastructure investment. Sharing the PPP scenario in the region was a two-member team from the ADB team at an interaction session organized at AIT on 16 February 2017. Led by Ryuichi Kage and Amir J Qari of the ADB, the interaction session highlighted how the ADB has established a dedicated Office of Public-Private Partnership (OPPP) to support and enable governments to secure greater private investment and generate economic growth in the region.

Dr. Bindu Lohani, former ADB Vice President mentioned the role played by both AIT and ADB in the development of the Asia-Pacific region.

Agreement signing between AIT and SU.

development, and that is why our alumni are spreading wings all over universities in Asia, “ Prof. Worsak remarked.

Engage in lifelong learning, become global citizens: AIT President It is important to engage in lifelong learning and to acquire knowledge at every stage in life. Lifelong learning has assumed increased imporOpen House participants. tance since what we learn today may no longer remain relevant in the next four to five years. This was the message of AIT President Prof. Worsak KanokNukulchai on the occasion of “Open House” organized at AIT on 17 February 2017. Also addressing the students was AIT alumnus Dr. Amornpon Changsuphan, Scientist, Ministry of Science and Technology, who spoke about how AIT had impacted his life. Also participating in the AIT Open House were the President of Siam University Prof. Pornchai Mongkhonvanit, representatives of the Thailand’s Military Research and Development Centre (MRDC), besides a strong representation of Chinese students.

Dr. Weerakorn Ongsakul has been promoted to the rank of Professor. His elevation was confirmed at the meeting of the AIT Board of Trustees held on 16 February 2017.

He joined AIT as an Associate Professor in February 1978 and was promoted to the rank of a Professor in 1983. Having served as a Professor at AIT for about 16 years, he graduated 17 Ph.D. and 132 master’s students.

​ r. Barbara Igel has been D promoted to the rank of Professor. Her elevation was announced following approval by the AIT Board of Trustees in its meeting held on 16 February 2017.

Dr. Igel joined the School of Management as an Assistant Professor and Program Coordinator of the joint program with Punjab College of Business Administration (PCBA) in 1993. She obtained her Dr. rer. pol. (~PhD Economics), Freie Universitaet Berlin (West) in 1989. Dr. Igel took both her Master’s and Bachelor’s degrees, viz. Dipl. Volkswirt (~MA Economics) and Vordiplom (~BA Economics) from the Technische Universitaet Berlin (West) in 1984 and 1982, respectively. She has served as Dean of the School of Management (SOM) from 2008 to June 2013.

Prof. Tawatchai Tingsanchali obtained his Doctor of Engineering in Water Resources Engineering from AIT in 1975. He joined AIT as an Assistant Professor in 1975 and was promoted to the rank of a Professor in 1988. Having served as a Professor at AIT for about 19 years, he graduated 13 Ph.D. and 128 Master’s students.

New SU Team Takes Over A new Students’ Union team led by Ms.Piraya Lueprasitsakul (sitting, front row, fifth from left) has taken over. The team photograph was clicked in the Knowledge Garden of the AIT Library.

March 2017 edition of the monthly newsletter of the Asian Institute of Technology (AIT).

March 2017 edition of the monthly newsletter of the Asian Institute of Technology (AIT).