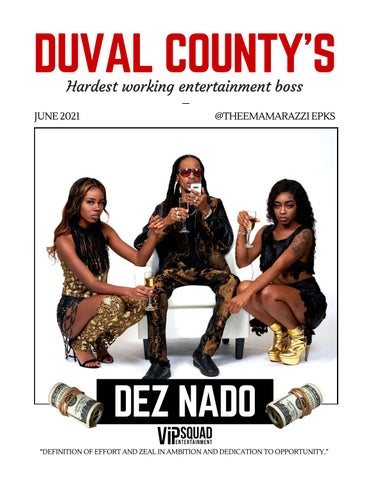 DEZ NADO “DEFINITION OF EFFORT AND ZEAL IN AMBITION AND DEDICATION TO OPPORTUNITY.”

Dez Nado is taking charge of his music career and proving that artistry doesn’t have to be one-dimensional. When the artist from Jacksonville, Florida isn’t in a recording booth, he’s busy writing and producing for television and thriving as an entrepreneur with VIPSquad Ent. His new single titled, “Bossy,” is an infectious radio-ready hit in the making. In his youth, he was a part of a hip hop group of pre-teens and teen-aged rappers along with his siblings. He credits them for teaching him how to write. They recorded on “high-tech” Talkboy recorders. Although the group later dissolved, his love of music and knack for writing stuck. “My brother and cousin wrote my first rap song,” says Dez Nado, who grew up listening to Andre 3000, KRS One, Rakim and Big L. “It sparked my interest and I got into it.” DEZ NADO / 3

@THEEMAMARAZZI EPKS Dez Nado now prides himself on writing his own material-something he feels is important to becoming a viable artist. “I write my own verses, hooks and my own arrangements,” said the artist with Jamaican-Panamanian roots. “I get my inspiration from all over.” The artist-producer created a mantra of his Dez Nado stage name. His name means, “Definition of Effort and Zeal iN Ambition and Dedication to Opportunity.” And over the span of his career he has created many opportunities for himself and other independent creatives. During his college years he DJ’d and later launched “Duval Spring Fest.” It became north Florida/south Georgia’s largest all-indie annual platform. He still organizes and promotes the fest. Dez’s immense work-ethic garnered him opportunities to open for major shows and helped him be awarded several times over. DuvalCountyLuv.com, which was one of Jacksonville’s premier rap websites, gave him the title of “Jacksonville’s Grinder of the Week” for several weeks between 2006-2009. He also received awards through the “Underground Oscars” which was created to uplift independent artists. However, after being recognized by Source Magazine executives for being one of his city’s top performers, he suffered a near-death experience. Dez was shot in the chest just inches away from his heart.

Grateful for his life being spared, he refocused and changed his content. In the aftermath he earned a college degree. But eventually he returned to the studio. His first single titled, “No Hands,” earned him a distribution deal through KKR/Island/Def Jam for a follow-up album titled “No Hands 2” in 2011. By 2019, Dez was back to the basics of hip hop which made music fun, inspiring and positive. Dez Nado remixed the “All That” 90s tv theme song and created an Intro song for his “Lpyh Ssnz: The 90s Tape” music project. Although inspired by the earlier years of hip hop, Dez Nado enjoys making original music. He even likes seeing younger artists sample old skool music but worries about what the impact will be years from now.

The incident inspired Dez to abandon the negative and destructive messages of his music-content which is all-toofamiliar in hip hop music.

Dez Nado has helped to create two shows that highlight the hard work of independent creatives and entrepreneurs.

@THEEMAMARAZZI EPKS “I think it’s beautiful to see the younger generation sampling from the older generation,” he says. “But two decades from now are they going to be sampling a sample of a sample?” Dez Nado wants to bridge the gap between hip hop heads and the people who may not know about the golden era of hip hop. He uses his music to do just that. However, he recognizes the importance of allowing this generation an opportunity to create their own unique sound--contributing to the never-ending evolution of hip hop.

Today’s artists are thriving by using platforms like TikTok to grow their song’s popularity. Some have criticized this new wave but Dez Nado says, “If it’s a hit, it’s a hit.” “They were doing the same thing back in the 90’s,” said Dez Nado. “They just didn’t have TikTok but dance music was what was driving the sound back then.” As an executive-producer Dez Nado highlights other independent creatives and the hard work they put into their pursuits in a YouTube TV Series called “Life and Grind.” He also produces LIVE New Jax City which shows the Florida entertainment scene. Life and Grind started out with Dez sharing about his own behind-the-scenes work but sparked the idea for him to follow the journey of other hard-working artists, comedians, actors and entertainer-entrepreneurs. The shows have a great following and once appeared on Bounce TV in the Florida market. Dez Nado is Duval County’s ultimate entertainmentboss. If his ironclad resume is any indication of what’s to come, then we know he has no plans of slowing down.

Dez Nado is taking charge of his music career and proving that artistry doesn’t have to be one-dimensional. When the artist from Jacksonville, Florida isn’t in a recording booth, he’s busy writing and producing for television and thriving as an entrepreneur with VIPSquad Ent. His new single titled, “Bossy,” is an infectious radio-ready hit in the making. 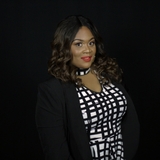