Crop growth and water use under deep tillage 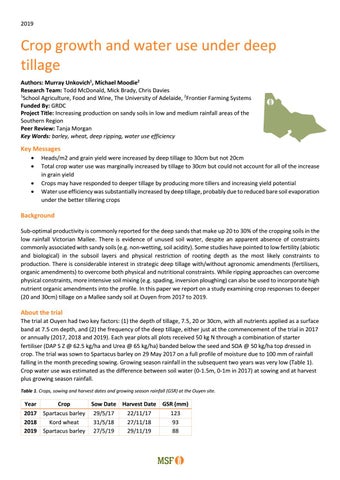 Heads/m2 and grain yield were increased by deep tillage to 30cm but not 20cm Total crop water use was marginally increased by tillage to 30cm but could not account for all of the increase in grain yield Crops may have responded to deeper tillage by producing more tillers and increasing yield potential Water use efficiency was substantially increased by deep tillage, probably due to reduced bare soil evaporation under the better tillering crops

Background Sub-optimal productivity is commonly reported for the deep sands that make up 20 to 30% of the cropping soils in the low rainfall Victorian Mallee. There is evidence of unused soil water, despite an apparent absence of constraints commonly associated with sandy soils (e.g. non-wetting, soil acidity). Some studies have pointed to low fertility (abiotic and biological) in the subsoil layers and physical restriction of rooting depth as the most likely constraints to production. There is considerable interest in strategic deep tillage with/without agronomic amendments (fertilisers, organic amendments) to overcome both physical and nutritional constraints. While ripping approaches can overcome physical constraints, more intensive soil mixing (e.g. spading, inversion ploughing) can also be used to incorporate high nutrient organic amendments into the profile. In this paper we report on a study examining crop responses to deeper (20 and 30cm) tillage on a Mallee sandy soil at Ouyen from 2017 to 2019.

About the trial The trial at Ouyen had two key factors: (1) the depth of tillage, 7.5, 20 or 30cm, with all nutrients applied as a surface band at 7.5 cm depth, and (2) the frequency of the deep tillage, either just at the commencement of the trial in 2017 or annually (2017, 2018 and 2019). Each year plots all plots received 50 kg N through a combination of starter fertiliser (DAP S Z @ 62.5 kg/ha and Urea @ 65 kg/ha) banded below the seed and SOA @ 50 kg/ha top dressed in crop. The trial was sown to Spartacus barley on 29 May 2017 on a full profile of moisture due to 100 mm of rainfall falling in the month preceding sowing. Growing season rainfall in the subsequent two years was very low (Table 1). Crop water use was estimated as the difference between soil water (0-1.5m, 0-1m in 2017) at sowing and at harvest plus growing season rainfall. Table 1. Crops, sowing and harvest dates and growing season rainfall (GSR) at the Ouyen site.

Results &amp; Discussion Crop establishment, growth and grain yield In the first year there were no problems with establishment of crops on the deeper tilled plots, but repeated (annual) tillage to 30cm resulted in reduced plant densities in 2018 and 2019 compared to the control plots (Table 2). However, this did not result in reduced growth of the tilled plots relative to the controls. In 2017 tiller density (Table 2) was 50-60/m2 higher under 30cm tillage but not significantly so but head numbers were significantly higher in 2017 by a considerable margin, indicating that more tilers produced heads in the deep ripped than control treatments (Table 2). This increased tiller number following 30cm tillage persisted across all years, although not statistically significantly so in 2018 or 2019. Grain yield (Table 2) was significantly increased by the 30cm tillage treatments in 2017 (barley), 2018 (wheat) and by the repeated 30cm tillage in 2019 (barley), with increases being &gt;30% in 2017 and 2018 and 20-40% in 2019. Grain yields of the pre-drilled (20cm) treatments were not significantly different to the control plots. It is worth noting that the pre-drilling to 20 cm had more of a slotting rather than loosening effect on the soil and therefore did not relive penetration resistance of soil profile while the deep ripping did. Table 2. Plant and head density, shoot biomass and grain yield of barley and wheat in response to tillage treatment at Ouyen 2017-2019. Statistically significant differences between treatments within years are indicated. Tiller density only measured in 2017.

Water use and water use efficiency Crop water use was significantly higher in the deep tillage plots than in the controls in 2017 (13mm) and 2019 (1119mm), but not statistically significantly so in 2018. If one assumed that all of this additional water use was used to sponsor grain yield at 22 kg/ha/mm then 286 kg extra grain could have been produced in 2017 in the 30cm deeptilled plots, and 242 (deep tilled once) 418 kg/ha (deep tilled annually) in 2019. However, these amounts are not sufficient to account for the increased grain yields observed Table 2 (&gt;700 kg in 2017 and 310-560 kg in 2019). Crop transpiration, the amount of water used by the crop canopy, can be estimated from the crop biomass data, assuming 48.7 kg of shoot dry matter produced per mm of water transpired for wheat and 45.3 kg/mm for barley (see Unkovich et al. 2018 and Rodriguez and Sadras 2007). We can then partition total crop water use between transpiration and evaporation from soil under the crop canopy by a simple difference (Es=total water use transpiration). This analysis would suggest that bare soil evaporation was decreased to a greater extent than total

Page 3 water use was increased in the deep tilled plots (Table 3). The data demonstrate that the big effect of the deep tillage (30cm) treatment was to increase crop transpiration at the expense of bare soil evaporation, increasing water use efficiency by reducing unproductive water loss. Table 3. Seasonal crop water use and estimates of crop transpiration (T) and bare soil evaporation (Es) and water use efficiency in the Ouyen trial. All values are mm of water. Statistically significant differences between treatments within years are in total water use are indicated.

To highlight this we have plotted the water use efficiencies of the control and deep tillage (30cm) treatments for 2017 in Figure 1 in the “French &amp; Schultz” format, using the bare soil evaporation (Es) values from Table 3 as the X axis intercept terms and the slope calculated as grain yield/transpiration, with the transpiration (T) term coming from Table 3 also. This figure shows that the water use efficiency is improved by moving the line to the left in the deep tilled (30cm) treatment, which shifts the WUE line upwards (more yield) for the same amount of total water used. We also note that the slope of the line is slightly less in the deep tilled (30cm) treatment.

A large part of the deep ripping treatment effect appears to be in reducing bare soil evaporation and this has been observed previously in the Mallee (Sadras et al. 2005), but how is this achieved. Bare soil evaporation is reduced when crop canopies shade the soil, resulting in radiation striking the crop and drawing water up through the shoots (transpiration). Our dataset suggests that tillering may be directly increased by the deep ripping treatment, independent of a slight increase in soil water availability at depth. Such responses have been observed previously in pot studies when compacted soil was ripped (Atwell 1990).

Implications for commercial practice It would appear that in the trial at Ouyen that deep ripping may be increasing crop tillering, in both barley and wheat, reducing bare soil evaporation and providing a big boost to water use efficiency. Further work is required to ascertain if tillering is constrained in compacted soils and if so, if deep tillage is the most effective way to increase it.

Acknowledgements This research is a collaborative project between the GRDC, CSIRO, the University of South Australia, the SA state government through Primary Industries and Regions SA, Mallee Sustainable Farming Inc, AgGrow Agronomy and Trengove Consulting. The research undertaken as part of this project is made possible by the significant contributions of growers through both trial cooperation and the support of the GRDC, the author would like to thank them for their continued support.

Crop growth and water use under deep tillage