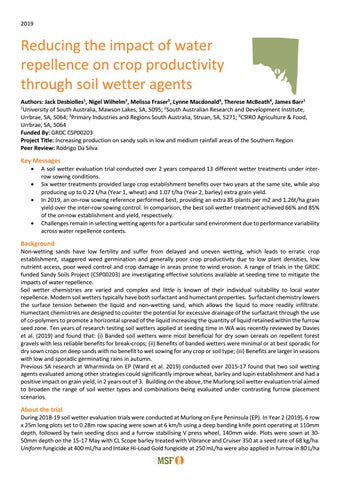 Background Non-wetting sands have low fertility and suffer from delayed and uneven wetting, which leads to erratic crop establishment, staggered weed germination and generally poor crop productivity due to low plant densities, low nutrient access, poor weed control and crop damage in areas prone to wind erosion. A range of trials in the GRDC funded Sandy Soils Project (CSP00203) are investigating effective solutions available at seeding time to mitigate the impacts of water repellence. Soil wetter chemistries are varied and complex and little is known of their individual suitability to local water repellence. Modern soil wetters typically have both surfactant and humectant properties. Surfactant chemistry lowers the surface tension between the liquid and non-wetting sand, which allows the liquid to more readily infiltrate. Humectant chemistries are designed to counter the potential for excessive drainage of the surfactant through the use of co-polymers to promote a horizontal spread of the liquid increasing the quantity of liquid retained within the furrow seed zone. Ten years of research testing soil wetters applied at seeding time in WA was recently reviewed by Davies et al. (2019) and found that: (i) Banded soil wetters were most beneficial for dry sown cereals on repellent forest gravels with less reliable benefits for break-crops; (ii) Benefits of banded wetters were minimal or at best sporadic for dry sown crops on deep sands with no benefit to wet sowing for any crop or soil type; (iii) Benefits are larger in seasons with low and sporadic germinating rains in autumn. Previous SA research at Wharminda on EP (Ward et al. 2019) conducted over 2015-17 found that two soil wetting agents evaluated among other strategies could significantly improve wheat, barley and lupin establishment and had a positive impact on grain yield, in 2 years out of 3. Building on the above, the Murlong soil wetter evaluation trial aimed to broaden the range of soil wetter types and combinations being evaluated under contrasting furrow placement scenarios.

During 2018-19 soil wetter evaluation trials were conducted at Murlong on Eyre Peninsula (EP). In Year 2 (2019), 6 row x 25m long plots set to 0.28m row spacing were sown at 6 km/h using a deep banding knife point operating at 110mm depth, followed by twin seeding discs and a furrow stabilising V press wheel, 140mm wide. Plots were sown at 3050mm depth on the 15-17 May with CL Scope barley treated with Vibrance and Cruiser 350 at a seed rate of 68 kg/ha. Uniform fungicide at 400 mL/ha and Intake Hi-Load Gold fungicide at 250 mL/ha were also applied in furrow in 80 L/ha

The 2019 barley crop establishment at 5 weeks after sowing is shown in Figure 1a. The inter-row control established at 12% of seeds sown (27 plants/m2, respectively), indicating poor conditions for crop establishment in this severely water repellent sand, while the on-row sowing treatment (with no wetter) offered a significant establishment benefit in excess of 400% (+85 plants/m2). In contrast, the soil wetters on inter-row sown treatments increased barley crop establishment by 17 plants/m2 on average, with a range of 0-56 plants/m2. The impact of soil wetter treatments on crop establishment was similar in both years of the trial, as confirmed by a strongly positive correlation between results in each year (r = +0.849, P&lt;0.001, data not shown). Interestingly, all treatments with only furrow surface applied wetters had a limited effect on crop establishment at Murlong, while the two treatments with a seed zone applied humectant (SE14® or RainDrover) performed well. Overall, 4 out of 6 seed zone + furrow surface wetter combinations provided a significant establishment benefit compared with the control. Combining a surfactant on the furrow surface (FS, Aquaforce) with a humectant in the seed zone (SZ, SE14®) provided a synergistic response in 2019 (where the treatment combining wetters had a greater effect than adding the effects of the two separate wetter treatments independently). A similar combination based on H2FloTM (FS) and Raindrover (SZ) did not synergise, with the performance driven mostly by the seed zone wetter. In 2019 (decile 1 GSR) under inter-row sowing there were significant barley grain yield responses to soil wetters (Figure 1b). The grain yield in the inter-row sown control averaged 1.10 t/ha. On the inter-row sown plots, soil wetter treatment yield increases ranged from +23 to +97 %, with a maximum response of +1.07 t/ha. In comparison, the onrow control yielded the highest (x2.15 the inter-row control), providing a 1.26 t/ha grain yield benefit. A strong positive correlation (r = +0.883, P&lt;0.01, data not shown) was obtained between grain yield and plant density at 36 DAS. Overall, the treatment grain yield responses were similar across both years, with a strong positive correlation (r = +0.815, P&lt;0.01, data not shown). This is encouraging and suggest that an effective wetter with consistent effects across multiple years, once identified, may be safely recommended to farmers in that environment. Table 2 provides a synopsis identifying the top 6 performers overall for both crop establishment and grain yield at Murlong. This evaluation was conducted using a precise split seeding system (knife point + independent dual seeding discs) where co-location of seed zone wetter and seed was assured and a stable wide furrow was provided for furrow surface wetters, applied with a nozzle over a 30mm wide band.

Implications • The top 6 soil wetter treatments used at Murlong were consistent across both years. Anecdotal evidence suggests that some of the lesser performing wetting agents have performed well in other areas of the state. A broader evaluation across other types of water repellent sands is therefore advisable. The finding that product chemistry had a consistent impact on effectiveness at this site over 2 years, is encouraging, that once a suitable product is found for a particular sand environment it may prove reliable over many seasons. • Additional factors that may influence the cost-effectiveness of a soil wetter include optimising-its furrow location, application rate and water volume per ha; these factors may require further experimentation on a product by product basis. • The yield responses to soil wetters in 2019 were higher than those recorded at this site in 2018 and may have been influenced by the integrity of water harvesting furrows achieved by the seeding system. They remained stable over the season in 2019, while early furrow backfilling was experienced over a challenging post-seeding period in 2018. • The establishment and yield benefits achieved with wetters applied to an inter-row sown system were not as great as those delivered with an on-row seeded system without wetters. Analysis of the combined effects of the seeding system and wetters is available in the next article on seeder strategies.