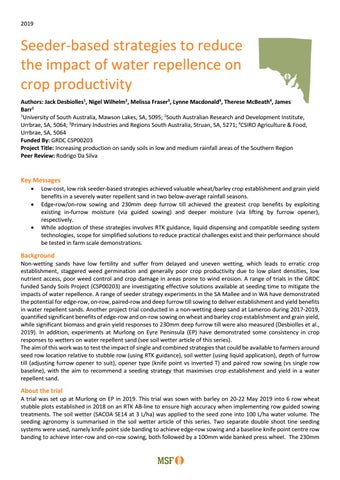 Background Non-wetting sands have low fertility and suffer from delayed and uneven wetting, which leads to erratic crop establishment, staggered weed germination and generally poor crop productivity due to low plant densities, low nutrient access, poor weed control and crop damage in areas prone to wind erosion. A range of trials in the GRDC funded Sandy Soils Project (CSP00203) are investigating effective solutions available at seeding time to mitigate the impacts of water repellence. A range of seeder strategy experiments in the SA Mallee and in WA have demonstrated the potential for edge-row, on-row, paired-row and deep furrow till sowing to deliver establishment and yield benefits in water repellent sands. Another project trial conducted in a non-wetting deep sand at Lameroo during 2017-2019, quantified significant benefits of edge-row and on-row sowing on wheat and barley crop establishment and grain yield, while significant biomass and grain yield responses to 230mm deep furrow till were also measured (Desbiolles et al., 2019). In addition, experiments at Murlong on Eyre Peninsula (EP) have demonstrated some consistency in crop responses to wetters on water repellent sand (see soil wetter article of this series). The aim of this work was to test the impact of single and combined strategies that could be available to farmers around seed row location relative to stubble row (using RTK guidance), soil wetter (using liquid application), depth of furrow till (adjusting furrow opener to suit), opener type (knife point vs inverted T) and paired row sowing (vs single row baseline), with the aim to recommend a seeding strategy that maximises crop establishment and yield in a water repellent sand.

A trial was set up at Murlong on EP in 2019. This trial was sown with barley on 20-22 May 2019 into 6 row wheat stubble plots established in 2018 on an RTK AB-line to ensure high accuracy when implementing row guided sowing treatments. The soil wetter (SACOA SE14 at 3 L/ha) was applied to the seed zone into 100 L/ha water volume. The seeding agronomy is summarised in the soil wetter article of this series. Two separate double shoot tine seeding systems were used, namely knife point side banding to achieve edge-row sowing and a baseline knife point centre row banding to achieve inter-row and on-row sowing, both followed by a 100mm wide banked press wheel. The 230mm

A dry 110-120mm thick repellent top layer was present in the inter-row zone at seeding but with consistent moisture below 160-170mm, which was separated by a patchy transition zone. In contrast, the existing stubble row zone had good moisture below 40-50mm dry top layer. Measurements quantified 9mm more water stored in the 0-400mm layer in the stubble row zone compared to the inter-row zone, with the majority occurring in the top 250mm layer. This moisture benefit in the stubble row was consistent with observations made in water repellent sands at Lameroo during 2018/19, which ranged between 7-9mm of extra water stored on the 0-400mm layer in both seasons. On-row sowing alone increased plant density by 39 plants/m2 over edge-row sowing and by 95 plants/m2 over interrow sowing (Figure 1). Edge-row sowing results were much more variable indicating the sensitivity of this strategy to an optimum position relative to the stubble row and representing a greater difficulty for farm adoption. Inter-row sowing crop establishment was 21 plants/m2 worse than the equivalent control under the soil wetter evaluation trial (see soil wetter article), which had used a more accurate seeding system. The placement of 6N+12P fertiliser with the seed created a small additional loss to an already very poor control crop establishment (at 0.28m row spacing, approx. 10% seedbed utilisation). The addition of soil wetter increased plant density by 22 and 29 plants/m2 for inter-row and edge-row sowing, respectively (Figure 1.). In contrast, no soil wetter benefits were measured under on-row sowing, where the stubble row soil was already sufficiently moist to achieve good germination on its own. The benefit of the soil wetter (SACOA SE14 at 3L/ha) under inter-row sowing was slightly less (i.e. 22 plants/m2 vs 36 plants/m2 Improvement) than that measured in the soil wetter evaluation trial (see soil wetter article), which may be due to the better seed placement and water harvesting furrow quality obtained by the tine-disc-wide press wheel seeding system of that trial. This perhaps emphasises the importance of considering seeder set up issues in combination with wetter application to extract the best possible response from the wetter. Deep furrow till to 230mm depth had a major positive impact (extra +74 plants/m2) under inter-row sowing with soil wetter, where deeper moisture delving most benefited an otherwise dry seed zone (Figure 1). Deep furrow till did not improve establishment under edge-row sowing where a 26 plants/m2 decrease was recorded. This may be due to the long steep knife point to reach 230mm depth likely less effective at delving moisture up and the extra disturbance also affecting seed placement uniformity with this compact side banding unit. Deep furrow till was not evaluated under on-row sowing. Under on-row sowing with soil wetter, the paired row system did not improve crop establishment over the single row equivalent, both using a knife point opener.

Figure 1. Impacts of various inter-row, edge-row and on-row sowing strategies on crop establishment at 5 weeks after sowing in barley at Murlong in 2019. The error bars represent the l.s.d. at p=0.05 which was 21 plants/m2.

Figure 2. Impacts of various inter-row, edge-row and on-row sowing strategies on barley grain yield in 2019 at Murlong. The error bars represent the l.s.d. at p=0.05 which was 0.275 t/ha.

Seeder-based strategies for reducing the impact of water repellence delivered large benefits in crop establishment and also productivity in terms of grain yield. The strategies evaluated focussed on accessing the stored moisture within existing stubble rows, the deeper moisture found below a dry non-wetting top layer and maximising inseason rainfall infiltration and use. Specific technologies were required to implement these strategies, such as: precision guidance (on-row, edge-row sowing), liquid dispensing (soil wetters), seeding system attributes (adjustable depth of furrow till, stable waterharvesting furrows, precision placement of seed and liquids in furrow, paired row seeding, seed-fertiliser separation). Combining technologies can deliver additive crop establishment and productivity benefits, thus have the potential to form the basis of best-practice on-farm. Adoption of some strategies, however, is likely to be limited if major investments are required by the grain grower. Practical complications include issues such as water repellent sands occupying only part of larger paddocks and larger scale machinery often achieving variable tracking accuracy. Some of the benefits summarised above could be achieved with low-technology options such as upgrading seeders for deeper moisture delving capability and seeding (without RTK guidance) at a small angle to existing stubble rows, in order to maximise the benefits of furrow moisture access. Project validation activities in 2020 will work with growers to evaluate which seeder-based strategies can be effectively implemented at farmer scale in different sand environments.