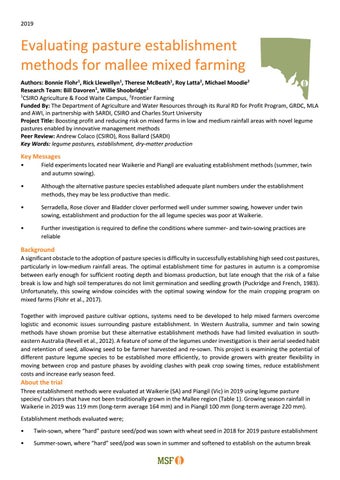 Although the alternative pasture species established adequate plant numbers under the establishment methods, they may be less productive than medic.

Serradella, Rose clover and Bladder clover performed well under summer sowing, however under twin sowing, establishment and production for the all legume species was poor at Waikerie.

Background A significant obstacle to the adoption of pasture species is difficulty in successfully establishing high seed cost pastures, particularly in low-medium rainfall areas. The optimal establishment time for pastures in autumn is a compromise between early enough for sufficient rooting depth and biomass production, but late enough that the risk of a false break is low and high soil temperatures do not limit germination and seedling growth (Puckridge and French, 1983). Unfortunately, this sowing window coincides with the optimal sowing window for the main cropping program on mixed farms (Flohr et al., 2017). Together with improved pasture cultivar options, systems need to be developed to help mixed farmers overcome logistic and economic issues surrounding pasture establishment. In Western Australia, summer and twin sowing methods have shown promise but these alternative establishment methods have had limited evaluation in southeastern Australia (Revell et al., 2012). A feature of some of the legumes under investigation is their aerial seeded habit and retention of seed, allowing seed to be farmer harvested and re-sown. This project is examining the potential of different pasture legume species to be established more efficiently, to provide growers with greater flexibility in moving between crop and pasture phases by avoiding clashes with peak crop sowing times, reduce establishment costs and increase early season feed.

About the trial Three establishment methods were evaluated at Waikerie (SA) and Piangil (Vic) in 2019 using legume pasture species/ cultivars that have not been traditionally grown in the Mallee region (Table 1). Growing season rainfall in Waikerie in 2019 was 119 mm (long-term average 164 mm) and in Piangil 100 mm (long-term average 220 mm). Establishment methods evaluated were; •

Twin-sown, where “hard” pasture seed/pod was sown with wheat seed in 2018 for 2019 pasture establishment

Summer-sown, where “hard” seed/pod was sown in summer and softened to establish on the autumn break

Autumn-sown (control treatment), where “soft” seed was sown on the break of the season

At each site plant number/m2 was recorded in June, and two measures of biomass production were recorded. The experiment was a general treatment structure in randomised blocks with sowing method and cultivar as treatment factors with four replications and designed and analysed using the Genstat 19 interface (VSN International, 2013).

Results &amp; Discussion Establishment In Waikerie the seasonal break (&gt; 15 mm) occurred on 9 May with 20 mm rainfall. Summed rainfall prior to 9 May 2019 was 22 mm. In Piangil, the seasonal break occurred on 2 May with 19 mm rainfall, with summed rainfall prior to 2 May of 17 mm. At both sites all establishment treatments emerged within 2 weeks of each other. Sowing method had a significant effect on plant density at both sites (Figure 1). The targeted population for sown pastures is typically 150-200 plants/m2.

Figure 2: Biomass production in 2019 at Waikerie in the establishment treatments autumn sowing (●), twin-sowing (○) and summer-sowing (■), vertical line is LSD (5%) = 0.1, P&lt;.001. While establishment counts were higher for summer and autumn sowing at Waikerie, biomass production tended to be higher at Piangil (Figure 3). The twin sown treatments at Piangil had establishment counts similar to the other sowing techniques, however plant density did not necessarily directly relate to biomass production. For example, there was higher plant density in summer-sown serradella, but twin-sown treatments produced similar biomass. Medic produced similar biomass in the autumn- and twin-sowing treatments. Production of trigonella and gland clover was generally low, indicating they are not as well adapted to the soil type.

Figure 3. Biomass production in 2019 at Piangil in the establishment treatments autumn sowing (●), twin-sowing (○) and summer-sowing (■), vertical line is LSD (5%) = 0.41, 0.44 respectively, P&lt;.05. Results from 2019 indicate that twin- and summer-sowing may be viable establishment methods for the Mallee region, however they might not be suitable for all legume species. In both environments Margurita serradella gained the greatest advantage from the alternative establishment methods. Results for PM-250 medic were inconsistent, with twin-sowing inferior at Waikerie and summer-sowing inferior at Piangil. Given that all treatments emerged on similar dates, and there was very little summer rainfall in 2019, further exploration of the methods are required under a range of growing seasons such that risks and/or benefits associated with earlier seasonal or false breaks can be evaluated. This experiment will be repeated in Lameroo, SA in 2020. Weed management An important consideration with twin- and summer-sowing is weed control. At Waikerie there were significantly more broad-leaf weeds in the twin- and summer-sown plots compared to autumn-sown plots (data not shown). On 1 August weed dry-matter was 3.6 vs. 44 vs. 50 g/m2 for autumn, summer and twin treatments respectively (P&lt;.001). Autumn-sown plots received a knock down spray at sowing, while twin and summer sown plots did not. Twin- and summer- sowing methods should only be considered for paddocks with low weed levels.

Page 2 Seasonal analysis To understand the likely suitability of summer- and twin-sowing to Mallee environments, historic climate records (1970-2018) were analysed to reveal the distribution of when the seasonal break occurred. Using the APSIM model (version 7.10) and historic weather records the mean break of a season was predicted (7-day period where rainfall exceeds evaporation; Unkovich 2010). The analysis revealed that Lameroo has the earliest median break and a higher probability of a break occurring before 25 April, while Piangil and Waikerie typically have a later seasonal break. In environments with a greater probability of an early seasonal break, summer-sowing will likely be more beneficial as a longer growing season can be exploited more often (Figure 4). In environments where the seasonal break is often later, there is greater risk of seed losses or burial, rhizobia death and exposure to pathogens. A

Figure 4. A. Box and whisker plots showing 25th-75th percentiles of when the autumn break occurred in the historic data set 1970-2018 using the Unkovich (2010) rule B. the probability of the seasonal break occurring on 25 April.

Implications for commercial practice Alternative establishment methods have demonstrated potential in the Mallee, however they are not suitable for all legume species. The alternative legume species Serradella, Rose clover and Bladder clover have demonstrated potential for summer sowing, however establishment and production under twin sowing was low at Waikerie. While PM-250 medic was the highest biomass legume, it is not yet clear which establishment technique will consistently give the best results. This is worthy of further investigation given the potential to provide growers with greater sowing flexibility and reduced seed costs.

Acknowledgements This work is in collaboration with the SARDI team; Ross Ballard, David Peck and Jeff Hill. The research reported in this paper is made possible by significant contributions of growers through both trial cooperation and the support of GRDC (GRDC project code 9175959). We thank the Schmidt and Haydon families for hosting the field experiments.