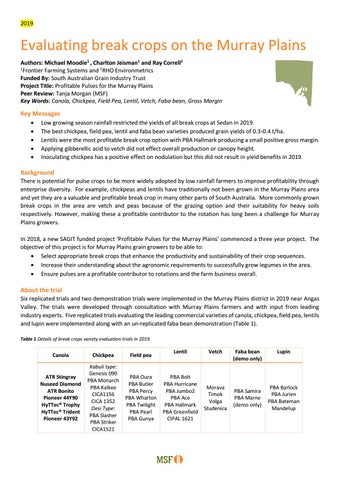 Low growing season rainfall restricted the yields of all break crops at Sedan in 2019. The best chickpea, field pea, lentil and faba bean varieties produced grain yields of 0.3-0.4 t/ha. Lentils were the most profitable break crop option with PBA Hallmark producing a small positive gross margin. Applying gibberellic acid to vetch did not effect overall production or canopy height. Inoculating chickpea has a positive effect on nodulation but this did not result in yield benefits in 2019.

Background There is potential for pulse crops to be more widely adopted by low rainfall farmers to improve profitability through enterprise diversity. For example, chickpeas and lentils have traditionally not been grown in the Murray Plains area and yet they are a valuable and profitable break crop in many other parts of South Australia. More commonly grown break crops in the area are vetch and peas because of the grazing option and their suitability for heavy soils respectively. However, making these a profitable contributor to the rotation has long been a challenge for Murray Plains growers. In 2018, a new SAGIT funded project ‘Profitable Pulses for the Murray Plains’ commenced a three year project. The objective of this project is for Murray Plains grain growers to be able to:  Select appropriate break crops that enhance the productivity and sustainability of their crop sequences.  Increase their understanding about the agronomic requirements to successfully grow legumes in the area.  Ensure pulses are a profitable contributor to rotations and the farm business overall.

About the trial Six replicated trials and two demonstration trials were implemented in the Murray Plains district in 2019 near Angas Valley. The trials were developed through consultation with Murray Plains farmers and with input from leading industry experts. Five replicated trials evaluating the leading commercial varieties of canola, chickpea, field pea, lentils and lupin were implemented along with an un-replicated faba bean demonstration (Table 1). Table 1.Details of break crops variety evaluation trials in 2019.

Page 2 A vetch management trial was also established at the site to investigate the effect of gibberellic acid and the timing of application of dry mater production. ProGibb®SG was applied at 20 g/ha either at seeding, early winter or late winter. There were four varieties of vetch included in the trial: Studenica, Volga, Timok and Morava. Dry matter was measured on 20 September 2019 when vetch varieties were in early pod development. A second management trial was established to compare inoculation products. Chickpea (Genesis 090) was sown without inoculant, with a peat slurry (BASF Nodulator) or peat granule (TagTeam Granular). Both the slurry and granular inoculants were applied at the recommended and twice recommended rates. Peat slurry was also applied as an in-furrow liquid stream. All inoculation products were group N which is specific to chickpea. All trials were sown on the 23 May 2019. All trials were sown with 50 kg ha-1 of Granulock Z. Weeds were controlled with a knockdown application of glyphosate prior to cropping with in-crop grass weeds controlled with clethodim and haloxyfop. Broadleaf weeds were managed with pre-emergent herbicides specific to each crop (Table 1). Insects were controlled with Trojan insecticide during spring. All trials were harvested on the 18th November 2019. Gross Margins were calculated for each crop type using the yield of the best performing treatment from the six variety trials. Gross margins were calculated using the Rural Solutions Farm Gross Margin and Enterprise Planning Guide. Gross margins used the January grain price from the year following each trial (2020).

Results &amp; Discussion Seasonal conditions were very challenging in 2019 with approximately 90 mm of growing season rainfall recorded at the site. Furthermore, rainfall events were often small and infrequent and as a result productivity of the break crops was low. Chickpea Varieties Chickpea yields were very low and there was no significance between varieties (Figure 1). The overall yield across all varieties was 260 kg/ha. There were significant differences in grain size with desi types (PBA Striker, PBA Slahser and CICA1521) having significantly smaller grain the Kabuli types. Of the Kabuli varieties, CICA1352 had the largest grain sizer and Genisis090 the smallest. Kalkee, PBA Monarch and CICA1156 all produced similar size grain.

Field Pea Varieties The highest yielding varieties were PBA Percy and PBA Pearl which both yielded significantly higher than the other treatments (Figure 2). All other varieties yielded less than 300 kg/ha. Interestingly PBA Twilight was the lowest yielding variety but was the highest yielding treatment in 2018. When the site was visited on the 20 th September 2019 a significant amount of frost damage was visible, and therefore this may have affected the true yield potential.

Lentil Varieties The highest yields were from Hallmark (391 kg/ha), Hurricane (359 kg/ha) and CIPAL 1621 (352 kg/ha). There was no statistically significant difference between those varieties (Figure 3).

Canola and Lupins Both canola and lupin failed to establish adequality and did not produce a harvestable yield. Both crops were sown much shallower than the other crops at the site due to their epigeal emergence. This requirement for shallow sowing

Page 2 is often a constraint on sandy soils in seasons with marginal soil moisture, as the seedbed can dry out very quickly resulting in poor emergence. Vetch gibberellic acid management trial. There were significant differences in dry matter production (p &lt; 0.001) between varieties with the highest yield of 1691 kg/ha for Volga and 1613 kg/ha for Studencia (Table 2). There were no effects of gibberellin treatments on plant density, plant height or dry matter (Table 3). This is despite early visual differences soon after gibberellic treatments were applied (Figure 4). Table 2. Effects of vetch variety on crop establishment, plant height and dry matter production. Measure

Figure 4. Seedlings that had been treated with 20 g/ha of ProGibb®SG which was applied as infurrow liquid stream at seeding (top) compared with untreated seedlings (bottom). Inoculation management trial There were highly significant effects of the treatments on number of nodules and on the total weight of nodules per plants. However, the treatments had little or no effect on shoot or root weight and this was reflected by there being no significant effect on grain yield. The absence of yield difference is likely due to the low yield and therefore nitrogen demand of the crop, with soil nitrogen supply enough to meet the requirements of the uninoculated plants. Uninoculated plants had very few nodules while the highest nodule numbers were in the Tag Team granular treatment, especially at the high rate (Figure 5). The seed applied peat slurry treatments had higher nodule numbers than the liquid application, but the difference was not statistically significant. Despite have fewer nodules than the granular treatments, slurry inoculation produced large sized nodules and therefore both the Nodulator peat and Tag Team granular products produced similar nodule weight per root mass (Figure 6).

Figure 6. Comparison of ratio of nodule weight to root weight. Hats with broken lines are standard errors averaged across treatments whereas solid lines were estimated from individual treatments

Implications for commercial practice The 2019 season was very challenging with the site receiving less than 100 mm growing season rainfall and frost impacting the site during the flowering and early grain fill period. The challenging seasonal conditions has limited yields achieved in the break crops for the second successive season.