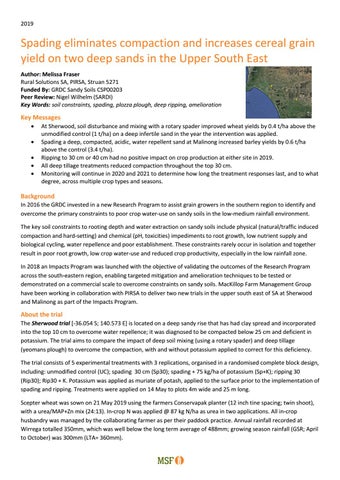 At Sherwood, soil disturbance and mixing with a rotary spader improved wheat yields by 0.4 t/ha above the unmodified control (1 t/ha) on a deep infertile sand in the year the intervention was applied. Spading a deep, compacted, acidic, water repellent sand at Malinong increased barley yields by 0.6 t/ha above the control (3.4 t/ha). Ripping to 30 cm or 40 cm had no positive impact on crop production at either site in 2019. All deep tillage treatments reduced compaction throughout the top 30 cm. Monitoring will continue in 2020 and 2021 to determine how long the treatment responses last, and to what degree, across multiple crop types and seasons.

Background In 2016 the GRDC invested in a new Research Program to assist grain growers in the southern region to identify and overcome the primary constraints to poor crop water-use on sandy soils in the low-medium rainfall environment. The key soil constraints to rooting depth and water extraction on sandy soils include physical (natural/traffic induced compaction and hard-setting) and chemical (pH, toxicities) impediments to root growth, low nutrient supply and biological cycling, water repellence and poor establishment. These constraints rarely occur in isolation and together result in poor root growth, low crop water-use and reduced crop productivity, especially in the low rainfall zone. In 2018 an Impacts Program was launched with the objective of validating the outcomes of the Research Program across the south-eastern region, enabling targeted mitigation and amelioration techniques to be tested or demonstrated on a commercial scale to overcome constraints on sandy soils. MacKillop Farm Management Group have been working in collaboration with PIRSA to deliver two new trials in the upper south east of SA at Sherwood and Malinong as part of the Impacts Program.

About the trial The Sherwood trial [-36.054 S; 140.573 E] is located on a deep sandy rise that has had clay spread and incorporated into the top 10 cm to overcome water repellence; it was diagnosed to be compacted below 25 cm and deficient in potassium. The trial aims to compare the impact of deep soil mixing (using a rotary spader) and deep tillage (yeomans plough) to overcome the compaction, with and without potassium applied to correct for this deficiency. The trial consists of 5 experimental treatments with 3 replications, organised in a randomised complete block design, including: unmodified control (UC); spading 30 cm (Sp30); spading + 75 kg/ha of potassium (Sp+K); ripping 30 (Rip30); Rip30 + K. Potassium was applied as muriate of potash, applied to the surface prior to the implementation of spading and ripping. Treatments were applied on 14 May to plots 4m wide and 25 m long. Scepter wheat was sown on 21 May 2019 using the farmers Conservapak planter (12 inch tine spacing; twin shoot), with a urea/MAP+Zn mix (24:13). In-crop N was applied @ 87 kg N/ha as urea in two applications. All in-crop husbandry was managed by the collaborating farmer as per their paddock practice. Annual rainfall recorded at Wirrega totalled 350mm, which was well below the long term average of 488mm; growing season rainfall (GSR; April to October) was 300mm (LTA= 360mm).

Page 2 At Malinong [-35.559 S; 139.482 E] a trial was established on a sandy crest that is severely water repellent in the surface, and acidic and compacted in the sub-surface. The trial compares the impact of deep soil tillage (ripping) to 30 cm and 40 cm; soil inversion (using a modified one way disc plough, commonly known as a Plozza Plough); and, soil mixing to 30 cm (using a rotary spader) to overcome constraints. The site had previously been pH mapped using a Veris ™ and variable rate lime applied to the whole paddock to treat sub-surface acidity. The trial consists of 5 treatments with three replications, organised in a randomised complete block design, including: unmodified control (UC); Rip30 and Rip40 using an ausplow deep ripper; Plozza plough (Pl Pl) and Sp30. Treatments were applied on 10 May 2019 to plots 18.3 m wide (configured to the farmer’s planter) x 200m long. Spartacus CL barley was sown @75 kg/ha by the farmer on 15 May 2019 with 100 kg/ha of zincstar/MOP (8:17.2:10:3.2:0.8). N was applied as urea @85 kg/ha at sowing and 95 kg/ha in-crop. Foliar Zn, Mn and Cu were also applied. In-crop herbicide and fungicide management was applied as per their standard commercial practice. Annual rainfall at Meningie totalled 398mm (LTA = 450mm), with GSR 352mm (LTA= 344mm). A digital cone penetrometer was used to measure soil penetration resistance in spring, when the soil was moist (field capacity at Malinong, but drying at Sherwood), to assess the effects of deep tillage on overcoming compaction, including on and off the rip line for the deep ripped plots at Malinong, Crop establishment was assessed, along with final wheat grain yield and quality for all treatments at Sherwood using a plot header to harvest 1.6 x 20 m of crop from each plot on 11 December. At Malinong, barley grain yield was measured using the farmer’s header to harvest 12 x 180 m from each plot on 26 November. Header bin weights were recorded per plot, which were crosschecked with a truck and weighbridge.

Results &amp; Discussion Soil compaction – soil is considered to be compacted when the penetration resistance (PR) exceeds 2500 kPa, with plant root growth severely reduced when the PR exceeds 3500. At Sherwood, PR increased steadily in the control below 15 cm, exceeding 2500 kPa beyond 25 cm (Figure 1a). Rip30 had reduced PR down the profile, particularly in the top 25 cm, and Sp30 consistently reduced the PR to below 1250 kPa to 30 cm. These measures will be repeated in 2020 given the drying soil conditions.

Figure 1. Impacts of various deep tillage on soil penetration resistance at Sherwood (a) and Malinong (b) in 2019.

Page 2 At Malinong, soil compaction is more severe, with PR exceeding 3500 kPa beyond 25 cm (Figure 1b). Nonetheless, similar responses were seen here with the PR reducing to less than 2500 kPa to 30 cm for the Sp, Pl Pl and Rip40 treatments (on the rip line). Between rip lines, reductions in compaction were not as effective when ripped to 40 cm (PR = 2820 kPa at 32 cm), and even less so when only ripped to 30 cm (data not shown). Crop performance – Wheat crop establishment varied at Sherwood in 2019 as a consequence of deep tillage, with all recording slightly lower plant numbers than the control (Figure 2a), owing to soft seedbed conditions that made it difficult to maintain optimum seed depth and placement. Some furrow infill was observed, particularly for the spaded treatments, which were quite patchy. Despite this early impact on establishment, spaded treatments returned the highest grain production, increasing yields to 1.4 t/ha, a 40 to 47% increase above the unmodified control (1 t/ha; Figure 2b). Ripping to 30 cm had no impact on grain yield, and there was no consistent benefit from application of potassium.

Figure 2. Impacts of deep tillage on wheat establishment (a) and grain yield (b) at Sherwood in 2019. Bars denote standard error of the mean.

At Malinong, crop establishment was improved by spading (Figure 3a), which is known to reduce repellency by diluting and mixing the repellent surface layer with damp subsoil. A thick, uniform and early germination of weeds was also observed in the spaded plots, allowing for prompt post-emergent treatment. Similarly, the modified one way plough reduces water repellence by burying the surface layer, along with weed seeds and stubble, essentially inverting the soil profile, bringing subsoil to the surface.

Figure 3. Impacts of deep tillage on barley establishment (a) and grain yield (b) at Malinong in 2019. Bars denote standard error of the mean.

Page 2 Where clay was present within 30 cm, the soil on the surface was relatively stable after the plozza plough and crop establishment was uniform. However, where the sandy A horizon extended beyond 30 cm, a very white bleached fragile sand was brought up that was prone to wind erosion. Seeding depth was difficult to control in this soft sand, hence germination was very patchy with large areas of bare ground across the crest of the dune; there were also signs of herbicide damage on some emerged seedlings. Establishment in the Plozza plough treatments dropped by 49 plants/m2 as a consequence. Rip40 was on par with the control at about 130 plants/m2 but Rip30 reduced establishment by 22 plants/m2 (Figure 3a). Seasonal conditions at Malinong were ideal for winter crop production, with 352 mm of growing season rain that fell mostly between late May and September (totalling 297 mm). Barley grain yield in the unmodified control was 3.4 t/ha as a result, more than double the long term district average for barley of 1.5 t/ha (Table 1). Table 1. Comparison of grain yields in the Malinong trial to district average for barley in Area SA2 (The Coorong) and potential yields. Treatment Unmodified control Plozza Plough Spading Long term district average* *from www.yieldgapaustralia.com.au

Grain yields were improved by 17% when the soil was spaded (to 4 t/ha; Figure 3b), achieving 74% of the water limited yield potential (Table 1). Two limitations to spading these soils, however, is the presence of rocks, which were encountered on the western end of the trial and that the cost of spading (approx. $150 - $180/ha) is often considered prohibitive by farmers. Disc ploughs and deep rippers are considered more durable and cheaper options when shallow rocks are present, though Pl Pl and Rip30 grain yields did not exceed control yields in 2019. The negative impacts associated with soil inversion that were observed in the first year are expected to dissipate in the second year, given the soil has had a chance to settle and stabilise. Yields reduced by 0.4 t/ha in the Rip40; greater soil moisture was observed in these treatments in spring as a result of reduced root exploration and crop water use. This data suggests that overcoming a physical constraint alone is not sufficient to improve yields at Malinong, but that the action of soil mixing/ inversion is necessary to treat water repellence and aid the incorporation of lime to treat acidity. Water repellence and profile pH will be measured prior to sowing in 2020 to assess the effectiveness of each deep tillage type in treating these constraints.

These trials confirm that cereal grain yields can be improved on deep sandy soils when their constraints are treated. Soil mixing, inversion and deep ripping all treated subsoil compaction, but crop responses were improved in 2019 when multiple constraints were addressed via spading. Crop monitoring will continue in 2020 and 2021 at both sites, allowing assessment of the treatment responses across multiple crop types and seasons. This is vital to provide economic data to support decision making. Every sand will have a different combination of constraints; knowing what these are is crucial to selecting the best deep tillage type and which complementary fertilisers and soil conditioners are required.

Acknowledgements The research reported here is made possible by the significant contributions of growers through both trial cooperation and the support of the GRDC. We’d like to thank the Eckert and Jaeschke families for their continued support, along with Matt Howell (Platinum Ag, Meningie), and Adam Hancock (Elders, Naracoorte), for their assistance in delivering these trials. This work is funded under the GRDC project “Increasing production on Sandy Soils in low and medium rainfall areas of the Southern region” (CSP00203); a collaboration between the CSIRO, the University of South Australia, the SA state government through Primary Industries and Regions SA, Mallee Sustainable Farming Inc., and Trengove Consulting. Contact: Melissa.fraser@sa.gov.au Mob: 0427 084 569