Cereal Responses to Ripping, Seeding and Nutrition Across the SA Mallee in 2019 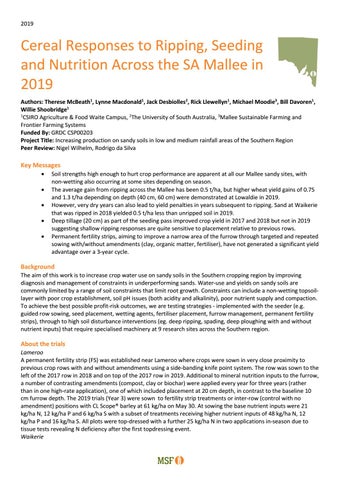 Soil strengths high enough to hurt crop performance are apparent at all our Mallee sandy sites, with non-wetting also occurring at some sites depending on season. The average gain from ripping across the Mallee has been 0.5 t/ha, but higher wheat yield gains of 0.75 and 1.3 t/ha depending on depth (40 cm, 60 cm) were demonstrated at Lowaldie in 2019. However, very dry years can also lead to yield penalties in years subsequent to ripping. Sand at Waikerie that was ripped in 2018 yielded 0.5 t/ha less than unripped soil in 2019. Deep tillage (20 cm) as part of the seeding pass improved crop yield in 2017 and 2018 but not in 2019 suggesting shallow ripping responses are quite sensitive to placement relative to previous rows. Permanent fertility strips, aiming to improve a narrow area of the furrow through targeted and repeated sowing with/without amendments (clay, organic matter, fertiliser), have not generated a significant yield advantage over a 3-year cycle.

Background The aim of this work is to increase crop water use on sandy soils in the Southern cropping region by improving diagnosis and management of constraints in underperforming sands. Water-use and yields on sandy soils are commonly limited by a range of soil constraints that limit root growth. Constraints can include a non-wetting topsoillayer with poor crop establishment, soil pH issues (both acidity and alkalinity), poor nutrient supply and compaction. To achieve the best possible profit-risk outcomes, we are testing strategies - implemented with the seeder (e.g. guided row sowing, seed placement, wetting agents, fertiliser placement, furrow management, permanent fertility strips), through to high soil disturbance interventions (eg. deep ripping, spading, deep ploughing with and without nutrient inputs) that require specialised machinery at 9 research sites across the Southern region.

About the trials Lameroo A permanent fertility strip (FS) was established near Lameroo where crops were sown in very close proximity to previous crop rows with and without amendments using a side-banding knife point system. The row was sown to the left of the 2017 row in 2018 and on top of the 2017 row in 2019. Additional to mineral nutrition inputs to the furrow, a number of contrasting amendments (compost, clay or biochar) were applied every year for three years (rather than in one high-rate application), one of which included placement at 20 cm depth, in contrast to the baseline 10 cm furrow depth. The 2019 trials (Year 3) were sown to fertility strip treatments or inter-row (control with no amendment) positions with CL Scope® barley at 61 kg/ha on May 30. At sowing the base nutrient inputs were 21 kg/ha N, 12 kg/ha P and 6 kg/ha S with a subset of treatments receiving higher nutrient inputs of 48 kg/ha N, 12 kg/ha P and 16 kg/ha S. All plots were top-dressed with a further 25 kg/ha N in two applications in-season due to tissue tests revealing N deficiency after the first topdressing event. Waikerie

Page 5 A range of more intensive interventions were implemented at Waikerie in 2018 to evaluate the value of increasing the depth of physical treatments (ripping) and/or amendments (chicken litter @ 2.5 t/ha or nutrient inputs from fertiliser to match chicken litter) (Table 1). The shallow fertiliser treatment was banded at 8 cm depth prior to sowing while chicken litter was spread on the soil surface. In 2019 we measured the residual (1 year old) responses to these treatments. Adjacent to the intensive treatments was a trial testing nutrient packages applied with the seeder including combinations of N (20 kg/ha) and P (10 kg/ha) supplied on the surface, 3, 6 or 10 cm deep. The trials were sown with Spartacus® CL barley on May 22 with 20 kg N/ha and 15 kg P/ha as urea and MAP. Lowaldie A small trial was established at Lowaldie in 2019 testing the response to nil, 40 cm or 60 cm ripping depth. The plots were ripped on May 1 under dry conditions with only 6-10 mm of plant available water in the top 100 cm. The plots were sown with Scepter wheat on May 30. Table 1. Summary of SA Mallee site treatments indicating the type of physical amelioration approach, amendments used, and placement strategy. Treatment Amendment Site (Yr est) Amendment Type (depth cm) Placement At furrow depth Lameroo (2017) Seeder (10 vs. 20) Compost (up to 200 kg/ha), clay (up to 200 kg/ha), biochar (up to 60 kg/ha) annual Waikerie (2018)

Results &amp; Discussion All sites experienced below average growing season rainfall in 2019 with 184 mm at Lowaldie (average 237 mm) and 205 mm at Lameroo (average 270 mm), but despite average conditions in May and June Waikerie experienced the worst season with 119 mm (average 164 mm). This followed a very dry fallow period for all sites. Lameroo Barley was sown into 89-93 mm of stored water on the sandy soil types, but more than half of this water was stored in the 60-100 cm layer. Independent of treatment there was 39-41 kg/ha of soil mineral N at sowing in the sands. Table 2. Barley responses to inter-row and edge-row (fertility strip) sowing positions with base and high levels of sowing nutrient inputs along with a range of amendments at Lameroo in 2019. Clay is 100 kg/ha as Ca bentonite, compost is 100 kg/ha TailorMadeTM Prills, biochar is 60 kg/ha Cool Terra. Within a column different letters represent a significantly different treatment at p=0.05. Treatment

There was a 7 mm 0-40cm depth soil water advantage for crops sown edge-row (fertility strip) compared with the inter-row position. However, this year, no fertiliser was applied with the seed, with all deep banded at full furrow depth (avoiding the possible toxicity that was experienced in 2018). The FS treatments in this Year 3 were edge-row sown into the Year 2 stubble rows (rather than the old Year 1 stubble rows, as initially planned), in order to access

Page 5 the furrow moisture benefits measured at sowing. While all treatments achieved in excess of 100 plants/m2, the barley crop establishment under inter-row sowing achieved an extra 18 plants/m2, significantly higher than their equivalent edge-row sowing FS treatments. This is explained by the likely impact of significant residue clumping that occurred in most edge-row sown plots, from the uprooting of the Year 1 stubble rows when edge row sowing into the adjacent Year 2 stubble rows. The Lameroo site was depleted for soil N after two cereal crops in the seasons prior and both GS31 biomass and tissue tests (not shown) during tillering indicated N deficiency. The response to high nutrient input observed for inter-row treatments at first node was not significant at grain yield, which was in part due to dry conditions late in the season and high levels of variation in yield across all plots (Table 2). In contrast to these results a small sub-trial on the lower yielding South facing slope showed a large establishment delay for inter-row sown plots at 21 days after sowing relative to on-row sown plots (40 vs. 120 + plants/m2) which translated to an early (GS31) biomass effect (0.3-0.4 t/ha inter-row vs 0.63-0.71 t/ha edge-row). These effects carried through to harvest and resulted in a 0.3 t/ha yield advantage of on-row sowing (1.5 edge-row vs. 1.2 t/ha inter-row) in the sub-trial. Some buffer strips also indicated a potential response to deep-till (200 mm) with edgerow sowing that was not detected in the main trial despite this treatment showing significant yield advantage in the previous two years. Waikerie The Waikerie site has high soil strength at 15-55 cm depth and based on soil test results is potentially deficient for P, Zn and Mn. At the time of sowing there was 65-83 mm of water (but more than half of this was below 60 cm depth), and strong carryover of N from the dry season of 2018 with 100-159 kg /ha mineral N. The fertiliser experiment lacked consistent trends. The lowest yielding treatments in this season of high N carryover were where fertiliser N was closest to the seedling early in the season while the highest yielding treatment was where fertiliser N was at 10 cm depth with significant separation from the seed. Table 3. Barley responses to fertiliser treatments at Waikerie. Treatments with a different letter are significantly different from each other (P=0.05) for yield. Treatment GS31 biomass (t/ha) Grain Yield (t/ha) Nil 0.91 0.91bc MAP broadcast

In the ripping experiment, no treatment performed better than the control in 2019 which had no disturbance and was fertilised with 20 kg/ha N and 10 kg/ha P. While the 30 cm deep ripping treatments did not cause a barley yield penalty, the 60 cm deep treatments caused a 0.5 t/ha yield penalty (averaging 0.2 t/ha compared with the control of 0.7 t/ha) (Figure 1). This result is in contrast with 2018, the year when the plots were ripped and the 60 cm rip treatment offered a 0.3 t/ha yield advantage over the control. The experiment will continue for a further 3 years to evaluate the longevity of physical and nutrient carry-over effects.

Figure 1. 2018 Wheat and 2019 Barley yields (t/ha) at Waikerie in response to treatments implemented in 2018; ripping (Rip30, Rip60) with and without 2.5 t/ha chicken litter (CL) or matched nutrients from fertiliser (fert) applied at the surface (surf) or deep. Error bars represent least significant difference (P=0.05, LSD 0.23 t/ha in both years).

Implications for commercial practice The fertility strip treatments implemented at Lameroo showed benefits of edge-row sowing plus deep tillage in yr 1 and yr 2 but not in yr 3 when the row position returned to that of yr 1. The addition of amendments with the fertility strip treatments did not generate consistent yield benefits. Experiments with fertiliser packages at Waikerie have not revealed new options over two very dry seasons. Year 1 benefits from deep ripping have been measured at Waikerie (2018) and Lowaldie (2019). However, 60 cm rip treatments at Waikerie have revealed a significant risk in the year after ripping with a 0.5 t/ha yield penalty in the very dry season of 2019.

Acknowledgements The research undertaken as part of this project is made possible by the significant contributions of growers through both trial cooperation (Pocock, Schmidt and Loller families) and the support of the GRDC. The broader Sandy Soils

Cereal Responses to Ripping, Seeding and Nutrition Across the SA Mallee in 2019