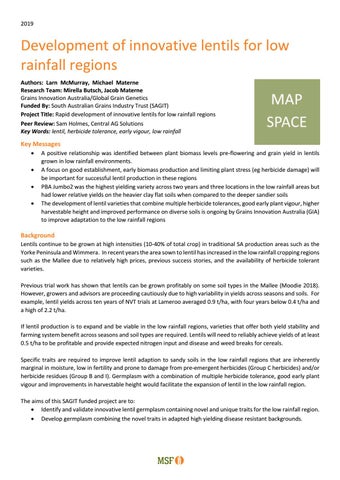 A positive relationship was identified between plant biomass levels pre-flowering and grain yield in lentils grown in low rainfall environments. A focus on good establishment, early biomass production and limiting plant stress (eg herbicide damage) will be important for successful lentil production in these regions PBA Jumbo2 was the highest yielding variety across two years and three locations in the low rainfall areas but had lower relative yields on the heavier clay flat soils when compared to the deeper sandier soils The development of lentil varieties that combine multiple herbicide tolerances, good early plant vigour, higher harvestable height and improved performance on diverse soils is ongoing by Grains Innovation Australia (GIA) to improve adaptation to the low rainfall regions

Background Lentils continue to be grown at high intensities (10-40% of total crop) in traditional SA production areas such as the Yorke Peninsula and Wimmera. In recent years the area sown to lentil has increased in the low rainfall cropping regions such as the Mallee due to relatively high prices, previous success stories, and the availability of herbicide tolerant varieties. Previous trial work has shown that lentils can be grown profitably on some soil types in the Mallee (Moodie 2018). However, growers and advisors are proceeding cautiously due to high variability in yields across seasons and soils. For example, lentil yields across ten years of NVT trials at Lameroo averaged 0.9 t/ha, with four years below 0.4 t/ha and a high of 2.2 t/ha. If lentil production is to expand and be viable in the low rainfall regions, varieties that offer both yield stability and farming system benefit across seasons and soil types are required. Lentils will need to reliably achieve yields of at least 0.5 t/ha to be profitable and provide expected nitrogen input and disease and weed breaks for cereals. Specific traits are required to improve lentil adaption to sandy soils in the low rainfall regions that are inherently marginal in moisture, low in fertility and prone to damage from pre-emergent herbicides (Group C herbicides) and/or herbicide residues (Group B and I). Germplasm with a combination of multiple herbicide tolerance, good early plant vigour and improvements in harvestable height would facilitate the expansion of lentil in the low rainfall region. The aims of this SAGIT funded project are to: • Identify and validate innovative lentil germplasm containing novel and unique traits for the low rainfall region. • Develop germplasm combining the novel traits in adapted high yielding disease resistant backgrounds.

About the trials Current lentil varieties and breeding lines that contain novel herbicide tolerance and plant morphological traits were evaluated on different soil types and localities in the low rainfall region of South East Australia in 2018 and 2019. Trials were sown at Alford (sand hill), Pinnaroo (clay flat) and Hopetoun (rising sandy loam) into retained cereal stubbles using a plot seeder with narrow tynes on 25 or 28 cm row spacing (Table 1). All trials were managed as for conventional lentil production (i.e. as for PBA Jumbo2 or PBA Bolt) using the best management practice for each area. Twelve varieties and GIA breeding lines were evaluated in 2018, and 18 in 2019. The commercial varieties were PBA Jumbo2, PBA Bolt, PBA Hurricane and PBA Hallmark. GIA lines incorporated novel traits and combinations of traits, such as herbicide tolerance (Group B, C and I – residue clopyralid), early vigour, high biomass production and improved harvest height (Table 2). Measurements at all sites included plant establishment, early vigour, NDVI, phenological development (flowering and maturity), harvestability and grain yield. Plant biomass was measured at 8-10 weeks after sowing and at the onset of flowering. Table 1. Site details of low rainfall lentil validation trials 2018 and 2019

Results &amp; Discussion Growing season rainfall was slightly higher in 2019 than in 2018 and ranged from 18 to 43% below the long-term average at all sites except for Hopetoun 2019 (Table 1). This provided ideal climatic conditions for evaluating lentils in low rainfall regions. Despite having the lowest growing season rainfall total of the three sites in 2019, Hopetoun received 209 mm of 2018/19 summer rainfall compared with approximately 50 mm at Pinnaroo and Alford (Table 1). Lentil site mean grain yields in 2019 were low, and similar to those of 2018 at Pinnaroo (0.7 t/ha) and Alford (1.0 t/ha) (Table 1). However, at Hopetoun, average site grain yields were 1.8 t/ha and more than three times that of those achieved in 2018, highlighting the value of effective summer rainfall to lentil production in these environments. Factors affecting lentil yields across the sites included post flowering moisture stress at all sites, poor establishment and Group C herbicide damage on the sand hill at Alford in both years, reproductive frosts at Pinnaroo in 2018 and transient waterlogging and premature hay-off on the duplex soil at Hopetoun, 2019. The range in yield limiting factors across the sites highlights the numerous challenges facing lentil producers in low rainfall environments. The broadly adapted disease resistant conventional lentil variety, PBA Jumbo2 was the highest yielding variety across all sites in 2018 and 2019 (Table 2). It was approximately 10-15% higher yielding than PBA Hallmark XT, PBA Hurricane XT and PBA Bolt which generally all yielded similarly (Table 2). However, PBA Jumbo2 appears less suited to the heavier textured Mallee clay flats than the deeper sandier soils, as evidenced by average and poor relative grain yields on these soil types at Pinnaroo in 2018 and 2019 respectively. PBA Bolt was the highest yielding variety at Pinnaroo in 2019 but suffered from relative higher levels of frost damage at this site in 2018. The GIA advanced breeding line GIA1802L (Group B herbicide tolerant Bolt type) was similar yielding to PBA Jumbo2 across all sites in 2019 (14% higher yielding than PBA Hurricane XT) with high yields at all sites, but it was similar to Bolt and lower yielding than PBA Jumbo2 in 2018. The advanced GIA breeding line, GIA1701L (Group B herbicide

Page 2 tolerant Jumbo2 type) was similar yielding to PBA Hurricane and PBA Hallmark XT, with good yields on the sandy soil at Alford in both years. However, like PBA Jumbo2, it was lower yielding at Pinnaroo. GIA1701L is being released in 2020, but GIA1802L has a poor disease profile and is unlikely to be released. In 2019, lines with Group I residue tolerance were 7-20% lower yielding than PBA Hurricane XT across all sites, with best yields at Alford. Lines with improved Group C tolerance performed similarly across sites and ranged from 38% lower (post-emergent metribuzin tolerance) to 5% higher (improved Group C pre-emergent tolerance) yielding than PBA Hurricane XT. Lines with high vigour and plant biomass ranged from 55% lower to 5% higher than PBA Hurricane XT, due largely to an extreme range in flowering and maturity within this group. Some of these results and the agronomic characteristic measurements (data not presented) show the potential value of these traits to low rainfall lentil production. However, further breeding is required to pyramid the beneficial traits into better adapted genetic backgrounds. Table 2. Grain yields (t/ha) of selected lentil lines from novel trait validation trials at three low rainfall sites, 2018 &amp; 2019

In both years plant biomass (dry weight), either 10 weeks after sowing or at flowering, was poorly correlated with grain yield when comparing all lines (data not presented). A number of breeding lines with high levels of early vigour and/or plant biomass had low grain yields due to extremely early flowering that limited biomass production and

Page 2 increased frost damage. When these lines were excluded, stronger correlations existed between these variables, particularly biomass at flowering (Table 3).

Implications for commercial practice A positive link between plant biomass and grain yield in the low rainfall environments is significant for both lentil producers and breeding programs. Production can be maximised by focusing on good crop establishment and growth and minimising stresses that reduce total biomass (eg herbicide damage). Breeding must focus on increasing vigour and plant growth, but also on expanding herbicide tolerance to minimise crop damage that is currently an unwanted side effect of controlling weeds in low rainfall environments. PBA Jumbo 2 consistently produces high levels of plant biomass compared to other cultivars and this may explain its broad adaptation and high relative yields. The exception being on the heavier textured Mallee clay flats. Table 3. Summary of grain and dry matter yield of the highest yielding lentils lines from three low rainfall sites in 2018 &amp; 2019

A number of GIA breeding lines with higher plant biomass than PBA Hurricane XT and importantly, similar yields to other commercial varieties, were identified in 2018 and 2019. These early vigour characteristics are an important trait for enabling effective lentil establishment and early plant development in low rainfall environments, particularly those prone to sand blasting. However, it must come with improved tolerance to Group C in-crop herbicides and Group B and I residues. Additionally, increases in plant height and lodging resistance cannot come at the expense of existing plant pod retention levels, as was observed in PBA Hallmark XT at several sites in 2019. The rapid introgression by GIA of Group C, B and I-residue herbicide tolerance, high early vigour and increased plant height into a high yielding disease resistant background aims to release a lentil variety with improved adaptation to the low rainfall regions.