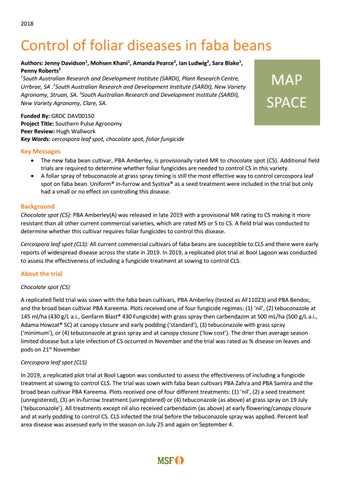 The new faba bean cultivar, PBA Amberley, is provisionally rated MR to chocolate spot (CS). Additional field trials are required to determine whether foliar fungicides are needed to control CS in this variety. A foliar spray of tebuconazole at grass spray timing is still the most effective way to control cercospora leaf spot on faba bean. Uniform® in-furrow and Systiva® as a seed treatment were included in the trial but only had a small or no effect on controlling this disease.

Background Chocolate spot (CS): PBA Amberley(A) was released in late 2019 with a provisional MR rating to CS making it more resistant than all other current commercial varieties, which are rated MS or S to CS. A field trial was conducted to determine whether this cultivar requires foliar fungicides to control this disease. Cercospora leaf spot (CLS): All current commercial cultivars of faba beans are susceptible to CLS and there were early reports of widespread disease across the state in 2019. In 2019, a replicated plot trial at Bool Lagoon was conducted to assess the effectiveness of including a fungicide treatment at sowing to control CLS.

About the trial Chocolate spot (CS) A replicated field trial was sown with the faba bean cultivars, PBA Amberley (tested as AF11023) and PBA Bendoc, and the broad bean cultivar PBA Kareema. Plots received one of four fungicide regimes: (1) ‘nil’, (2) tebuconazole at 145 ml/ha (430 g/L a.i., Genfarm Blast® 430 Fungicide) with grass spray then carbendazim at 500 mL/ha (500 g/L a.i., Adama Howzat® SC) at canopy closure and early podding (‘standard’), (3) tebuconazole with grass spray (‘minimum’), or (4) tebuconazole at grass spray and at canopy closure (‘low cost’). The drier than average season limited disease but a late infection of CS occurred in November and the trial was rated as % disease on leaves and pods on 21st November Cercospora leaf spot (CLS) In 2019, a replicated plot trial at Bool Lagoon was conducted to assess the effectiveness of including a fungicide treatment at sowing to control CLS. The trial was sown with faba bean cultivars PBA Zahra and PBA Samira and the broad bean cultivar PBA Kareema. Plots received one of four different treatments: (1) ‘nil’, (2) a seed treatment (unregistered), (3) an in-furrow treatment (unregistered) or (4) tebuconazole (as above) at grass spray on 19 July (‘tebuconazole’). All treatments except nil also received carbendazim (as above) at early flowering/canopy closure and at early podding to control CS. CLS infected the trial before the tebuconazole spray was applied. Percent leaf area disease was assessed early in the season on July 25 and again on September 4.

Results &amp; Discussion Chocolate spot (CS) PBA Amberley(A) had significantly less disease on pods and leaves, compared to PBA Bendoc(A) and PBA Kareema(A) (Table 1a). This infection occurred 8 weeks after the last foliar fungicide spray and so the treatments were ineffective except for slightly less disease on pods in the standard treatment compared to untreated plots (Table 1b). Yield was not influenced by the treatments since the disease occurred so late in the season. Table 1a. Chocolate spot assessed as per cent area diseased per plot on pods and leaves in each cultivar of faba and broad bean at Bool Lagoon in 2019. Different letters represent significant difference between varieties. Cultivar % area diseased

Cercospora leaf spot (CLS) Assessments on July 25 found PBA Zahra had significantly more disease compared to PBA Samira and PBA Kareema although no differences between cultivars were observed in the later assessment (Table 2a). Disease assessment on September 4 found the tebuconazole application significantly reduced the spread of CLS, superior to all other treatments. The fungicide treatments did not influence yield in this trial. Table 2. Cercospora leaf spot assessed as percentage leaf area diseased per plot in each cultivar of faba and broad bean at Bool Lagoon in 2019 rated on 25 July and 4 September. Different letters represent significant differences between varieties. Cultivar % leaf area diseased

Implications for commercial practice Due to the drier than average season, the severity of CS was limited in this trial. Hence it is still unclear if PBA Amberley requires foliar fungicides for control of this disease, and the trial will need to be repeated. CS is favoured by mild temperatures (15-25°C) and high humidity (&gt;70%) extending over 4-5 days during flowering and after canopy closure. Areas that receive good rain through August and early spring are at higher risk of CS developing and spreading. This includes the South East of SA and Lower Eyre Peninsula regions. Growers are encouraged to be proactive in controlling CS by applying pre-emptive fungicide sprays at early-mid flowering before symptoms appear. Follow up sprays may be required in high rainfall regions and high biomass crops (especially where there was high seeding and/or early sowing) as humidity is retained in the canopy providing an ideal environment for CS to proliferate. Areas around trees and under power lines can become hot spots for the disease if spray planes are unable to reach those areas of the crop. Thick canopies from early sowing or high seeding rates can produce warm humid conditions under the canopy which is ideal for disease development and spread. CS can be easily distinguished from other faba bean leaf diseases as it also infects flowers. The CLS trial found that a tebuconazole foliar application timed from 4 weeks after sowing or mixed with the grass spray provides long term control. The limited disease spread resulting from the drier than average season most likely caused the lack of response in yield. CLS appears early in the season on the bottom leaves as the pathogen survives on faba bean debris and in soil. The spores are spread through wind and rain splash to plants and the disease moves further up the plant through the season, which can cause extensive defoliation if not well controlled. Short rotation intervals between faba bean crops leads to increased disease carryover and higher infection levels. Paddocks regularly cropped to faba beans benefit from an early fungicide spray (eg., tebuconazole) to prevent infection and spread of CLS. Where CLS has already infected crops, later sprays of carbendazim for chocolate spot will also restrict further spread of CLS. A helpful guide for growers and agronomists to identify common faba bean diseases can be found here: http://communities.grdc.com.au/field-crop-diseases/spot-the-difference-identifying-faba-bean-diseases/. Correct identification is important as different fungicides are used to manage different fungal disease.

References Include references and links to supporting documents and resources.