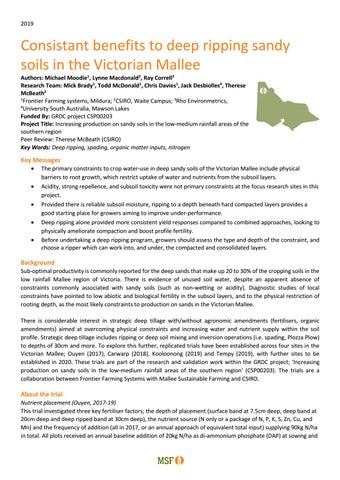 The primary constraints to crop water-use in deep sandy soils of the Victorian Mallee include physical barriers to root growth, which restrict uptake of water and nutrients from the subsoil layers. Acidity, strong repellence, and subsoil toxicity were not primary constraints at the focus research sites in this project. Provided there is reliable subsoil moisture, ripping to a depth beneath hard compacted layers provides a good starting place for growers aiming to improve under-performance. Deep ripping alone provided more consistent yield responses compared to combined approaches, looking to physically ameliorate compaction and boost profile fertility. Before undertaking a deep ripping program, growers should assess the type and depth of the constraint, and choose a ripper which can work into, and under, the compacted and consolidated layers.

Background Sub-optimal productivity is commonly reported for the deep sands that make up 20 to 30% of the cropping soils in the low rainfall Mallee region of Victoria. There is evidence of unused soil water, despite an apparent absence of constraints commonly associated with sandy soils (such as non-wetting or acidity). Diagnostic studies of local constraints have pointed to low abiotic and biological fertility in the subsoil layers, and to the physical restriction of rooting depth, as the most likely constraints to production on sands in the Victorian Mallee. There is considerable interest in strategic deep tillage with/without agronomic amendments (fertilisers, organic amendments) aimed at overcoming physical constraints and increasing water and nutrient supply within the soil profile. Strategic deep tillage includes ripping or deep soil mixing and inversion operations (i.e. spading, Plozza Plow) to depths of 30cm and more. To explore this further, replicated trials have been established across four sites in the Victorian Mallee; Ouyen (2017), Carwarp (2018), Kooloonong (2019) and Tempy (2019), with further sites to be established in 2020. These trials are part of the research and validation work within the GRDC project; ‘Increasing production on sandy soils in the low-medium rainfall areas of the southern region’ (CSP00203). The trials are a collaboration between Frontier Farming Systems with Mallee Sustainable Farming and CSIRO.

About the trial Nutrient placement (Ouyen, 2017-19) This trial investigated three key fertiliser factors; the depth of placement (surface band at 7.5cm deep, deep band at 20cm deep and deep ripped band at 30cm deep), the nutrient source (N only or a package of N, P, K, S, Zn, Cu, and Mn) and the frequency of addition (all in 2017, or an annual approach of equivalent total input) supplying 90kg N/ha in total. All plots received an annual baseline addition of 20kg N/ha as di-ammonium phosphate (DAP) at sowing and

Page 2 top-dressed application of ammonium sulphate during tillering. The trial was sown to Spartacus barley in 2017, Kord Wheat in 2018 and Spartacus barley in 2019. Organic matter placement (Carwarp, 2018-2019) This trial compared the impact of physical intervention alone (deep ripping, spading or a combination of the two), to physical intervention combined with incorporation into the surface soil or deep placement of lucerne hay at 6t/ha (Table 1). For incorporation, lucerne hay was spread on the soil surface before spading with Farmax spader supplied by Groocock Soil Improvement (http://www.spaders.com.au/). For deep subsoil placement, the same lucerne material was pelletised and metered at a controlled rate behind the rip tine at depth. Deep ripping operations at 30 or 60cm depth were completed with a Tilco® ridged shank at 56cm spacing. The trial was sown to Spartacus barley in the fist season (2018) followed by Razor Wheat in the second year (2019). Table 1. Treatments included in the organic matter (OM) placement trial at Carwarp, established 2018. Treatment

Despite below average rainfall throughout the first three years of the project, positive yield benefits have been observed following deep ripping across all four trial sites in the first season. At the Ouyen trial (2017, year 1) deep ripping at ~30cm provided a yield benefit of 0.8t/ha over the control and the pre-drilled fertiliser treatments (Figure 1). This result reflected a reduction in penetration resistance measured under the deep ripped treatments (Figure 2). Pre-drilling fertiliser at 20cm depth did not reduce the sands penetration resistance, as the narrow tine and knifepoint used had a slotting effect and did not disrupt soil strength, unlike the deep ripping implement (Agroplow deep ripping shank with a wide foot). Following the single ripping event at Ouyen in 2017, significant yield benefits were observed for two subsequent seasons, but not in the third season, providing a cumulative benefit of 1.5t/ha (Figure 1). Where ripping was repeatedly applied on an annual basis, positive yield responses were observed in all three seasons (Figure 1), with cumulative benefit over the control of 2t/ha. In the first year of the Carwarp trial, mechanical disturbance to 30cm by rotary spading or deep ripping resulted in additional grain yield of 0.5t/ha compared to the unmodified control yield of 0.55t/ha (Figure 3). Deeper ripping to 60cm did not provide a significant yield increase over working to a depth of 30cm only. These responses were observed under very dry conditions, with only 75mm of rainfall post sowing. Another drought was encountered in 2019 with similar low rainfall during the growing season and very little rainfall over the summer fallow. Consequently, a negative yield effect of 0.5-0.6t/ha was observed in treatments where deep ripping was conducted to 60cm in the previous season. The mechanism of this result is not clear and is still being explored.

Figure 1. Grain yield (t/ha) response at Ouyen to pre-drilling or deep ripping implemented prior to sowing in (once) or in each season (annual). Only the control treatments are presented which all had equivalent rates and placement of nutrient.

Figure 2. Penetration resistance (kPa) measured at the Ouyen site in 2017 for the control, pre-drill and deep rip treatments.

Figure 3. Grain yield (t/ha) response at the Carwarp site to deep ripping and spading treatments without organic matter (OM) addition over two seasons (2018 and 2019). In 2019, new sites were established at Kooloonong (Figure 4) and Tempy (Figure 5) demonstrating yield gains across several crop types. Comparing grain legumes at Kooloonong, deep ripping significantly increased the yield of lupin, lentil and chickpea by 0.4, 0.4 and 1.0 t/ha respectively. At Tempy, deep ripping provided a 0.7t/ha increase in barley yield over the control, however adding inclusion plates did not provide any advantage over deep ripping with a ridged shank tine.

While deep has provided clear benefits across these four trial sites, the addition of inputs such as OM or additional fertiliser did not show consistent and/or economic benefits under dry trial conditions. Improving inputs over and above good agronomic practice through subsoil placement (30cm or deeper) of nitrogen or a broader nutrient package (P, K, S, Zn, Mn, Cu) did not provide a yield benefit at Ouyen. A sister trial at Ouyen looking at the incorporation of organic inputs with rotary spading showed a positive response to the addition of chicken litter and compost (Moodie et al. 2019). However, this effect was unable to be replicated with similar organic inputs at the Tempy and Kooloonong sites in 2019. Lucerne hay was used as an organic source at Carwarp with no positive yield impacts observed across the first two, albeit very dry, years of the trial.

Figure 4. Grain yield of lupin, lentil and chickpea at Kooloonong in 2019 in response to deep ripping and organic matter (OM) addition. Error bars are standard error of mean (SEM).

Figure 5. Grain yield of barley in response to treatments implemented at Tempy in 2019. Error bars are standard error of mean (SEM).

Implications for commercial practice The primary constraints to crop water-use in deep sandy soils of the Victorian Mallee appear to include physical barriers to root growth, which restrict uptake of water and nutrients from the subsoil layers. Acidity, strong repellence, and subsoil toxicity were not primary constraints at the focus research sites in this project. Provided there is reliable subsoil moisture, ripping to a depth beneath hard compacted layers provides a good starting place for growers aiming to improve under-performance. Deep ripping alone provided more consistent yield responses compared to combined approaches, looking to physically ameliorate compaction and boost profile fertility through incorporation of high N organic amendments, although the seasons were drier than average when nutrient responses are expected to be minimal. Before undertaking a deep ripping program, growers should assess the type and depth of the constraint, and choose a ripper which can work into,

Page 6 and under, the compacted and consolidated layers. In some cases deeper ripping operations requiring greater draught are more costly than shallower tillage and do not necessarily lead to higher yield benefits.

Acknowledgements This research is a collaborative project between the GRDC, CSIRO, the University of South Australia, the SA state government through Primary Industries and Regions SA, Mallee Sustainable Farming Inc, AgGrow Agronomy and Trengove Consulting. The research undertaken as part of this project is made possible by the significant contributions of growers through both trial cooperation and the support of the GRDC, the author would like to thank them for their continued support.