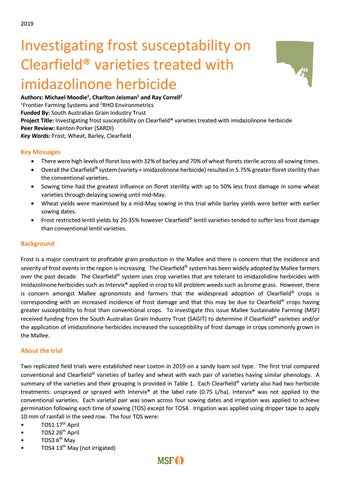 There were high levels of floret loss with 32% of barley and 70% of wheat florets sterile across all sowing times. Overall the Clearfieldâ system (variety + imidazolinone herbicide) resulted in 5.75% greater floret sterility than the conventional varieties. Sowing time had the greatest influence on floret sterility with up to 50% less frost damage in some wheat varieties through delaying sowing until mid-May. Wheat yields were maximised by a mid-May sowing in this trial while barley yields were better with earlier sowing dates. Frost restricted lentil yields by 20-35% however ClearfieldÒ lentil varieties tended to suffer less frost damage than conventional lentil varieties.

Background Frost is a major constraint to profitable grain production in the Mallee and there is concern that the incidence and severity of frost events in the region is increasing. The ClearfieldÒ system has been widely adopted by Mallee farmers over the past decade. The ClearfieldÒ system uses crop varieties that are tolerant to imidazolidine herbicides with imidazolinone herbicides such as Intervix® applied in crop to kill problem weeds such as brome grass. However, there is concern amongst Mallee agronomists and farmers that the widespread adoption of ClearfieldÒ crops is corresponding with an increased incidence of frost damage and that this may be due to ClearfieldÒ crops having greater susceptibility to frost than conventional crops. To investigate this issue Mallee Sustainable Farming (MSF) received funding from the South Australian Grain Industry Trust (SAGIT) to determine if ClearfieldÒ varieties and/or the application of imidazolinone herbicides increased the susceptibility of frost damage in crops commonly grown in the Mallee.

About the trial Two replicated field trials were established near Loxton in 2019 on a sandy loam soil type. The first trial compared conventional and ClearfieldÒ varieties of barley and wheat with each pair of varieties having similar phenology. A summary of the varieties and their grouping is provided in Table 1. Each ClearfieldÒ variety also had two herbicide treatments: unsprayed or sprayed with Intervix® at the label rate (0.75 L/ha). Intervix® was not applied to the conventional varieties. Each varietal pair was sown across four sowing dates and irrigation was applied to achieve germination following each time of sowing (TOS) except for TOS4. Irrigation was applied using dripper tape to apply 10 mm of rainfall in the seed row. The four TOS were: • TOS1 17th April • TOS2 26th April • TOS3 6th May • TOS4 13th May (not irrigated)

Table 1. Varieties used in the cereal trial classified by conventional or ClearfieldÒ

Each ClearfieldÒ variety also had two herbicide treatments: unsprayed or sprayed with Intervix® at the label rate (0.75 L/ha). Intervix® was not applied to the conventional varieties. Floret sterility was measured for each treatment by taking two 0.25 m x 4 interior row cuts from each plot during dough formation (Zadoks 81-87). Thirty spikelets were then collected by randomly selecting stems from the upturned combined sample. Floret sterility was then calculated as fraction of number of grains set and the total number of florets per spikelet. Harvest Index (HI) was also calculated by taking a 1.12m2 (4 internal rows x 1m) quadrat cut at crop maturity and calculating HI as the percentage of grain from the total biomass (grain + stubble). Grain yield was then measured after removing the outside rows so that grain yield was measured only from the four internal plot rows to avoid edge effects. Growth stage monitoring using the Zadoks growth scale was also completed regularly during late winter and early spring to determine the sensitive flowering. A second trial compared conventional and ClearfieldÒ varieties of lentils using a similar methodology as described for the cereal (barley and wheat) trial. The lentil varietal pairs are shown in Table 2. Spinnaker® (100 g/ha) was used for the imidazolinone herbicide treatment as Intervix® was not registered for lentils. Sowing times for the lentil trial corresponded with the cereal trial sowing times. The percentage of frosted pods was determined by collecting 12 plants from each plot during the late pod filling stage by placing a piece of dowel across each plot at three locations and removing the plants at the intersection between the four internal rows and the dowel. All pods were then removed from each of the 12 plants to determine the total number of pods and then pods were inspected to determine the number with visual symptoms of frost damage. The ratio of frosted pods to total pod number was the calculated. Dry matter was measured by taking a quadrat cut (6 rows x 1 m) at the end of pod fill. Grain yield was measured by machine harvesting all six plot rows. For both trials temperatures sensors were installed at canopy height to determine the incidence and severity of frost at the site (Figure 1). There was a very high incidence of frost with 26 separate frost events where minimum temperatures reach below 0oC from August – October and many of these events had a minimum temperature below -4oC. Table 2. Varieties used in the cereal trial classified by conventional or ClearfieldÒ

Results &amp; Discussion Cereal Trial There were very high levels of floret sterility with 31% of barley florets and 70% of wheat florets sterile. Overall, there was more damage in the ClearfieldÒ varieties than the corresponding conventional varieties (Figure 1). However, the difference varied between the pairs, with less (but not significant) damage in Spartacus CL than in La Trobe but more damage in Hatchel CL than Axe, and more in Razor CL than in Mace. There was only one significant effect of applying ClearfieldÒ herbicide (Intervix®) with an increase of 6.1% floret sterility in Spartacus Barley. When the ClearfieldÒ system was considered (ClearfieldÒ variety + spray), overall, there was 5.75 % more damage in the ClearfieldÒ plots than in the conventionally planted plots. Time of sowing had a much greater effect on floret sterility particularly for the wheat Gladius-Kord and Hatchet-Ace pairs (Figure 1). The wheat Mace-Razor pair showed only a small decrease in damage with TOS. There was much less damage in the barley pairs and the trends were not consistent.

Figure 1. Percentage of sterile florets for each varietal pair comparing conventional and ClearfieldÒ varieties with and without Intervix® herbicide applied (top) and time of sowing (bottom).

The loss of florets had a quantitative negative effect on crop yield and for every one percent loss in florets there was a loss of 7 kg/ha of grain yield. Sowing time had the greatest influence on grain yield of all varieties (Figure 2). The highest grain yields in the Buloke-Scope barley pair came from early sowing with a negative impact from delaying sowing. The highest yields came from the La Trobe-Spartacus pair with yield maximised by TOS2 and TOS3. However, wheat yields were maximised by delaying sowing to TOS4 (13th May) and sowing too early was particularly detrimental in the Gladius-Kord and Hatchet-Axe varietal combinations.

Page 4 The effect of the Intervix® application (which includes the effect of varieties within pair) overall was significant (Figure 2). There was no significant effect on barley, but the herbicide application had a detrimental effect on wheat with an overall yield loss of 130 kg/ha. However, the ClearfieldÒ varieties yielded better than their conventional pairs which cancelled out the detrimental effect of the herbicide so that the ClearfieldÒ variety with Intervix® applied gave comparable yields to the conventional variety.

Figure 2. Grain yield for each varietal pair comparing conventional and ClearfieldÒ varieties with and without Intervix® herbicide applied (top) and time of sowing (bottom).

Figure 3. Effect of conventional and ClearfieldÒ varieties with and without Spinnaker® herbicide on grain yield, biomass, harvest index and the percentage of frosted pods of lentils

Implications for commercial practice The outcomes from the 2019 trials again found instances where the varieties used in the ClearfieldÒ system were more affected by frost than the corresponding conventional varieties. However, these effects were not always consistent across varieties and in particular crops with ClearfieldÒ varieties of barley and lentils sometimes having less damage than the corresponding conventional options. A consistent outcome from the first two seasons of this project (2018-2019) have been that ClearfieldÒ varieties sown before the start of May have suffered the highest levels of frost damage which in turn negatively impacted grain yield. ClearfieldÒ barley options have been better suited to early sowing with Scope CL yields maximised when sown in mid-April and Spartacus CL yields maximised when sown from Anzac Day onwards.