Break crop selection in the Mallee 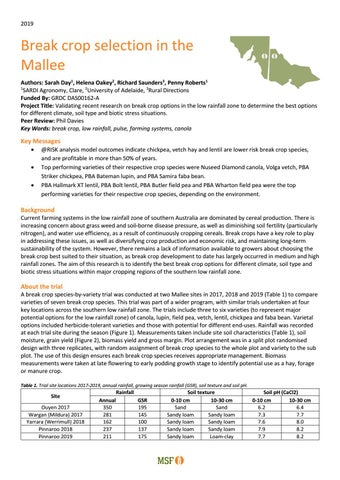 Current farming systems in the low rainfall zone of southern Australia are dominated by cereal production. There is increasing concern about grass weed and soil-borne disease pressure, as well as diminishing soil fertility (particularly nitrogen), and water use efficiency, as a result of continuously cropping cereals. Break crops have a key role to play in addressing these issues, as well as diversifying crop production and economic risk, and maintaining long-term sustainability of the system. However, there remains a lack of information available to growers about choosing the break crop best suited to their situation, as break crop development to date has largely occurred in medium and high rainfall zones. The aim of this research is to identify the best break crop options for different climate, soil type and biotic stress situations within major cropping regions of the southern low rainfall zone.

A break crop species-by-variety trial was conducted at two Mallee sites in 2017, 2018 and 2019 (Table 1) to compare varieties of seven break crop species. This trial was part of a wider program, with similar trials undertaken at four key locations across the southern low rainfall zone. The trials include three to six varieties (to represent major potential options for the low rainfall zone) of canola, lupin, field pea, vetch, lentil, chickpea and faba bean. Varietal options included herbicide-tolerant varieties and those with potential for different end-uses. Rainfall was recorded at each trial site during the season (Figure 1). Measurements taken include site soil characteristics (Table 1), soil moisture, grain yield (Figure 2), biomass yield and gross margin. Plot arrangement was in a split plot randomised design with three replicates, with random assignment of break crop species to the whole plot and variety to the sub plot. The use of this design ensures each break crop species receives appropriate management. Biomass measurements were taken at late flowering to early podding growth stage to identify potential use as a hay, forage or manure crop. Table 1. Trial site locations 2017-2019, annual rainfall, growing season rainfall (GSR), soil texture and soil pH.

GRAIN YIELD Early maturing hybrid canola variety Nuseed Diamond has had higher grain yield than other canola varieties in all low rainfall environments across the wider program, and is well suited to low rainfall environments. It has also consistently produced more biomass than other canola varieties (data not shown). Chickpea variety performance was similar in most seasons, although PBA Striker was 44% and 60% higher yielding than PBA Monarch and Genesis090, respectively, at Pinnaroo, 2019 (Figure 2). Faba bean were the highest yielding break crop species at Pinnaroo, 2018, as they are least sensitive to frost during reproductive growth stages, and a number of spring frost events occurred in this environment. PBA Samira and PBA Marne had similar grain yield performance in the Mallee (Figure 2), while PBA Bendoc was lower yielding at most sites. Field pea were one of the higher yielding break crop species across Mallee environments, except where spring frosts occurred during reproductive growth stages. Semileafless field pea varieties PBA Butler and PBA Wharton were higher yielding than other field pea varieties in 2017 and 2019 Mallee environments. PBA Bolt and PBA Hallmark XT lentil have performed well across all low rainfall

environments for both biomass and grain production. PBA Bolt offers early to mid-flowering and maturity, lodging resistance, improved boron and salt tolerance, and high grain yield potential in drought years and low rainfall environments. PBA Hallmark XT offers improved herbicide tolerance to conventional varieties, and was higher yielding than PBA Hurricane XT in four out of five Mallee environments (Figure 2). In the Mallee, PBA Bateman and Mandelup lupin varieties had similar grain yield, while in the wider program PBA Bateman was often higher yielding than Mandelup. Grain yield of PBA Jurien has been lower than PBA Bateman across the wider program, and at least 5% lower yielding than PBA Bateman in the Mallee (Figure 2). In some seasons vetch variety performance was similar, while in others the early maturing variety Volga had higher biomass and grain production than Rasina and Timok.

Figure 2. Grain yield of break crop varieties at five Mallee field trial sites, 2017-2019. Varieties of the same crop species are grouped together along the x-axis. Standard error is 0.04-0.08.

@RISK ANALYSIS The @RISK analysis of 5000 seasonal outcomes provided a percentage of years that each break crop would be profitable, and the net profit for each rotation sequence (Table 3). Average net profit per hectare, per year, over a three-year rotation for chickpea and lentil were $181.86 and $72.71 respectively, compared to $4.40 for field pea. On average, over all seasons, rotations with faba bean and canola produced losses of $10.32 and $44.19 per hectare, respectively. Rotation sequences including field pea were profitable in 40.7% of years, and those including lentil were profitable in 51.6% of years. Sequences that included chickpea were profitable in 55.5% of years. It is important to keep in mind that this analysis was based on a low input system with the application of only one fungicide spray, and chickpea would not be as profitable in a season with high disease risk or infection of ascochyta blight. The analysis indicated that canola and faba bean were the least profitable, and were relatively high risk break crop options — and were only profitable in 34.3% and 38.7% of years, respectively. Table 3. @RISK analysis of break crop options in a three-year rotation with wheat. The rotation sequence is ranked from lowest risk and most profitable, to highest risk and least profitable. Net profit = gross margin minus estimated fixed costs ($100/ha).

Implications for commercial practice The decision to grow a break crop is generally done with a whole systems approach, as break crops can be utilised to address the issues and constraints that arise from continuously cropping cereals. The choice of break crop is made depending on the reason for growing a break crop, crop end-use, financial risk, paddock selection and soil type. Field pea production is more stable than other break crop species across the low rainfall environment. However, field pea is a risky option for grain production where spring frost events occur frequently. Field pea has multiple alternative end-uses to grain, and with high biomass potential can be utilised as a hay, forage, silage or manure crop when frost or drought affected, to salvage a financial return. Vetch is also a versatile crop, having multiple potential end-uses, and is a good fit in a mixed farming system. Lupin is suited to sandy or acidic soils and has potential to be utilised as a green-brown manure crop. Canola, lentil and faba bean can provide herbicide tolerant crop options where in-crop weeds or herbicide residues are an issue. Canola also has a good fit where cereal root diseases are limiting production (Kirkegaard, Christen, Krupinsky, &amp; Layzell, 2008). However, canola requires adequate soil moisture at sowing for successful germination, particularly on heavier soil types, and may be an opportunistic crop in some environments. Lentil is more sensitive to soil constraints than other break crop species and plant height is often low, leading to poor harvestability. Faba bean would be suitable where a break crop is needed in a frost prone area, as faba bean tolerate reproductive frost events better than other pulse crop species, providing there is an early break to the season. Chickpea has shown stability in the upper Victorian Mallee. However, it is important to consider the ability to manage disease. Each break crop species has its own unique fit in the farming system, and all available agronomic, local and paddock information needs to be taken into consideration when selecting a break crop to fit into each individual farming system. Each break crop species has several varieties, with a range of agronomic characteristics to select from, that are suitable for production in the low rainfall zone. Although top performing varieties have been identified for some break crop species, the final selection will depend on the individual farming system — particularly where soil type, herbicide residues and/or broadleaf weeds are a constraint to production.

The research undertaken as part of this project is made possible by the significant contributions of growers through both trial cooperation and the support of the GRDC (DAS00162A), and the authors would like to thank them for their continued support. The continued assistance in trial management from SARDI Agronomy groups at Clare and Minnipa, Frontier Farming Systems and land owners is gratefully acknowledged and appreciated.

Break crop selection in the Mallee