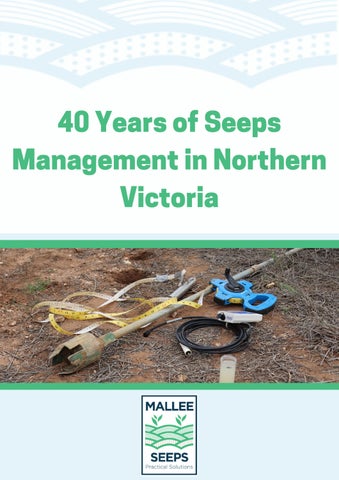 About the Author Rob comes from Swan Hill in Victoria and has more than 40 years experience working in agricultural industries in the region. He was a founding member of Birchip Cropping Group and the Mallee Sustainable Farming Project. Rob was a Soil Conservation officer from 1974 in Charlton Puckapunyal, Ouyen and Swan Hill. He became an agronomist at Swan Hill in 1992 and with the Agricultural Department for over 3 decades has grown to understand and assist in the remedy of issues confronting Mallee communities and farmers.

During his career, Rob focused on projects which resulted in direct benefits for grain growers. He was a member of the southern panel of the Grains Research and Development Committee (GRDC) and his knowledge and skills developed across a range of areas including extension, farm business management, enterprise planning, research and agricultural economics were applied. “Farming systems and soils are my real bent, but economics too - I’m interested in making sure things are profitable. As they say, you have to be in the black to be green. So I’m very interested in the whole farming system,” says Rob, who was also both Editor, and a regular contributor for 20 years to The Mallee Farmer Newsletter.

What is a Mallee Seep?

06 Results of many many years of monitoring.... “NutShell” learnings Dune seepage salinity - a historical perspective Implications for present day

Introduction What is a Mallee Seep?

A dune seep is an area of saturated soil caused by seepage from sand dunes in Mallee dune-swale landscapes. Researchers have found saturated layers at depth (up to 10 metres deep) below sand dunes by drilling at numerous locations in the Mallee, a result that was unexpected in a low rainfall farming district. Two factors cause a dune seep: Sand dune soils with unused water that drains down through the soil profile, and A ‘perched watertable’ where water accumulates below ground level upon a clay layer with very low permeability. Seeps form in lower-lying areas where this clay occurs at shallow depth and perched water is forced to the land surface (Figure 1). This is often in low-lying swales adjacent to sand dunes, but dune seeps can also occur on slopes. In the Murray Mallee, a geological deposit known as ‘Blanchetown Clay’ forms the low permeability layer. Similar materials of similar age occur throughout agricultural South Australia and the Victorian Mallee 1

Results of many many years of monitoring.... “NutShell” learnings

1. Knowing watertable salinity levels is critical before accurate recommendations of correct restorative plant species can be provided. 2. Tree species and pastures have been assessed for their maximum tolerance of watertable salinity levels - from which they will both utilise and flourish long-term. (refer to Fact Sheet showing how these species tolerate differing levels of watertable salinity) 3. Tree spacing should be no closer than a 20m grid (understorey species are not generally recommended). 4 .Salt-tolerant species, when correctly selected, will use seepage water and lead to a dramatic fall in watertable levels. 5. Protective fencing around these areas has a design life of up to 10 years. 6. Tall wheat grass will often perish or not persist if heavily slashed, but can withstand being accidentally burnt. 7. No observed change in dune seepage affected area has occurred in over 40 years where a two year rotation is still being practised ( i.e. no-till is not present).

As early as the 1940’s dryland salinity was being reported in Victoria. A report by J N Rowan, Soil Conservation Authority (SCA) “Salinity On Dryland Farms in North Western Victoria” was published in 1971. The data was mostly interpreted from 1963 aerial photos, identifying 105,000ha of saline discharge. Of this, 90,000ha was natural discharge present at settlement; 12,000ha was due to rises in regional watertables and 2,000ha of dune seepage having developed since the clearing of native vegetation. A further 1,000ha of seepage salinity had developed below the Stock and Domestic earthen channel system that operated in the Victorian Mallee for almost 100 years until the 1990’s when it was progressively piped. The 2000ha of seepage salting below the base and / or mid-slope of dunes consisted of more than 900 saltpans of an average area of approximately 2ha.

In the mid 1970’s the SCA’s research (based in Kew, Melbourne) and extension staff (Swan Hill) carried out extensive trials to establish the most salt tolerant species of grasses and legumes suitable for the Central Mallee area. Puccinellia and Tall Wheat grass excelled and became the species of recommendation and of choice. In 1976 SCA Officer Rob Sonogan in partnership with the State Rivers and Water Supply Commission (Kerang) began an extended number of trials of salt tolerant tree species across the Mallee often in association with seeping water supply channels. These trials identified both species and spacing and today provide living examples of success or otherwise of salt tolerant trees and their impact upon seepage induced salinity sites. Concurrently a number of these and other dune seepage sites had a series of observation bores (piezometers) installed from 4 to 6 metres in depth. These sites today can provide a wealth of information about both the outcome of the treatments applied and of the observed changes over this 40 year period.

Implications for present day Whilst dune seepage salting was well recognised by the late 60’s; it’s development seemed to tie in with above normal rainfall events. Large events led to wetter seepage areas; and in drier years they seemed to be stable and sometimes even disappeared. However, where affected areas reached the stage of highly saline soil surfaces, these rarely recovered without intervention. In the 70’s to the early 90’s many landholder grants were given to fence out and to begin revegetating with either trees, saline grass species, old man salt-bush and/or combinations of these. Success or failure of this approach is now evident and the majority of successes are still evident. However, in more recent years over the past decade, many new locations of dune seepage have appeared. In some instances these have been sparked into existence by extreme high rainfall events (e.g. 200mm plus over 2010/11 summer). In others it has been an insidious appearance and continual advancement into previously good cropping land. Current thinking is that these new areas are the result of current farming practices, rainfall amounts and its seasonal distribution. Almost perfect weed control of summer weeds with the new intensive ‘no-til’ approach has almost stopped their deep usage of soil moisture and this, coupled with more summer rainfall in relation to growing season rainfall, has a double edged sword effect. Although total rainfall has significantly decreased over the past 20 years, the slightly greater rainfall over summer allows more to “fill up the deep soil bucket” and less growing season rainfall minimises the process of salt being leached back deeper into the soil profile.

Historical case study sites The case studies are based on three seeps remediation sites established at Manangatang, Waitchie and Curyo in the late 1970s to mid 1980s.

GIS information has given a good spatial understanding of the surrounding area of all sites data was collected from. All the data produced is easily created from free information available online, For example: Google Earth Pro Vicmap Elevation data set. https://www.land.vic.gov.au/maps-and-spatial/spatial-data/vicmapcatalogue/vicmap-elevation Google Earth is a great starting point and highlights the sites management clearly showing the tree lines or other vegetation established within or around the sites investigated.

The site was established in 1985. The original aim of the landholder was to halt expansion of the seep area and to re-establish ground cover. Knowledge gained from trials over the previous 10 years allowed the selection of suitable species and spacings of trees and salt tolerant grasses. The site was a lake of water in winter and completely bare and saline during summer. Cropping was still being attempted over the entire area. Later years confirmed that the site’s elevation is closely associated with the Victorian, Mallee-wide regional groundwater table, which has extremely high salinities and therefore these are difficult sites to remediate.

Picture 3 (b) - Elevation mAHD: showing highest point in proximity to the site and the lowest point within the site Source:Vic-map Elevation DEM 2

Pictures of established trees surrounding the site and broad acre cropping adjacent to the site.

Looking along the edge of the saltpan. Inland Red Gums planted on the upper side and dead Swamp Yates downslope into the pan area.

Watertable salinities MUST be known BEFORE making any vegetative reclamation decisions! This site was a combination of both dune seepage and a regional groundwater outcrop. Only one row of the carefully selected tree species at 20 metre spacing is required to intercept seepage at a site like this. Trees must be located above obvious bare salt affected soils. It is critical to exclude livestock and vermin until establishment is secured. It is very important to know the elevation AHD (Australian Height Datum or height above sea level) of the highly saline regional groundwater and if this is affecting the site (this can be estimated from nearby areas where regional groundwater is discharging at the ground surface).

The site was established in 1978. The site had an old catchment dam surrounded by very saline and bare soils. Very little was known about reclamation of such areas and the research into salt tolerant trees and pastures was in its infancy. A range of tree species were planted in a row very close to the edge of the pan and Tall Wheat Grass sown in the centre. Watertable salinity Initial salinity level (EC) of the watertable was unknown; the importance of knowing watertable salinity had not been demonstrated by the late 70s. Many years later it was determined to be approximately 50,000 EC. Recent sampling indicated a watertable salinity of 58,500 EC at a depth of 1 metre below the surface.

Picture 3 b) Elevation mAHD: showing highest point in proximity to the site and the lowest point within the site

Aerial view of the Watichie site

Must know the watertable salinity before considering a reclamation strategy. Extremely high watertable salinities usually indicate a close proximity to the highly saline regional groundwater. This site was identified as dune seepage adding into a regional discharge area. Trees and other vegetation must be established into watertable salinities that they can tolerate. Old man saltbush can be problematic with rabbit management.

The site was established in 1979. The seepage area was saturated, bare and expanding into valuable cropping land downslope. It is clearly a dune seepage site but with high watertable salinities. The landholder wanted to stabilise the area and use it for lambing down into. Old Man Saltbush was established because the watertable salinity was measured to be 29,000EC which is considered too high for other salt tolerant pastures. A row of salt tolerant trees was also planted upslope near the roadside.

Picture 3 b) Elevation mAHD: showing highest point in proximity to the site and the lowest point within the site

Picture 4 .) Pictures of established trees surrounding the site and broad acre cropping adjacent to the site. Birds eye view of the site with salt bush established

Old man saltbush can successfully establish into watertable salinities of up to 30,000EC. Rows of saltbush should be at least 20 metres apart – this allows for future inter-row pasture utilisation as watertables fall and soil surface salinities decrease. Protective fencing is critical and both rabbits and foxes can be problematic. Grazing management of Old Man Saltbush (to ensure persistence) requires specialised skills.