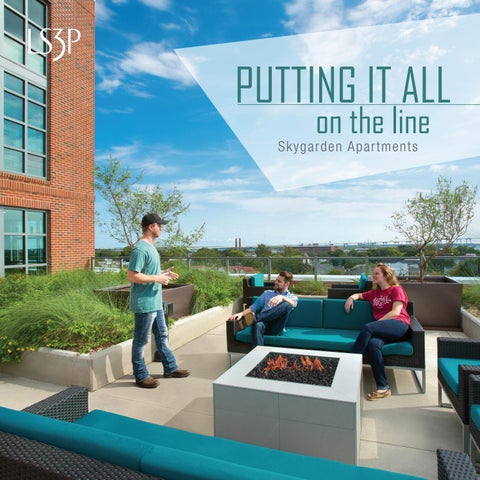 PUTTING IT ALL on the line

Designing buildings for the present tense is a substantial task. Designing buildings which also honor a rich, storied past adds another element of complexity. Designing a building which accommodates the present, the past, and an evolving civic future? That challenge can bring exciting opportunities which elevate a design to the next level. Every layer of complexity creates opportunities for architectural delight.

A ramshackle ice house sat on an underutilized site, not far from the thriving King Street shopping district on Charlestonâ&#x20AC;&#x2122;s historic peninsula. The 100+ year old building was an eyesore and was quite literally falling down; during construction the street faĂ§ade ultimately toppled over before it could be salvaged. The site, however, had untapped potential, not only due to its proximity to the College of Charleston and a number of local amenities, but also because it aligned with an exciting civic project in the early stages of development: The Lowcountry Lowline.

The Lowline, envisioned as a 1.7 mile linear city park, will reclaim an abandoned railbed for use as a bike and pedestrian connector and public green space. Inspired by New Yorkâ&#x20AC;&#x2122;s High Line, the project will create myriad opportunities for enriching the public realm, potentially creating a new jewel for the city. With plans for development in the early stages, however, designing an adjacent project with future opportunities in mind required a great deal of collaboration and flexibility to lay the groundwork for as-yet-unforeseen possibilities.

The site, fortuitously, also aligned with another pressing need on the Charleston peninsula: more housing for College of Charleston students. LS3P worked closely with an initial developer who purchased the property with an eye toward creating a conceptual multifamily condominium design. In the process, LS3P helped the client navigate the stringent Board of Architectural Review (BAR) and rezoning process. With this foundational work successfully completed, the developer sold the more valuable parcel and the concept design to a student housing developer. The new owner hired LS3P to complete the project on time and budget.

The new design retained the character and essence that the city already supported in the initial concept, but grew the program into a 190,000 SF apartment building with 94 units. At 10 stories, this building is one of the tallest structures in the Midtown district; however, careful attention to form and detailing maintained a pedestrianfriendly neighborhood scale appropriate to its historic context. The form creates the impression of an assemblage of buildings rather than a monolithic complex, with the original lower story of the ice house preserved to encompass street-level retail, parking, and the pool deck with a lighter, more delicate residential element set back from the street and rising above. A modern glass and metal panel linear bar building angles to align with the future Lowline to create a slightly futuristic element, and therefore blending old Charleston ideas with contemporary materials and detailing. Though the palette of this modern wing feels of-the-moment, the ground floor visually connects the Lowline with buidling lobby and amenity spaces located to embrace the future pedestrian nature of the park.

The expansive modern wing feels larger than it is due to the abundant natural light and connection to the outdoors. This element houses a spacious lobby which signals to residents (and their parents) that this is not a traditional utilitarian college dorm. Amenities include framed skyline views from public spaces, indoor parking, game rooms, lounge rooms with kitchens, conference rooms, study rooms, a fullsized gym, bike storage, a rooftop pool, and an outdoor rooftop garden with fire pit overlooking the city. The original inspiration for the interior design was the siteâ&#x20AC;&#x2122;s history as an ice

house. A palette of cool, icy blues, turquoise, and white served as a jumping-off point which informed the materials palette throughout. The design needed to be economical, durable, easy-to-maintain, and both student- and pet-friendly; the client also wanted a high level of finish. The team blended an industrial aesthetic with luxe finishes such as a backlit faux onyx backdrop for the concierge desk, and concrete columns wrapped in etched glass to juxtapose a sense of refinement with an urban edge. Warm wood ceiling clouds and oversized decorative light fixtures highlight the tall lobby ceilings.

The student apartments reflect the same sleek, contemporary aesthetic as the public spaces, with large expansive windows, bright interiors, and exposed concrete ceilings. Most units are four-bedroom, with private bedrooms and private bathrooms. One coveted two-bedroom unit, tucked away in the first-floor lobby wing, overlooks the future Lowline. The third floor serves as a hub for gathering and relaxing. With large windows, a full kitchen, pool table, and modern gas fireplace, the space offers panoramic city views. The adjacent pool deck creates its own urban oasis with a vegetated rooftop garden overlooking Woolfe Street. When it opened, Skygarden was an instant success for the clients, the students, the city, and the firm. The development opened with a waiting list, and the students are thrilled with their apartments and the Skygarden lifestyle. In addition to being a vast improvement over the existing dilapidated ice house, the project has also created a vibrant development which elevated its site and provides an economic boost to the neighborhood. The futureoriented design holds space on its site for a perfect Lowline gateway which celebrates compression and expansion moving through

the modern alleyway. Though the site was one of only two privately held parcels along the 1.7 mile Lowline route, the city entrusted LS3P to preserve this space for public use and lay the groundwork for an evolving future. In the process, LS3P built and strengthened relationships with the client, the City, and our internal teams, adding real value for all entities involved. The resulting design now serves as an anchor and a foundation for the exciting possibilities that lie ahead, in the process achieving the complex task of honoring a rich past, a thriving present, and an evolving future. Putting it All on the Line: Skygarden Apartments

Putting it All on the Line: Skygarden Apartments