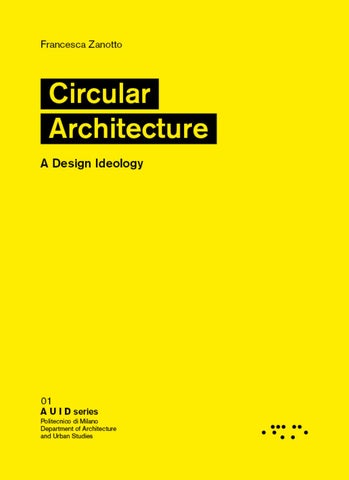 AUID series These agile booklets document the research carried out within our doctoral program. We decided not to publish the entire doctoral works, which are extensive and articulated, but to, instead, select and extract, from those scientific concentrates of sophisticated knowledge, the most comprehensible studies that are obviously associated with themes of the current debate on architectural design. These texts have, therefore, been forcibly stripped of their premises, of the state of the art and apparatus overview. They have, at times, even been disconnected from the broader rationale they belonged to. Hence, it is an arbitrary and, sometimes, unjust process, if we consider the scientific coherence of the original constructs. However, dear reader, we assure you that it was done with the best of intentions, an effort aimed at building a small, solid and well-designed bridge between the elite world of academic research and the fluid, open and permeable to discussion, updates of the critical evolution of contemporary architectural design. Alessandro Rocca

We pretend that architecture raises biopolitical awareness, that it is a technical apparatus adapted to the ecological challenge, a non-naive relationship with nature. Circularity has always been evident and substantial in the absolute discipline of architecture, a field where ideas, both right and wrong ones, circulate for millennia, superimposing epochs, technologies, cultures, and mastering various needs and wishes. Architecture is always partially alienated from its own time, maintaining a critical distance from the present, strong relations with the past, often also with the forgotten past, and an inevitable, intrinsic drive towards the future. Then, architecture is timeless, less by ambition than by necessity, projected with its millennial knowledge into the contingency of a collapsing Anthropocene, struggling with an environment that, as Timothy Morton wrote, â&#x20AC;&#x153;is more or less a way of considering groups and humans â&#x20AC;&#x201C; surrounded by nature, or in continuity with other beings such as animals and plants. It is about being-withâ&#x20AC;?. This being-with is, therefore, the challenge. Perhaps we can believe that the answer, the solution, is circular architecture, though we are inclined to think that, in any closed circuit, the point of interest and of crisis is the flaw, the defective seal, the break that transforms the circularity of virtue, or of neurosis, into a creative energy that produces changes, invents new ideas of comfort and beauty, and pushes the ancient art of architecture into the threatening and cloudy history of the near future.

on the one hand we see the rise of socially oriented design, where the virtue is to do ‘more with less’ [...] while on the other hand design stubbornly continues to focus on value-free innovation, on inventing expensive useless gadgets justified solely by the pretence that this production helps the design industry to survive2.

We cannot reflect on architecture today without taking into account the relationship between design and consumption. In the exceptionally complex framework in which contemporary architectural debate takes place, comprising environmental conditions of Anthropocene, digitalisation of services, pervasiveness of information and economic recession, consumption styles have profoundly changed, expanding in new fields, following new markets and new options. Contemporary consumption patterns are definitely ambiguous. The end of the 20th century and the beginning of 21st marked the period most concerned about the environment, where sustainable development has become an obsession and green the favourite shade. It seemed to be the beginning of a linear path. Then, a few years later, most influential countries in the world chose denier leaders, and the relentless technological innovation has driven individuals to increase consumption to avoid getting stuck in the past. According to Pier Vittorio Aureli, there is something «schizophrenic» in the «neoliberal forms of governance pairing cuts to welfare and social protection with measures to stimulate individual consumption»1. The world of design is on the same, paradoxical line:

Individuals, either conscious or unconscious consumers in each stage of their existence, have discovered that, in the global market, they are customers before being citizens, targeted from their first years and induced to consume by the global capitalistic machine. However, consumption is inherent in human nature, the basis for metabolism and survival, and primary source of pleasure and fulfilment since the first moments of life. Architecture has a close relationship with all the dynamics affecting consumption: dealing with changing patterns means observing a moment of profound modification of the values and purposes that underpin life on Earth. The direct result of consumption is waste, an architectural concern as material, spatial, environmental and cultural issue. Waste is an indicator of our time and the symptom of the deep dichotomy characterising contemporary consumption: the abundance of waste of resources and awareness of their scarcity, of which waste is both consequence and antithesis. Counterpart to any productive and decisional process, waste is a basic, unavoidable part of the metabolism of reality, ÂŤwhat is considered useless [...] after a choice, on the basis of a parameter employed to ratify what is useful and what is notÂť3. When a process defines a choice, a positive, there is a tangible or intangible corresponding negative left aside: matter, objects, spaces, opportunities. Waste is unwanted matter and bad use, carrying along, inherent in its own nature, its being an alternative to the positive.

waste, garbage, trash, refuse, rubbish, junk, litter, dirt, filth for the by-products of consumption or production that have no value and are, therefore, disposed of [...]: waste refers to any rejected material (solid or liquid) or residue of human activity in manufacturing, institution, business, or household; the totality of human discards. Garbage refers to solid material that includes wet discards (mainly household waste, but also all municipal solid waste). Trash refers to any dry discards. Refuse and rubbish are inclusive terms for all rejected, unwanted matter. Junk is any worn, poor quality, or discarded article. Litter is trash or garbage out of place. Dirt and filth refer to a foul and putrid substance6.

The physical dimension of waste, intended as waste of things and resources, has a strong potential of interference with the human environment: it requires constant attention and efforts to be managed and contained, since it challenges the liveability of living spaces. Physical waste exists in many forms, and it undergoes different phases and statuses: private, public, small, big. According to Lynch, it is «matter out of place, particularly matter that is unpleasant, dangerous and difficult to remove. “Unpleasant”, “dangerous” and “out of place” are culturally defined, and relative to situation»4. The qualitative perception of waste changes according to its context and its age: when it is «old and scarce enough»5 to be an antique it is likable and valued, as rotting organic matter is more repellent than old, dried flowers. This vast semantic field and the ambiguity of matter are partially managed by several different terms, each one trying to define waste in a specific condition of time, place, nature and quantity: 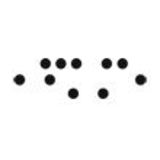 Circular economy opens a new domain for architectural design, where architecture is focused on its production and disposal cycles, and the p...

Circular economy opens a new domain for architectural design, where architecture is focused on its production and disposal cycles, and the p...