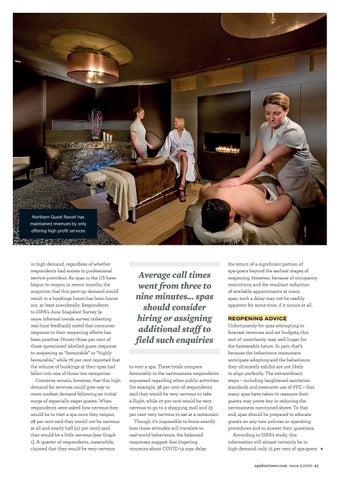 in high demand, regardless of whether respondents had access to professional service providers. As spas in the US have begun to reopen in recent months, the suspicion that this pent-up demand would result in a bookings boom has been borne out, at least anecdotally. Respondents to ISPA’s June Snapshot Survey (a more informal trends survey collecting real-time feedback) noted that consumer response to their reopening efforts has been positive. Ninety-three per cent of those questioned labelled guest response to reopening as “favourable” or “highly favourable,” while 76 per cent reported that the volume of bookings at their spas had fallen into one of those two categories. Concerns remain, however, that this high demand for services could give way to more modest demand following an initial surge of especially eager guests. When respondents were asked how nervous they would be to visit a spa once they reopen, 28 per cent said they would not be nervous at all and nearly half (47 per cent) said they would be a little nervous (see Graph 1). A quarter of respondents, meanwhile, claimed that they would be very nervous

Average call times went from three to nine minutes... spas should consider hiring or assigning additional staff to field such enquiries to visit a spa. These totals compare favourably to the nervousness respondents expressed regarding other public activities. For example, 38 per cent of respondents said they would be very nervous to take a flight, while 27 per cent would be very nervous to go to a shopping mall and 23 per cent very nervous to eat at a restaurant. Though it’s impossible to know exactly how those attitudes will translate to real-world behaviours, the balanced responses suggest that lingering concerns about COVID-19 may delay

the return of a significant portion of spa-goers beyond the earliest stages of reopening. However, because of occupancy restrictions and the resultant reduction of available appointments at many spas, such a delay may not be readily apparent for some time, if it occurs at all.

REOPENING ADVICE Unfortunately for spas attempting to forecast revenues and set budgets, this sort of uncertainty may well linger for the foreseeable future. In part, that’s because the behaviours consumers anticipate adopting and the behaviours they ultimately exhibit are not likely to align perfectly. The extraordinary steps – including heightened sanitation standards and extensive use of PPE – that many spas have taken to reassure their guests may prove key in reducing the nervousness mentioned above. To that end, spas should be prepared to educate guests on any new policies or operating procedures and to answer their questions. According to ISPA’s study, this information will almost certainly be in high demand: only 15 per cent of spa-goers spabusiness.com issue 3 2020 41