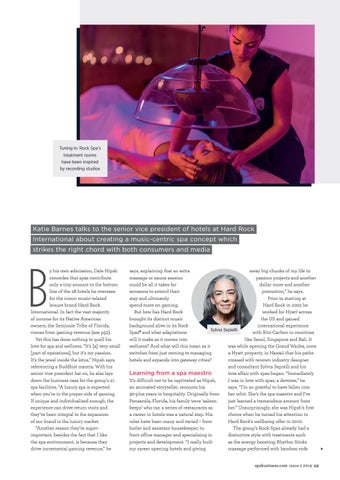 Tuning in: Rock Spa’s treatment rooms have been inspired by recording studios

y his own admission, Dale Hipsh concedes that spas contribute only a tiny amount to the bottom line of the 28 hotels he oversees for the iconic music-related leisure brand Hard Rock International. In fact the vast majority of income for its Native American owners, the Seminole Tribe of Florida, comes from gaming revenue (see p52). Yet this has done nothing to quell his love for spa and wellness. “It’s [a] very small [part of operations], but it’s my passion. It’s the jewel inside the lotus,” Hipsh says, referencing a Buddhist mantra. With his senior vice president hat on, he also lays down the business case for the group’s 21 spa facilities. “A luxury spa is expected when you’re in the proper side of gaming. If unique and individualised enough, the experience can drive return visits and they’ve been integral to the expansion of our brand in the luxury market. “Another reason they’re superimportant, besides the fact that I like the spa environment, is because they drive incremental gaming revenue,” he

away big chunks of my life to says, explaining that an extra passion projects and another massage or sauna session dollar more and another could be all it takes for promotion,” he says. someone to extend their Prior to starting at stay and ultimately Hard Rock in 2002 he spend more on gaming. worked for Hyatt across But how has Hard Rock the US and gained brought its distinct music international experience background alive in its Rock Sylvia Sepielli with Ritz-Carlton in countries Spas® and what adaptations like Seoul, Singapore and Bali. It will it make as it moves into was while opening the Grand Wailea, once wellness? And what will this mean as it a Hyatt property, in Hawaii that his paths switches from just owning to managing crossed with renown industry designer hotels and expands into gateway cities? and consultant Sylvia Sepielli and his love affair with spas began. “Immediately Learning from a spa maestro I was in love with spas, a devotee,” he It’s difficult not to be captivated as Hipsh, says. “I’m so grateful to have fallen into an animated storyteller, recounts his her orbit. She’s the spa maestro and I’ve 30-plus years in hospitality. Originally from just learned a tremendous amount from Pensacola, Florida, his family were ‘saloon her.” Unsurprisingly, she was Hipsh’s first keeps’ who ran a series of restaurants so choice when he turned his attention to a career in hotels was a natural step. His Hard Rock’s wellbeing offer in 2010. roles have been many and varied – from The group’s Rock Spas already had a butler and assistant housekeeper, to distinctive style with treatments such front office manager and specialising in as the energy boosting Rhythm Sticks projects and development. “I really built massage performed with bamboo rods my career opening hotels and giving spabusiness.com issue 2 2019 49