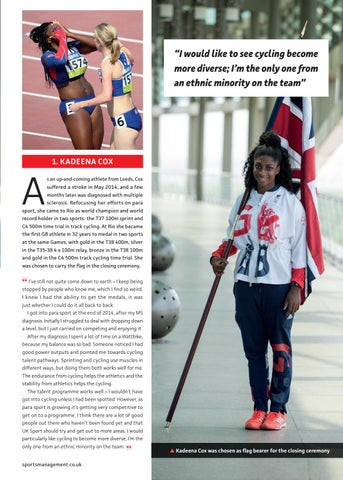 “I would like to see cycling become more diverse; I’m the only one from an ethnic minority on the team”

s an up-and-coming athlete from Leeds, Cox suffered a stroke in May 2014, and a few months later was diagnosed with multiple sclerosis. Refocusing her efforts on para

sport, she came to Rio as world champion and world record holder in two sports: the T37 100m sprint and C4 500m time trial in track cycling. At Rio she became the first GB athlete in 32 years to medal in two sports at the same Games, with gold in the T38 400m, silver in the T35-38 4 x 100m relay, bronze in the T38 100m and gold in the C4 500m track cycling time trial. She was chosen to carry the flag in the closing ceremony. I’ve still not quite come down to earth – I keep being stopped by people who know me, which I find so weird. I knew I had the ability to get the medals, it was just whether I could do it all back to back. I got into para sport at the end of 2014, after my MS diagnosis. Initially I struggled to deal with dropping down a level, but I just carried on competing and enjoying it. After my diagnosis I spent a lot of time on a Wattbike, because my balance was so bad. Someone noticed I had good power outputs and pointed me towards cycling talent pathways. Sprinting and cycling use muscles in different ways, but doing them both works well for me. The endurance from cycling helps the athletics and the stability from athletics helps the cycling. The talent programme works well – I wouldn’t have got into cycling unless I had been spotted. However, as para sport is growing it’s getting very competitive to get on to a programme. I think there are a lot of good people out there who haven’t been found yet and that UK Sport should try and get out to more areas. I would particularly like cycling to become more diverse; I’m the only one from an ethnic minority on the team. sportsmanagement.co.uk