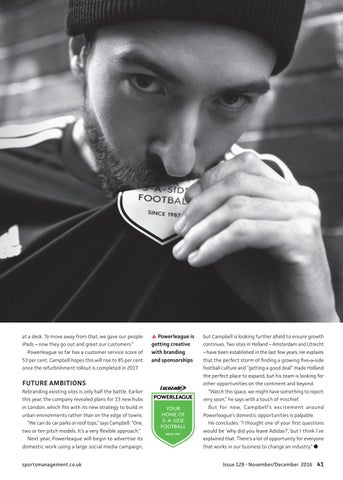 at a desk. To move away from that, we gave our people iPads – now they go out and greet our customers.” Powerleague so far has a customer service score of 53 per cent. Campbell hopes this will rise to 85 per cent once the refurbishment rollout is completed in 2017.

 Powerleague is getting creative with branding and sponsorships

but Campbell is looking further afield to ensure growth continues. Two sites in Holland – Amsterdam and Utrecht – have been established in the last few years. He explains that the perfect storm of finding a growing five-a-side football culture and “getting a good deal” made Holland the perfect place to expand, but his team is looking for

FUTURE AMBITIONS Rebranding existing sites is only half the battle. Earlier this year, the company revealed plans for 13 new hubs in London, which fits with its new strategy to build in urban environments rather than on the edge of towns. “We can do car parks or roof tops,” says Campbell. “One, two or ten pitch models. It’s a very flexible approach.” Next year, Powerleague will begin to advertise its domestic work using a large social media campaign, sportsmanagement.co.uk

other opportunities on the continent and beyond. “Watch this space, we might have something to report very soon,” he says with a touch of mischief. But for now, Campbell’s excitement around Powerleague’s domestic opportunities is palpable. He concludes: “I thought one of your first questions would be ‘why did you leave Adidas?’, but I think I’ve explained that. There’s a lot of opportunity for everyone that works in our business to change an industry.” l Issue 128  November/December 2016 41