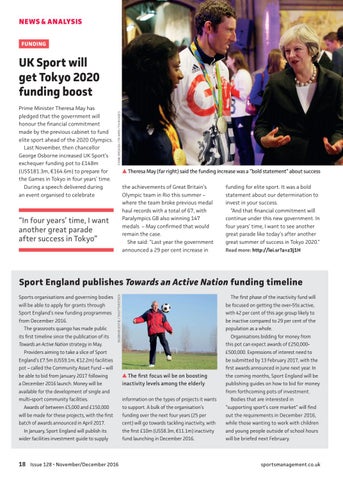 Prime Minister Theresa May has pledged that the government will honour the financial commitment made by the previous cabinet to fund elite sport ahead of the 2020 Olympics. Last November, then chancellor George Osborne increased UK Sport’s exchequer funding pot to £148m (US$181.3m, €164.6m) to prepare for the Games in Tokyo in four years’ time. During a speech delivered during an event organised to celebrate

Theresa May (far right) said the funding increase was a “bold statement” about success the achievements of Great Britain’s Olympic team in Rio this summer – where the team broke previous medal haul records with a total of 67, with Paralympics GB also winning 147 medals – May confirmed that would remain the case. She said: “Last year the government announced a 29 per cent increase in

“In four years’ time, I want another great parade after success in Tokyo”

funding for elite sport. It was a bold statement about our determination to invest in your success. “And that financial commitment will continue under this new government. In four years’ time, I want to see another great parade like today’s after another great summer of success in Tokyo 2020.” Read more: http://lei.sr?a=z3j1H

The first phase of the inactivity fund will

be focused on getting the over-55s active, with 42 per cent of this age group likely to be inactive compared to 29 per cent of the population as a whole. Organisations bidding for money from this pot can expect awards of £250,000-

Providers aiming to take a slice of Sport

first awards announced in June next year. In

be able to bid from January 2017 following a December 2016 launch. Money will be

available for the development of single and multi-sport community facilities.

the coming months, Sport England will be publishing guides on how to bid for money from forthcoming pots of investment.

information on the types of projects it wants

to support. A bulk of the organisation’s

will be made for these projects, with the first

funding over the next four years (25 per

out the requirements in December 2016,

batch of awards announced in April 2017.

cent) will go towards tackling inactivity, with

while those wanting to work with children

and young people outside of school hours

will be briefed next February.

In January, Sport England will publish its wider facilities investment guide to supply