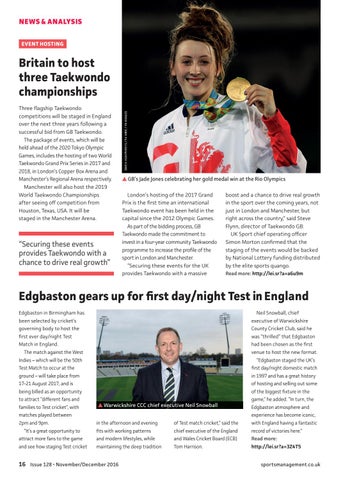 Three flagship Taekwondo competitions will be staged in England over the next three years following a successful bid from GB Taekwondo. The package of events, which will be held ahead of the 2020 Tokyo Olympic Games, includes the hosting of two World Taekwondo Grand Prix Series in 2017 and 2018, in London’s Copper Box Arena and Manchester’s Regional Arena respectively. Manchester will also host the 2019 World Taekwondo Championships after seeing off competition from Houston, Texas, USA. It will be staged in the Manchester Arena.

GB’s Jade Jones celebrating her gold medal win at the Rio Olympics London’s hosting of the 2017 Grand Prix is the first time an international Taekwondo event has been held in the capital since the 2012 Olympic Games. As part of the bidding process, GB Taekwondo made the commitment to invest in a four-year community Taekwondo programme to increase the profile of the sport in London and Manchester. “Securing these events for the UK provides Taekwondo with a massive

boost and a chance to drive real growth in the sport over the coming years, not just in London and Manchester, but right across the country,” said Steve Flynn, director of Taekwondo GB. UK Sport chief operating officer Simon Morton confirmed that the staging of the events would be backed by National Lottery funding distributed by the elite sports quango. Read more: http://lei.sr?a=a6u9m

been selected by cricket’s

governing body to host the

was “thrilled” that Edgbaston

had been chosen as the first venue to host the new format.

The match against the West Indies – which will be the 50th

Test Match to occur at the

ground – will take place from

of hosting and selling out some

being billed as an opportunity

of the biggest fixture in the

to attract “different fans and families to Test cricket”, with

game,” he added. “In turn, the Edgbaston atmosphere and experience has become iconic,

in the afternoon and evening

of Test match cricket,” said the

with England having a fantastic

chief executive of the England

attract more fans to the game

and modern lifestyles, while

and Wales Cricket Board (ECB)

and see how staging Test cricket

2pm and 9pm. “It’s a great opportunity to