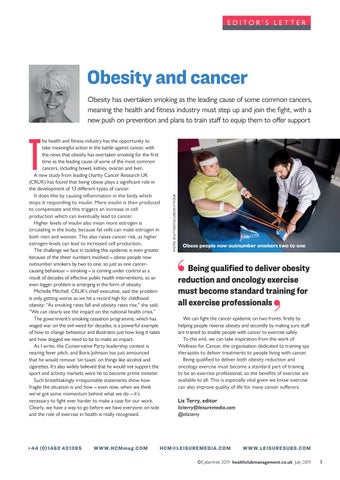 Obesity and cancer Obesity has overtaken smoking as the leading cause of some common cancers, meaning the health and fitness industry must step up and join the fight, with a new push on prevention and plans to train staﬀ to equip them to oﬀer support

he health and fitness industry has the opportunity to take meaningful action in the battle against cancer, with the news that obesity has overtaken smoking for the first time as the leading cause of some of the most common cancers, including bowel, kidney, ovarian and liver, A new study from leading charity Cancer Research UK (CRUK) has found that being obese plays a significant role in the development of 13 diﬀerent types of cancer. It does this by causing infl ammation in the body which stops it responding to insulin. More insulin is then produced to compensate and this triggers an increase in cell production which can eventually lead to cancer. Higher levels of insulin also mean more estrogen is circulating in the body, because fat cells can make estrogen in both men and women. This also raises cancer risk, as higher estrogen levels can lead to increased cell production. The challenge we face in tackling this epidemic is even greater because of the sheer numbers involved – obese people now outnumber smokers by two to one, so just as one cancercausing behaviour – smoking – is coming under control as a result of decades of eﬀective public health interventions, so an even bigger problem is emerging in the form of obesity. Michelle Mitchell, CRUK’s chief executive, said the problem is only getting worse as we hit a record high for childhood obesity: “As smoking rates fall and obesity rates rise,” she said, “We can clearly see the impact on the national health crisis.” The government’s smoking cessation programme, which has waged war on the evil weed for decades, is a powerful example of how to change behaviour and illustrates just how long it takes and how dogged we need to be to make an impact. As I write, the Conservative Party leadership contest is nearing fever pitch, and Boris Johnson has just announced that he would remove ‘sin taxes’ on things like alcohol and cigarettes. It’s also widely believed that he would not support the sport and activity markets were he to become prime minister. Such breathtakingly irresponsible statements show how fragile the situation is and how – even now, when we think we’ve got some momentum behind what we do – it’s necessary to fight ever harder to make a case for our work. Clearly, we have a way to go before we have everyone on-side and the role of exercise in health is really recognised.

Being qualified to deliver obesity reduction and oncology exercise must become standard training for all exercise professionals We can fight the cancer epidemic on two fronts: firstly by helping people reverse obesity and secondly by making sure staﬀ are trained to enable people with cancer to exercise safely. To this end, we can take inspiration from the work of Wellness for Cancer, the organisation dedicated to training spa therapists to deliver treatments to people living with cancer. Being qualified to deliver both obesity reduction and oncology exercise must become a standard part of training to be an exercise professional, so the benefi ts of exercise are available to all. This is especially vital given we know exercise can also improve quality of life for many cancer suﬀerers.