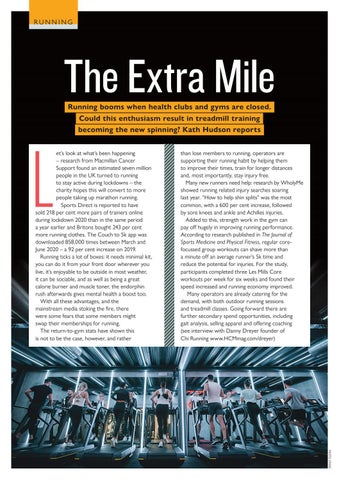 The Extra Mile Running booms when health clubs and gyms are closed. Could this enthusiasm result in treadmill training

et’s look at what’s been happening – research from Macmillan Cancer Support found an estimated seven million people in the UK turned to running to stay active during lockdowns – the charity hopes this will convert to more people taking up marathon running. Sports Direct is reported to have sold 218 per cent more pairs of trainers online during lockdown 2020 than in the same period a year earlier and Britons bought 243 per cent more running clothes. The Couch to 5k app was downloaded 858,000 times between March and June 2020 – a 92 per cent increase on 2019. Running ticks a lot of boxes: it needs minimal kit, you can do it from your front door wherever you live, it’s enjoyable to be outside in most weather, it can be sociable, and as well as being a great calorie burner and muscle toner, the endorphin rush afterwards gives mental health a boost too. With all these advantages, and the mainstream media stoking the fire, there were some fears that some members might swap their memberships for running. The return-to-gym stats have shown this is not to be the case, however, and rather

than lose members to running, operators are supporting their running habit by helping them to improve their times, train for longer distances and, most importantly, stay injury free. Many new runners need help: research by WholyMe showed running related injury searches soaring last year. “How to help shin splits” was the most common, with a 600 per cent increase, followed by sore knees and ankle and Achilles injuries. Added to this, strength work in the gym can pay off hugely in improving running performance. According to research published in The Journal of Sports Medicine and Physical Fitness, regular corefocussed group workouts can shave more than a minute off an average runner’s 5k time and reduce the potential for injuries. For the study, participants completed three Les Mills Core workouts per week for six weeks and found their speed increased and running economy improved. Many operators are already catering for the demand, with both outdoor running sessions and treadmill classes. Going forward there are further secondary spend opportunities, including gait analysis, selling apparel and offering coaching (see interview with Danny Dreyer founder of Chi Running www.HCMmag.com/dreyer)