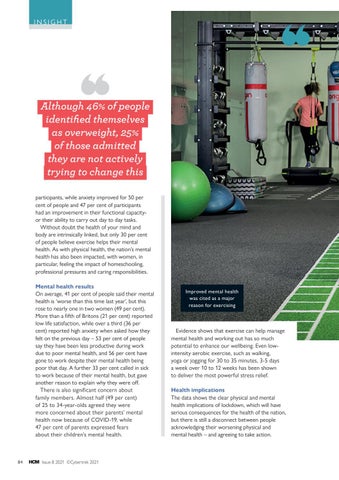 Improved mental health was cited as a major reason for exercising

Evidence shows that exercise can help manage mental health and working out has so much potential to enhance our wellbeing. Even lowintensity aerobic exercise, such as walking, yoga or jogging for 30 to 35 minutes, 3-5 days a week over 10 to 12 weeks has been shown to deliver the most powerful stress relief. Health implications The data shows the clear physical and mental health implications of lockdown, which will have serious consequences for the health of the nation, but there is still a disconnect between people acknowledging their worsening physical and mental health – and agreeing to take action.