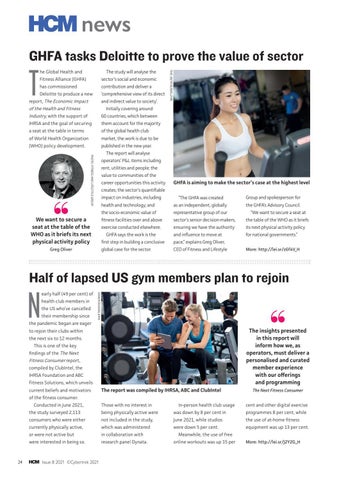 The study will analyse the

contribution and deliver a

Deloitte to produce a new

‘comprehensive view of its direct

and indirect value to society’.

of the Health and Fitness

GHFA tasks Deloitte to prove the value of sector

Industry, with the support of

IHRSA and the goal of securing

of the global health club

market, the work is due to be

published in the new year. PHOTO: FITNESS AND LIFESTYLE GROUP

The report will analyse operators’ P&amp;L items including rent, utilities and people; the value to communities of the career opportunities this activity

creates; the sector’s quantifiable impact on industries, including

Group and spokesperson for

health and technology; and

as an independent, globally

the socio-economic value of

representative group of our

fitness facilities over and above

the table of the WHO as it briefs

ensuring we have the authority

and influence to move at

GHFA says the work is the

first step in building a conclusive

global case for the sector.

CEO of Fitness and Lifestyle

“We want to secure a seat at

The insights presented in this report will inform how we, as operators, must deliver a personalised and curated member experience with our offerings and programming

to rejoin their clubs within the next six to 12 months. This is one of the key findings of the The Next

The report was compiled by IHRSA, ABC and ClubIntel

The Next Fitness Consumer

of the fitness consumer. Conducted in June 2021,

Those with no interest in

cent and other digital exercise

being physically active were

was down by 8 per cent in

programmes 8 per cent, while

consumers who were either

not included in the study,

the use of at-home fitness

were down 5 per cent.

equipment was up 13 per cent.

or were not active but

Meanwhile, the use of free online workouts was up 15 per