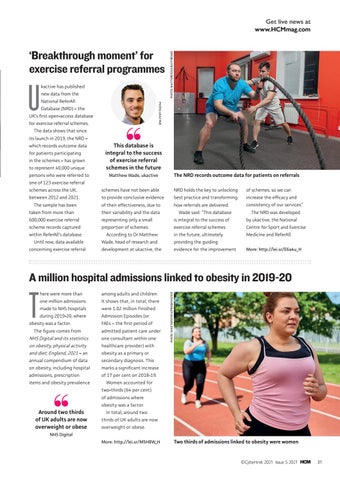 Get live news at www.HCMmag.com

UK’s first open-access database for exercise referral schemes. The data shows that since its launch in 2019, the NRD – which records outcome data for patients participating in the schemes – has grown to represent 40,000 unique persons who were referred to

one of 123 exercise referral schemes across the UK,

schemes have not been able

NRD holds the key to unlocking

of schemes, so we can

increase the efficacy and

of their effectiveness, due to

how referrals are delivered.

consistency of our services.”

The sample has been

The NRD was developed

taken from more than

their variability and the data

representing only a small

is integral to the success of

Centre for Sport and Exercise

in the future, ultimately

According to Dr Matthew

Wade, head of research and

evidence for the improvement

here were more than

among adults and children.

It shows that, in total, there

made to NHS hospitals

obesity was a factor. The figure comes from

FAEs – the first period of admitted patient care under

NHS Digital and its statistics

one consultant within one

obesity as a primary or

on obesity, including hospital

A million hospital admissions linked to obesity in 2019-20

Women accounted for two-thirds (64 per cent) of admissions where obesity was a factor.

Around two thirds of UK adults are now overweight or obese

In total, around two thirds of UK adults are now overweight or obese.

Two thirds of admissions linked to obesity were women