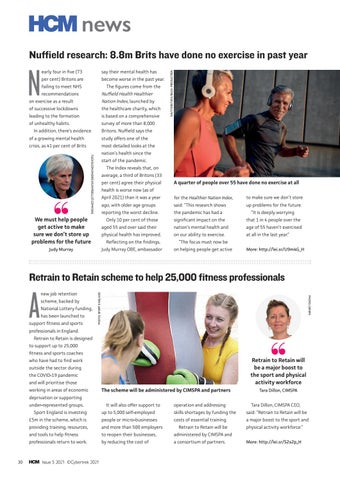 say their mental health has

per cent) Britons are

become worse in the past year.

The figures come from the

on exercise as a result

the healthcare charity, which

leading to the formation

is based on a comprehensive

Nuffield research: 8.8m Brits have done no exercise in past year

of a growing mental health

study offers one of the

crisis, as 41 per cent of Brits

most detailed looks at the FLICKR.COM/ANDREWCAMPBELL1/CCOMMONS

nation’s health since the start of the pandemic. The Index reveals that, on average, a third of Britons (33 per cent) agree their physical

health is worse now (as of

for the Healthier Nation Index,

to make sure we don’t store

ago, with older age groups

up problems for the future.

the pandemic has had a

“It is deeply worrying

significant impact on the

that 1 in 4 people over the

aged 55 and over said their

on our ability to exercise.

at all in the last year.”

Only 10 per cent of those

“The focus must now be on helping people get active

scheme, backed by National Lottery funding, has been launched to

professionals in England. Retrain to Retain is designed to support up to 25,000 fitness and sports coaches

The scheme will be administered by CIMSPA and partners

It will also offer support to

skills shortages by funding the

said: “Retrain to Retain will be

£5m in the scheme, which is

a major boost to the sport and

and more than 500 employers

and tools to help fitness

to reopen their businesses,

administered by CIMSPA and

by reducing the cost of

a consortium of partners.

Retrain to Retain will be