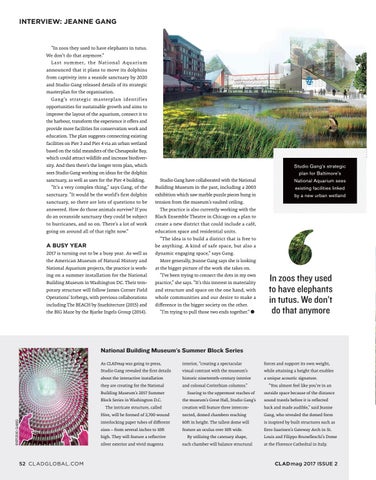 “In zoos they used to have elephants in tutus. We don’t do that anymore.” Last summer, the National Aquarium announced that it plans to move its dolphins from captivity into a seaside sanctuary by 2020 and Studio Gang released details of its strategic masterplan for the organisation. Gang’s strategic masterplan identifies opportunities for sustainable growth and aims to improve the layout of the aquarium, connect it to the harbour, transform the experience it offers and provide more facilities for conservation work and education. The plan suggests connecting existing facilities on Pier 3 and Pier 4 via an urban wetland based on the tidal meanders of the Chesapeake Bay, which could attract wildlife and increase biodiversity. And then there’s the longer term plan, which sees Studio Gang working on ideas for the dolphin sanctuary, as well as uses for the Pier 4 building. “It’s a very complex thing,” says Gang, of the sanctuary. “It would be the world’s first dolphin sanctuary, so there are lots of questions to be answered. How do those animals survive? If you do an oceanside sanctuary they could be subject to hurricanes, and so on. There’s a lot of work going on around all of that right now.”

A BUSY YEAR 2017 is turning out to be a busy year. As well as the American Museum of Natural History and National Aquarium projects, the practice is working on a summer installation for the National Building Museum in Washington DC. Their temporary structure will follow James Corner Field Operations’ Icebergs, with previous collaborations including The BEACH by Snarkitecture (2015) and the BIG Maze by the Bjarke Ingels Group (2014).

Studio Gang have collaborated with the National Building Museum in the past, including a 2003 exhibition which saw marble puzzle pieces hung in tension from the museum’s vaulted ceiling. The practice is also currently working with the Black Ensemble Theatre in Chicago on a plan to create a new district that could include a café, education space and residential units. “The idea is to build a district that is free to be anything. A kind of safe space, but also a dynamic engaging space,” says Gang. More generally, Jeanne Gang says she is looking at the bigger picture of the work she takes on. “I’ve been trying to connect the dots in my own practice,” she says. “It’s this interest in materiality and structure and space on the one hand, with whole communities and our desire to make a difference in the bigger society on the other. “I’m trying to pull those two ends together.” l

In zoos they used to have elephants in tutus. We don’t do that anymore

forces and support its own weight,

visual contrast with the museum’s

while attaining a height that enables

about the interactive installation

they are creating for the National

sound travels before it is reflected

back and made audible,” said Jeanne

Gang, who revealed the domed form

60ft in height. The tallest dome will

is inspired by built structures such as

sizes – from several inches to 10ft

feature an oculus over 10ft wide.

Soaring to the uppermost reaches of

high. They will feature a reflective

By utilising the catenary shape,

each chamber will balance structural

Louis and Filippo Brunelleschi’s Dome at the Florence Cathedral in Italy.