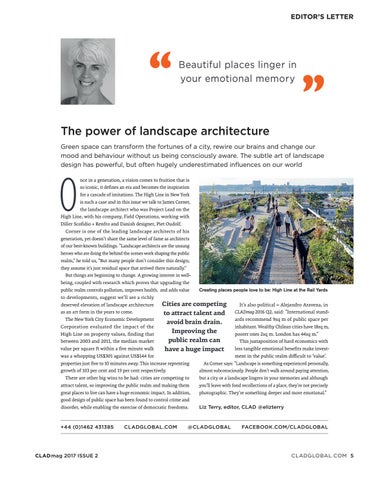 The power of landscape architecture Green space can transform the fortunes of a city, rewire our brains and change our mood and behaviour without us being consciously aware. The subtle art of landscape design has powerful, but often hugely underestimated influences on our world

nce in a generation, a vision comes to fruition that is so iconic, it defines an era and becomes the inspiration for a cascade of imitations. The High Line in New York is such a case and in this issue we talk to James Corner, the landscape architect who was Project Lead on the High Line, with his company, Field Operations, working with Diller Scofidio + Renfro and Danish designer, Piet Oudolf. Corner is one of the leading landscape architects of his generation, yet doesn’t share the same level of fame as architects of our best-known buildings. “Landscape architects are the unsung heroes who are doing the behind the scenes work shaping the public realm,” he told us, “But many people don’t consider this design; they assume it’s just residual space that arrived there naturally.” But things are beginning to change. A growing interest in wellbeing, coupled with research which proves that upgrading the public realm controls pollution, improves health, and adds value Creating places people love to be: High Line at the Rail Yards to developments, suggest we’ll see a richly Cities are competing deserved elevation of landscape architecture It’s also political – Alejandro Aravena, in as an art form in the years to come. to attract talent and CLADmag 2016 Q2, said: “International standThe New York City Economic Development ards recommend 9sq m of public space per avoid brain drain. Corporation evaluated the impact of the inhabitant. Wealthy Chilean cities have 18sq m, Improving the High Line on property values, finding that poorer ones 2sq m. London has 44sq m.” public realm can between 2003 and 2011, the median market This juxtaposition of hard economics with value per square ft within a five minute walk less tangible emotional benefits make investhave a huge impact was a whopping US$301 against US$144 for ment in the public realm difficult to ‘value’. properties just five to 10 minutes away. This increase reprenting As Corner says: “Landscape is something experienced personally, growth of 103 per cent and 19 per cent respectively. almost subconsciously. People don’t walk around paying attention, There are other big wins to be had: cities are competing to but a city or a landscape lingers in your memories and although attract talent, so improving the public realm and making them you’ll leave with fond recollections of a place, they’re not precisely great places to live can have a huge economic impact. In addition, photographic. They’re something deeper and more emotional.” good design of public space has been found to control crime and disorder, while enabling the exercise of democratic freedoms. Liz Terry, editor, CLAD @elizterry