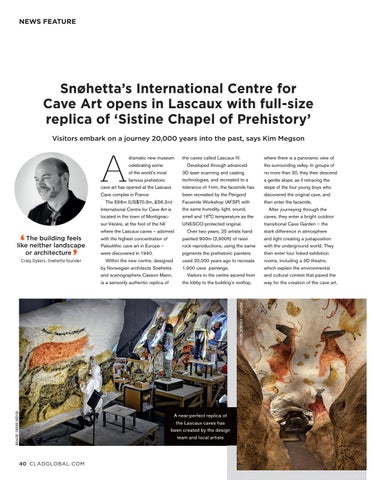 Snøhetta’s International Centre for Cave Art opens in Lascaux with full-size replica of ‘Sistine Chapel of Prehistory’ Visitors embark on a journey 20,000 years into the past, says Kim Megson

where there is a panoramic view of the surrounding valley. In groups of

of the world’s most

no more than 30, they then descend

technologies, and recreated to a

a gentle slope, as if retracing the

cave art has opened at the Lascaux

tolerance of 1mm, the facsimile has

steps of the four young boys who

been recreated by the Périgord

discovered the original cave, and

then enter the facsimile.

International Centre for Cave Art is

located in the town of Montignac-

smell and 16°C temperature as the

caves, they enter a bright outdoor

sur-Vézère, at the foot of the hill

where the Lascaux caves – adorned

After journeying through the

with the highest concentration of

and light creating a juxtaposition

with the underground world. They

rooms, including a 3D theatre,

which explain the environmental

Within the new centre, designed by Norwegian architects Snøhetta and scenographers Casson Mann,

the lobby to the building’s rooftop,

and cultural context that paved the way for the creation of the cave art,

is a sensorily authentic replica of

Visitors to the centre ascend from