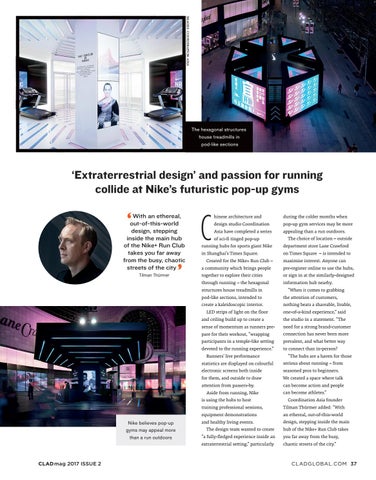 ‘Extraterrestrial design’ and passion for running collide at Nike’s futuristic pop-up gyms With an ethereal, out-of-this-world design, stepping inside the main hub of the Nike+ Run Club takes you far away from the busy, chaotic streets of the city Tilman Thürmer

during the colder months when

pop-up gym services may be more

Asia have completed a series

appealing than a run outdoors.

on Times Square – is intended to

Created for the Nike+ Run Club –

pre-register online to use the hubs,

together to explore their cities

through running – the hexagonal

information hub nearby. the attention of customers,

nothing beats a shareable, livable, the studio in a statement. “The

sense of momentum as runners pre-

need for a strong brand-customer

pare for their workout, “wrapping

connection has never been more

participants in a temple-like setting

prevalent, and what better way

devoted to the running experience.”

to connect than in-person? “The hubs are a haven for those

statistics are displayed on colourful

serious about running – from

electronic screens both inside

for them, and outside to draw

We created a space where talk

can become action and people

Aside from running, Nike is using the hubs to host

and ceiling build up to create a

than a run outdoors

“When it comes to grabbing

pod-like sections, intended to LED strips of light on the floor

maximise interest. Anyone can

a community which brings people

The choice of location – outside

design, stepping inside the main

The design team wanted to create

“a fully-fledged experience inside an

you far away from the busy,

chaotic streets of the city.”