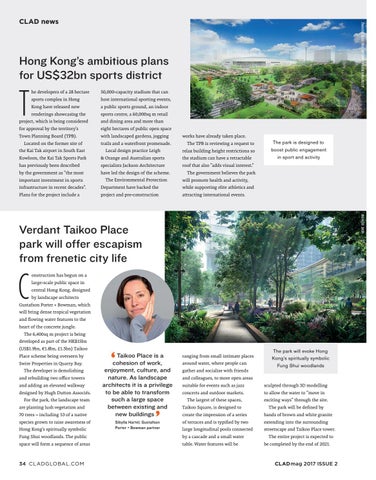 he developers of a 28 hectare

a public sports ground, an indoor

project, which is being considered

and dining area and more than

for approval by the territory’s

Located on the former site of

trails and a waterfront promenade.

works have already taken place. The TPB is reviewing a request to

the stadium can have a retractable

has previously been described

by the government as “the most

have led the design of the scheme.

The government believes the park will promote health and activity,

Department have backed the

while supporting elite athletics and

Plans for the project include a

onstruction has begun on a large-scale public space in central Hong Kong, designed by landscape architects

Gustafson Porter + Bowman, which will bring dense tropical vegetation and flowing water features to the heart of the concrete jungle. The 6,400sq m project is being developed as part of the HK$15bn (US$1.9bn, €1.8bn, £1.5bn) Taikoo Place scheme being overseen by Swire Properties in Quarry Bay. The developer is demolishing and rebuilding two office towers and adding an elevated walkway designed by Hugh Dutton Associés. For the park, the landscape team are planting lush vegetation and 70 trees – including 53 of a native species grown to raise awareness of Hong Kong’s spiritually symbolic

Taikoo Place is a cohesion of work, enjoyment, culture, and nature. As landscape architects it is a privilege to be able to transform such a large space between existing and new buildings Sibylla Hartel, Gustafson Porter + Bowman partner

ranging from small intimate places around water, where people can gather and socialise with friends

and colleagues, to more open areas suitable for events such as jazz

to allow the water to “move in

The largest of these spaces, Taikoo Square, is designed to

exciting ways” through the site. The park will be defined by

create the impression of a series

bands of brown and white granite

of terraces and is typified by two

extending into the surrounding

by a cascade and a small water

space will form a sequence of areas

table. Water features will be

The entire project is expected to be completed by the end of 2021.