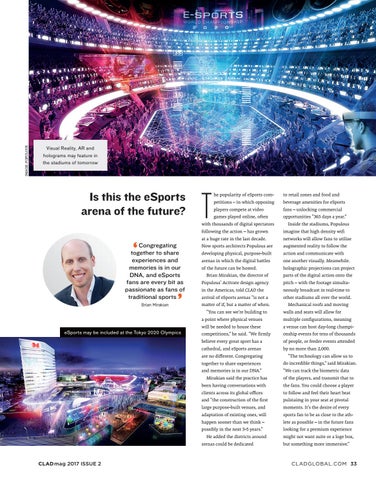 Visual Reality, AR and holograms may feature in the stadiums of tomorrow

Is this the eSports arena of the future?

he popularity of eSports com-

to retail zones and food and

petitions – in which opposing

with thousands of digital spectators

Congregating together to share experiences and memories is in our DNA, and eSports fans are every bit as passionate as fans of traditional sports Brian Mirakian

at a huge rate in the last decade.

networks will allow fans to utilise

action and communicate with

arenas in which the digital battles

one another visually. Meanwhile.

of the future can be hosted.

Brian Mirakian, the director of

pitch – with the footage simulta-

in the Americas, told CLAD the

neously broadcast in real-time to

arrival of eSports arenas ”is not a

other stadiums all over the world.

matter of if, but a matter of when.

Mechanical roofs and moving walls and seats will allow for

a point where physical venues

will be needed to house these

a venue can host day-long champi-

competitions,” he said. “We firmly

onship events for tens of thousands

believe every great sport has a

of people, or feeder events attended

are no different. Congregating

“The technology can allow us to

and memories is in our DNA.”

“We can track the biometric data

Mirakian said the practice has

of the players, and transmit that to

been having conversations with

the fans. You could choose a player

clients across its global offices

and “the construction of the first

pulstaimg in your seat at pivotal

moments. It’s the desire of every

adaptation of existing ones, will

sports fan to be as close to the ath-

happen sooner than we think –

lete as possible – in the future fans

looking for a premium experience

He added the districts around srenas could be dedicated

parts of the digital action onto the

“You can see we’re building to

eSports may be included at the Tokyo 2020 Olympics

Inside the stadiums, Populous

following the action – has grown

might not want suite or a loge box, but something more immersive.”