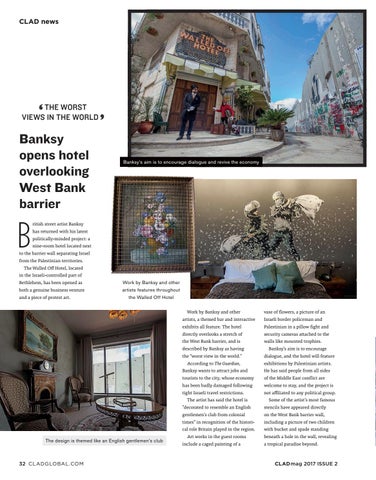 THE WORST VIEWS IN THE WORLD

Banksy’s aim is to encourage dialogue and revive the economy

ritish street artist Banksy has returned with his latest politically-minded project: a nine-room hotel located next

to the barrier wall separating Israel from the Palestinian territories. The Walled Off Hotel, located in the Israeli-controlled part of Bethlehem, has been opened as

Work by Banksy and other

both a genuine business venture

and a piece of protest art.

the Walled Off Hotel Work by Banksy and other

exhibits all feature. The hotel

Palestinian in a pillow fight and

directly overlooks a stretch of

security cameras attached to the

the West Bank barrier, and is

described by Banksy as having the &quot;worst view in the world.&quot;

Banksy’s aim is to encourage dialogue, and the hotel will feature

According to The Guardian,

Banksy wants to attract jobs and

He has said people from all sides

tourists to the city, whose economy

of the Middle East conflict are

has been badly damaged following

welcome to stay, and the project is

not affiliated to any political group.

The artist has said the hotel is

The design is themed like an English gentlemen’s club

vase of flowers, a picture of an

artists, a themed bar and interactive

Some of the artist’s most famous

“decorated to resemble an English

on the West Bank barrier wall,

times” in recognition of the histori-

including a picture of two children

with bucket and spade standing

beneath a hole in the wall, revealing a tropical paradise beyond.