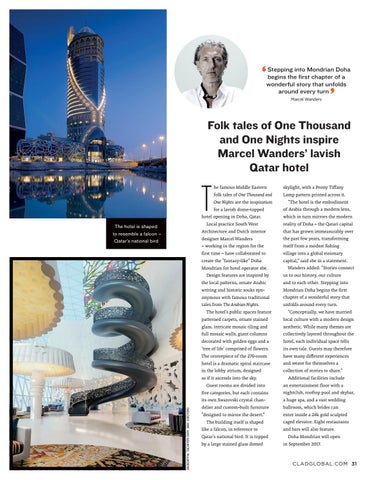 skylight, with a Peony Tiffany

folk tales of One Thousand and

Lamp pattern printed across it.

One Nights are the inspiration for a lavish dome-topped

which in turn mirrors the modern

reality of Doha – the Qatari capital

that has grown immeasurably over

the past few years, transforming

– working in the region for the

itself from a modest fishing

first time – have collaborated to

village into a global visionary

capital,” said sbe in a statement.

Mondrian for hotel operator sbe. Design features are inspired by

Wanders added: “Stories connect us to our history, our culture

and to each other. Stepping into

chapter of a wonderful story that

tales from The Arabian Nights.

unfolds around every turn.

“Conceptually, we have married

local culture with a modern design

aesthetic. While many themes are

collectively layered throughout the

decorated with golden eggs and a

‘tree of life’ comprised of flowers.

its own tale. Guests may therefore

The centrepiece of the 270-room

have many different experiences

hotel is a dramatic spiral staircase

and weave for themselves a

in the lobby atrium, designed

as if it ascends into the sky. Guest rooms are divided into

“The hotel is the embodiment of Arabia through a modern lens,

Additional facilities include an entertainment floor with a

five categories, but each contains

its own Swarovski crystal chan-

a huge spa, and a vast wedding

ballroom, which brides can

“designed to mirror the desert.”

enter inside a 24k gold sculpted

The building itself is shaped like a falcon, in reference to Qatar’s national bird. It is topped by a large stained glass domed