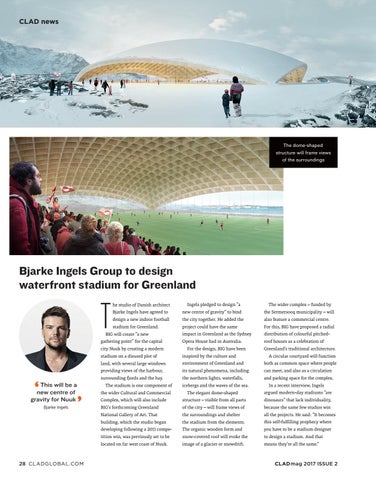 The dome-shaped structure will frame views of the surroundings

he studio of Danish architect

new centre of gravity” to bind

the Sermersooq municipality – will

the city together. He added the

project could have the same

For this, BIG have proposed a radial

impact in Greenland as the Sydney

Opera House had in Australia.

roof houses as a celebration of

gathering point” for the capital city Nuuk by creating a modern

The wider complex – funded by

Bjarke Ingels have agreed to

BIG will create “a new

This will be a new centre of gravity for Nuuk

Ingels pledged to design “a

For the design, BIG have been

stadium on a disused plot of

inspired by the culture and

environment of Greenland and

both as common space where people

providing views of the harbour,

its natural phenomena, including

can meet, and also as a circulation

surrounding fjords and the bay.

and parking space for the complex.

The stadium is one component of the wider Cultural and Commercial

icebergs and the waves of the sea. The elegant dome-shaped

In a recent interview, Ingels argued modern-day stadiums “are

Complex, which will also include

structure – visible from all parts

of the city – will frame views of

because the same few studios win

National Gallery of Art. That

the surroundings and shelter

all the projects. He said: “It becomes

building, which the studio began

the stadium from the elements.

this self-fulfilling prophecy where

The organic wooden form and

you have to be a stadium designer

tition win, was previously set to be

snow-covered roof will evoke the

to design a stadium. And that

image of a glacier or snowdrift.

means they’re all the same.”