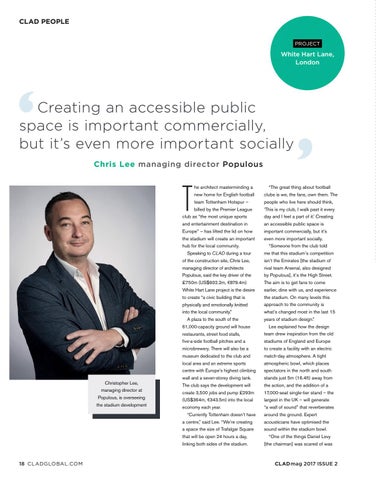 he architect masterminding a

“The great thing about football

clubs is we, the fans, own them. The

people who live here should think,

billed by the Premier League

‘This is my club, I walk past it every

club as “the most unique sports

day and I feel a part of it.’ Creating

and entertainment destination in

an accessible public space is

Europe” – has lifted the lid on how

the stadium will create an important

hub for the local community. Speaking to CLAD during a tour

isn’t the Emirates [the stadium of

Populous, said the key driver of the

by Populous], it’s the High Street.

The aim is to get fans to come

earlier, dine with us, and experience

to create “a civic building that is

the stadium. On many levels this

approach to the community is

into the local community.”

what’s changed most in the last 15

managing director at Populous, is overseeing the stadium development

years of stadium design.” Lee explained how the design

team drew inspiration from the old

five-a-side football pitches and a

stadiums of England and Europe

microbrewery. There will also be a

to create a facility with an electric

museum dedicated to the club and

local area and an extreme sports

spectators in the north and south

wall and a seven-storey diving tank.

The club says the development will

the action, and the addition of a

largest in the UK – will generate

“a wall of sound” that reverberates

around the ground. Expert

acousticians have optimised the

a space the size of Trafalgar Square

sound within the stadium bowl.

that will be open 24 hours a day, linking both sides of the stadium.

me that this stadium’s competition

of the construction site, Chris Lee,

A plaza to the south of the

“Someone from the club told