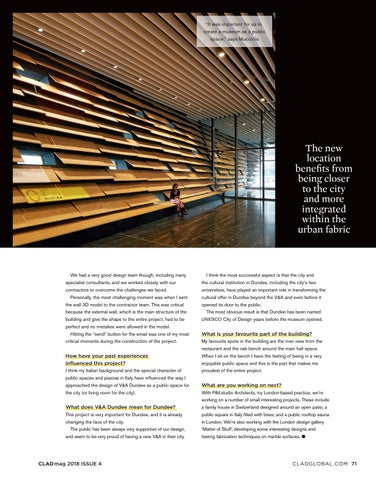 “It was important for us to create a museum as a public space,” says Mucciola

We had a very good design team though, including many

I think the most successful aspect is that the city and

specialist consultants, and we worked closely with our

the cultural institution in Dundee, including the city’s two

contractors to overcome the challenges we faced.

universities, have played an important role in transforming the

Personally, the most challenging moment was when I sent the wall 3D model to the contractor team. This was critical because the external wall, which is the main structure of the building and give the shape to the entire project, had to be

cultural offer in Dundee beyond the V&amp;A and even before it opened its door to the public. The most obvious result is that Dundee has been named UNESCO City of Design years before the museum opened.

perfect and no mistakes were allowed in the model. Hitting the “send” button for the email was one of my most critical moments during the construction of the project.

What is your favourite part of the building? My favourite spots in the building are the river view from the restaurant and the oak bench around the main hall space.

How have your past experiences influenced this project?

I think my Italian background and the special character of

proudest of the entire project.

enjoyable public space and this is the part that makes me

public spaces and piazzas in Italy have influenced the way I approached the design of V&amp;A Dundee as a public space for

What are you working on next?

the city (or living room for the city).

With PiM.studio Architects, my London-based practice, we’re working on a number of small interesting projects. These include

What does V&amp;A Dundee mean for Dundee?

a family house in Switzerland designed around an open patio; a

This project is very important for Dundee, and it is already

public square in Italy filled with trees; and a public rooftop sauna

changing the face of the city.

in London. We’re also working with the London design gallery

The public has been always very supportive of our design, and seem to be very proud of having a new V&amp;A in their city.