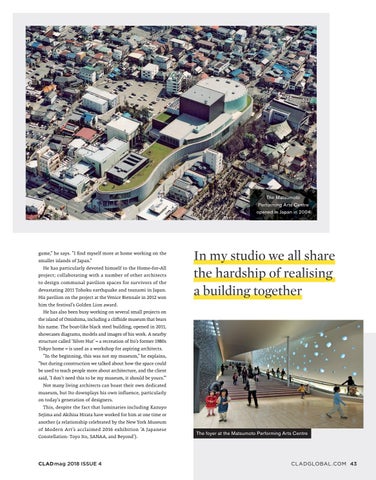 The Matsumoto Performing Arts Centre opened in Japan in 2004

game,” he says. “I find myself more at home working on the smaller islands of Japan.” He has particularly devoted himself to the Home-for-All project; collaborating with a number of other architects to design communal pavilion spaces for survivors of the devastating 2011 Tohoku earthquake and tsunami in Japan. His pavilion on the project at the Venice Biennale in 2012 won him the festival’s Golden Lion award. He has also been busy working on several small projects on the island of Omishima, including a cliffside museum that bears his name. The boat-like black steel building, opened in 2011, showcases diagrams, models and images of his work. A nearby structure called ‘Silver Hut’ – a recreation of Ito’s former 1980s Tokyo home – is used as a workshop for aspiring architects. “In the beginning, this was not my museum,” he explains, “but during construction we talked about how the space could be used to teach people more about architecture, and the client said, ‘I don’t need this to be my museum, it should be yours.’” Not many living architects can boast their own dedicated museum, but Ito downplays his own influence, particularly on today’s generation of designers. This, despite the fact that luminaries including Kazuyo Sejima and Akihisa Hirata have worked for him at one time or another (a relationship celebrated by the New York Museum of Modern Art’s acclaimed 2016 exhibition ‘A Japanese Constellation: Toyo Ito, SANAA, and Beyond’).

The foyer at the Matsumoto Performing Arts Centre