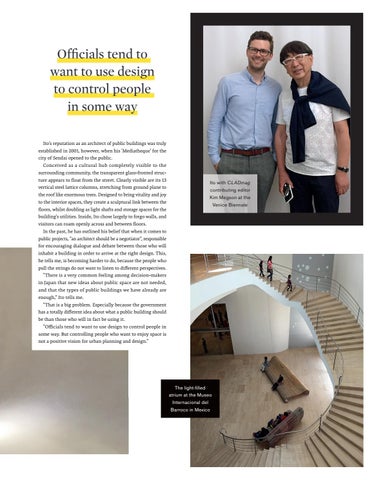 Officials tend to want to use design to control people in some way Ito’s reputation as an architect of public buildings was truly established in 2001, however, when his ‘Mediatheque’ for the city of Sendai opened to the public. Conceived as a cultural hub completely visible to the surrounding community, the transparent glass-fronted structure appears to float from the street. Clearly visible are its 13 vertical steel lattice columns, stretching from ground plane to the roof like enormous trees. Designed to bring vitality and joy to the interior spaces, they create a sculptural link between the floors, whilst doubling as light shafts and storage spaces for the building’s utilities. Inside, Ito chose largely to forgo walls, and visitors can roam openly across and between floors. In the past, he has outlined his belief that when it comes to public projects, “an architect should be a negotiator”, responsible for encouraging dialogue and debate between those who will inhabit a building in order to arrive at the right design. This, he tells me, is becoming harder to do, because the people who pull the strings do not want to listen to different perspectives. “There is a very common feeling among decision-makers in Japan that new ideas about public space are not needed, and that the types of public buildings we have already are enough,” Ito tells me. “That is a big problem. Especially because the government has a totally different idea about what a public building should be than those who will in fact be using it. “Officials tend to want to use design to control people in some way. But controlling people who want to enjoy space is not a positive vision for urban planning and design.”