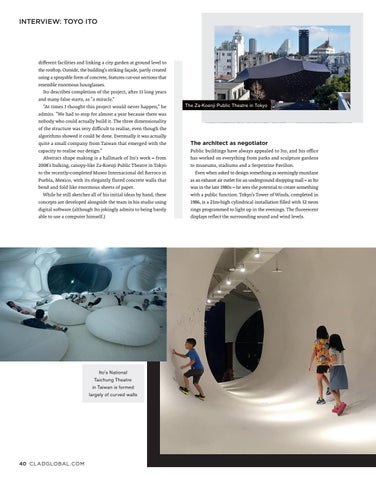 different facilities and linking a city garden at ground level to the rooftop. Outside, the building’s striking façade, partly created using a sprayable form of concrete, features cut-out sections that resemble enormous hourglasses. Ito describes completion of the project, after 11 long years and many false starts, as “a miracle.” “At times I thought this project would never happen,” he admits. “We had to stop for almost a year because there was nobody who could actually build it. The three dimensionality of the structure was very difficult to realise, even though the algorithms showed it could be done. Eventually it was actually quite a small company from Taiwan that emerged with the capacity to realise our design.” Abstract shape making is a hallmark of Ito’s work – from 2008’s hulking, canopy-like Za-Koenji Public Theatre in Tokyo to the recently-completed Museo Internacional del Barroco in Puebla, Mexico, with its elegantly fluted concrete walls that bend and fold like enormous sheets of paper. While he still sketches all of his initial ideas by hand, these concepts are developed alongside the team in his studio using digital software (although Ito jokingly admits to being barely able to use a computer himself.)

The Za-Koenji Public Theatre in Tokyo

The architect as negotiator Public buildings have always appealed to Ito, and his office has worked on everything from parks and sculpture gardens to museums, stadiums and a Serpentine Pavilion. Even when asked to design something as seemingly mundane as an exhaust air outlet for an underground shopping mall – as Ito was in the late 1980s – he sees the potential to create something with a public function. Tokyo’s Tower of Winds, completed in 1986, is a 21m-high cylindrical installation filled with 12 neon rings programmed to light up in the evenings. The fluorescent displays reflect the surrounding sound and wind levels.