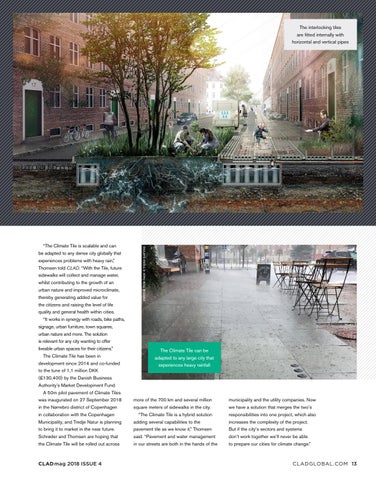 are fitted internally with

“The Climate Tile is scalable and can be adapted to any dense city globally that experiences problems with heavy rain,” Thomsen told CLAD. “With the Tile, future sidewalks will collect and manage water, whilst contributing to the growth of an urban nature and improved microclimate, thereby generating added value for

the citizens and raising the level of life quality and general health within cities. “It works in synergy with roads, bike paths, signage, urban furniture, town squares, urban nature and more. The solution is relevant for any city wanting to offer liveable urban spaces for their citizens.” The Climate Tile has been in development since 2014 and co-funded to the tune of 1,1 million DKK

(£130,400) by the Danish Business Authority’s Market Development Fund. A 50m pilot pavement of Climate Tiles was inaugurated on 27 September 2018

more of the 700 km and several million

municipality and the utility companies. Now

in the Nørrebro district of Copenhagen

square meters of sidewalks in the city.

we have a solution that merges the two’s

in collaboration with the Copenhagen

“The Climate Tile is a hybrid solution

responsibilities into one project, which also

Municipality, and Tredje Natur is planning

adding several capabilities to the

increases the complexity of the project.

to bring it to market in the near future.

pavement tile as we know it,” Thomsen

But if the city’s sectors and systems

Schrøder and Thomsen are hoping that

the Climate Tile will be rolled out across

in our streets are both in the hands of the

to prepare our cities for climate change.”