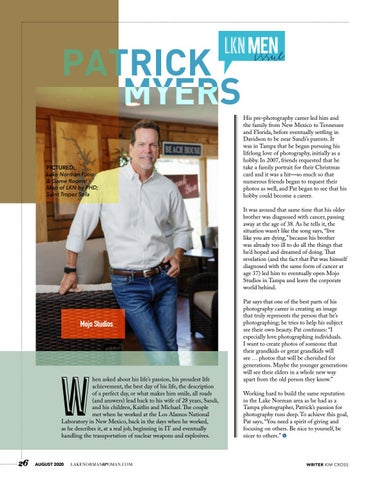 His pre-photography career led him and the family from New Mexico to Tennessee and Florida, before eventually settling in Davidson to be near Sandi’s parents. It was in Tampa that he began pursuing his lifelong love of photography, initially as a hobby. In 2007, friends requested that he take a family portrait for their Christmas card and it was a hit—so much so that numerous friends began to request their photos as well, and Pat began to see that his hobby could become a career.

It was around that same time that his older brother was diagnosed with cancer, passing away at the age of 38. As he tells it, the situation wasn’t like the song says, “live like you are dying,” because his brother was already too ill to do all the things that he’d hoped and dreamed of doing. That revelation (and the fact that Pat was himself diagnosed with the same form of cancer at age 37) led him to eventually open Mojo Studios in Tampa and leave the corporate world behind.

hen asked about his life’s passion, his proudest life achievement, the best day of his life, the description of a perfect day, or what makes him smile, all roads (and answers) lead back to his wife of 28 years, Sandi, and his children, Kaitlin and Michael. The couple met when he worked at the Los Alamos National Laboratory in New Mexico, back in the days when he worked, as he describes it, at a real job, beginning in IT and eventually handling the transportation of nuclear weapons and explosives.

Pat says that one of the best parts of his photography career is creating an image that truly represents the person that he’s photographing; he tries to help his subject see their own beauty. Pat continues: “I especially love photographing individuals. I want to create photos of someone that their grandkids or great grandkids will see … photos that will be cherished for generations. Maybe the younger generations will see their elders in a whole new way apart from the old person they know.” Working hard to build the same reputation in the Lake Norman area as he had as a Tampa photographer, Patrick’s passion for photography runs deep. To achieve this goal, Pat says, “You need a spirit of giving and focusing on others. Be nice to yourself, be nicer to others.” w