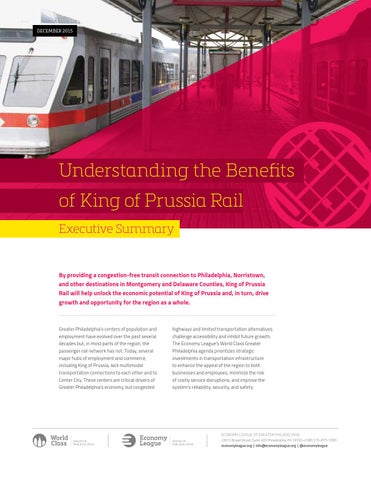 By providing a congestion-free transit connection to Philadelphia, Norristown, and other destinations in Montgomery and Delaware Counties, King of Prussia Rail will help unlock the economic potential of King of Prussia and, in turn, drive growth and opportunity for the region as a whole.

Greater Philadelphia’s centers of population and employment have evolved over the past several decades but, in most parts of the region, the passenger rail network has not. Today, several major hubs of employment and commerce, including King of Prussia, lack multimodal transportation connections to each other and to Center City. These centers are critical drivers of Greater Philadelphia’s economy, but congested

highways and limited transportation alternatives challenge accessibility and inhibit future growth. The Economy League’s World Class Greater Philadelphia agenda prioritizes strategic investments in transportation infrastructure to enhance the appeal of the region to both businesses and employees, minimize the risk of costly service disruptions, and improve the system’s reliability, security, and safety.

a dense live-work-play center with multi-family housing and complimentary service retail. But while King of Prussia’s many existing assets and strong investment pipeline point to a bright future for the area, vehicular congestion and limited transportation choices present obstacles to sustained growth. Area leaders will have to come together around shared strategies to address these challenges and accommodate future growth.

2 Understanding the Benefits of King of Prussia Rail

By providing a “one-seat ride” to King of Prussia from the 69th Street Transportation Center in Upper Darby and the Norristown Transportation Center, the project promises to create a critical transit link between King of Prussia and Philadelphia as well as Norristown and other destinations in Montgomery and Delaware Counties. SEPTA is currently undertaking a public process to identify the exact route and location of stations. While approximately $20 million in

federal funding is available for project planning and a portion of design, additional funding will be necessary to meet the estimated project cost of $1.0 billion–$1.2 billion. SEPTA intends to apply for funds through the Federal Transit Administration’s discretionary New Starts program, which awards competitive grants for major transit investments. Learn more at kingofprussiarail.com.

With the addition of King of Prussia Rail service, NHSL ridership is expected to increase between 66% and 81% over current levels. 66%–81%

Travel time savings for drivers and transit users in the region

Increased development and property values due to additional connectivity

New residents attracted by the convenience of location

The content of this report draws from the December 2015 “Understanding the Economic Impacts of SEPTA’s Proposed King of Prussia Rail Project” economic impact study, available online at economyleague.org and kingofprussiarail.com. The economic impact study was produced by the Economy League of Greater Philadelphia and Econsult Solutions, Inc. on behalf of SEPTA. In addition to complete findings, the study also includes an explanation of methodology.

4 Understanding the Benefits of King of Prussia Rail

Construction Spending The construction phase of the King of Prussia Rail Project is expected to support local spending as materials are acquired and temporary construction jobs are created to build the new railway.

Project construction is anticipated to generate between $1.1 and $1.3 billion in economic activity within the five-county southeastern Pennsylvania region.

Capital investment in King of Prussia Rail is expected to generate $20 million–$22 million in tax revenues in Pennsylvania.

Travel Time Savings King of Prussia Rail service would considerably shorten the duration of the average transit trip to King of Prussia from locations across the region.

TO KING OF PRUSSIA MALL

TO KING OF PRUSSIA BUSINESS PARK

Reduced Congestion Drivers switching to transit as a result of the King of Prussia Rail Project would lead to an annual reduction of up to 18 million vehicle miles traveled.

The addition of King of Prussia Rail service is expected to reduce travel time for existing transit riders by an estimated 104,000–217,000 hours

to King of Prussia will save drivers travel time as well. Time savings for drivers are estimated at 1.7 million–2.1 million hours per year, valued at $36.4–$44.5 million.*

* Time savings are calculated using US Department of Transportation guidelines and are based on a percentage of median hourly salary for the region. Business travel is valued at a higher rate than personal travel.

6 Understanding the Benefits of King of Prussia Rail

New Residents The convenience and development that direct rail service would spur in King of Prussia is expected to bring an additional 330–470 new residents to the community every year. Twenty years after the rail line opens, 6,700–9,400 people are projected to have moved to King of Prussia as a result of King of Prussia Rail. This increase represents growth of 33%–47% over King of Prussia’s residential population today.

Moderate development projections anticipate that the King of Prussia Rail Project will lead to an increase of 17,000–29,000 jobs and 6,700–9,400 new residents in King of Prussia over 20 years.

The content of this report draws from the December 2015 “Understanding the Economic Impacts of SEPTA’s Proposed King of Prussia Rail Project” economic impact study, available online at economyleague.org and kingofprussiarail.com. The economic impact study was produced by the Economy League of Greater Philadelphia and Econsult Solutions, Inc. on behalf of SEPTA. In addition to complete findings, the study also includes an explanation of methodology.

The Economy League would like to thank the Delaware Valley Regional Planning Commission; Econsult Solutions, Inc.; and SEPTA for their contributions to the study that serves as the basis for this summary.

The Economy League is a civic catalyst that brings together leaders and organizations to address the most challenging issues facing Greater Philadelphia. Built on our foundation of independent, highquality analysis and practical insight, we spark new ideas, develop strategies, and galvanize action to enhance the region’s global competitiveness. Learn more at economyleague.org 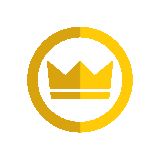 Understanding the benefits of the King of Prussia Rail

Understanding the benefits of the King of Prussia Rail