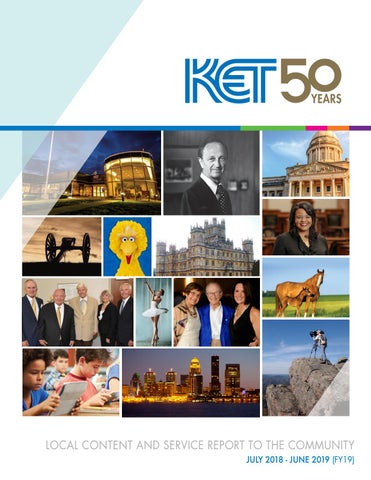 OUR MISSION KET’s mission is to make Kentucky a better place and strengthen its communities by educating, inspiring, informing and connecting its citizens through the power of public media.

OUR VISION KET distinguishes itself as the most-trusted, preeminent source of highquality educational and public media — in classrooms, homes and communities — to meet the diverse needs of Kentucky. KET produces and provides innovative and relevant programs and services, giving all citizens access to in-depth information and to cultural and educational opportunities.

OUR VALUES LEARNING lifelong pursuit of knowledge EQUITY equal access to needed resources FAIRNESS respect for all voices CREATIVITY encouragement of imagination, invention and expression INNOVATION appropriate use of advanced techniques and technologies EXCELLENCE achievement of high quality and effectiveness INTEGRITY adherence to the highest standards of conduct DIVERSITY inclusion in our workforce, services and content COMMUNITY working together toward common goals 2

With a variety of resources, including family workshops,

community partners in Louisville and Eastern Kentucky to

helps prepare the state’s children to be kindergarten ready.

bring the Ready To Learn project to young children ages

Corporation for Public Broadcasting, the Ready To Learn project offered fun workshops and camps for families and educators in science, early literacy and math.

During the 2018-19 school year, KET participated in

more children from low-income homes than any other

the Kentucky Early Childhood Institute with more than

2-8 in underserved communities. Funded in part by the

THE YEAR AT A GLANCE

Provided 125 courses and training events to 2,887 childcare workers and

KET resources are used in Kentucky classrooms every

day. Through the thousands of free online resources

KET provides at KET.org/education and in PBS

“KET has a cadre of staff and consultants who go out

achievement through innovative and engaging use of

and work with teachers, making them aware of the

technology. In addition, KET participated in the national

how to maximize that content in their instruction,” said

of 10,390 parents and children engaged in the nine-day

commissioner at the Kentucky Department of Education. KET’s Education consultants reached more than 12,200 educators and students in K-12 schools through 380 workshops and events. KET welcomed thousands of students and teachers to workshops at its Media Lab. In addition, KET Education 6

“From its work with early childhood education to its teacher development and resources for K-12, KET has been the bedrock of education in the Commonwealth,” said Derrick Ramsey, Kentucky’s secretary of education and workforce development (2015-2019).

THE YEAR AT A GLANCE Instructional Resources & Services

events and consultations to more than 12,000

Professional Development Almost 19,000 PD certificates were awarded to educators and other school personnel during FY19.

During the 2018-2019 season, NEWS QUIZ was consistently a top-10 resource nationally on PBS LearningMedia REPORT TO THE COMMUNITY

In FY19, workforce initiatives continued to be a major

resources to address some of Kentucky’s most urgent needs for workforce training and education.

In partnership with the Kentucky Department of

After receiving a grant from the Corporation for Public

by creating curricula materials that tie job skills with

& IT, construction, healthcare and transportation &

logistics. The videos focus on the specifics of these

industries, including education and experience required,

additional courses are in production.

In addition, KET trained nearly 600 adult educators on using instructional technology in the classroom and

In Demand resources are intended for young adults,

veterans and adults in career transition. This, along with

other workforce solutions, serves as the centerpiece

of KET’s marketing and outreach effort as a continued

part of CPB’s American Graduate – Getting To Work

launched at the Luther Luckett Correctional Center in

initiative. Through its American Graduate work, KET is

THE YEAR AT A GLANCE

participated in training workshops conducted by KET, and more than

IN THE COMMUNITY. FOR THE COMMUNITY. KET FORUMS Disrupting the Opioid Epidemic: A KET Forum, which won a 2019 Ohio Valley Chapter Regional Emmy Award, brought together leading experts to discuss advances in treating addiction. On Pathways for Tomorrow’s Workforce: A KET Forum, education and workforce leaders discussed programs for preparing Kentucky students for success. School Safety: A KET Forum brought together lawmakers, educators and students to discuss new school safety legislation. And on Early Learning: A KET Forum, lawmakers, educators and advocates discussed what it means to prepare a young child to succeed.

THE KET STORY This program explores KET’s beginnings and 50 years of service as Kentucky’s only statewide educational broadcasting network. In the 1950s and ‘60s, KET founder O. Leonard Press saw the potential of television – a new technology – to provide equitable access to high-quality instruction in schools throughout Kentucky. The production explores KET’s history and its commitment to education and Kentucky-focused programming throughout its five decades of public service.

BUILDING HOPE: THE DON AND MIRA BALL STORY Don and Mira Ball have had a profound impact on Central Kentucky. Through their business Ball Homes, they’ve established residential neighborhoods in Lexington and beyond, and their success allowed them to pursue philanthropic interests centered on helping people in the community. This program offers a look back at the incredible life that Mira and Don, who passed away in March 2018, shared and how their devotion to charitable giving and community service has made a positive difference in Kentucky.

HEALTH In addition to continued work around the Inside Opioid Addiction Initiative, KET covered a variety of topics on the weekly Kentucky Health. KET also launched a Youth Mental Health Initiative, anchored by the six-part series You Are Not Alone, a town hall-style conversation with experts and professionals to discuss Kentucky’s increase in youth suicide rates. The series was funded in part by a grant from the Foundation for a Healthy Kentucky and Project AWARE.

PUBLIC AFFAIRS Kentuckians count on KET’s public affairs programming to gain a greater understanding of the issues facing our state and the nation. Kentucky Tonight, Comment on Kentucky and Connections with Renee Shaw delivered weekly insight and analysis, while live legislative coverage and nightly recaps provided unparalleled access to the legislative process. This year, KET also produced the two-part Kentucky Tax Law Changes: What You Need To Know, a live call-in to help Kentuckians navigate recent changes passed by the Kentucky legislature.

COMMUNITY EVENTS During FY19, KET traveled to communities across the state with program screenings, events for kids and families, and more. At the second-annual Daniel Tiger’s Neighborhood Be My Neighbor Day events, kids learned the importance of being a caring neighbor. In Lexington, families assembled emergency kits, made dog toys for rescue animals, created greeting cards for the elderly in the neighborhood and more. In Louisville, more than 3,300 registered for the day’s activities. The events were supported by PNC in partnership with the Fred Rogers Company. KET also hosted it’s ninth-annual Super Saturday family event in Lexington, where nearly 1,400 people enjoyed educational activities, hands-on learning and performances by PBS’ Mr. Steve. In addition, at the Kentucky State Fair, families enjoyed “KET Day” and got to meet some of their favorite PBS KIDS characters. Families also got to meet The Cat in the Hat at local library events throughout the year. Fans of Doc Martin enjoyed sneak previews in Lexington and Louisville of the long-awaited eighth season. Viewers also came out in Lexington, Bowling Green and Louisville for screenings of the KET production Robert Penn Warren: A Vision. Warren’s daughter, poet and professor Rosanna Warren, was a special guest at the screening at Western Kentucky University, which houses the Center for Robert Penn Warren Studies. In September, KET hosted a day-long celebration of its 50th anniversary. The event, which took place at the Lexington Network Center, brought together current and retired employees, special guests, supporters, friends, and KET founder Len Press and his wife, Lillian, for a reception, tours, and more. Events of the day included remarks from PBS President Paula Kerger and Mr. Press and the unveiling of a Kentucky Historical Highway Marker on the front lawn.

Governor’s 2019 State of the Commonwealth and Budget Address, live coverage

PBS brought us new seasons of Masterpiece, including

in Louisville at the Churchill Downs racetrack. This

the exploits of Ross Poldark. Victoria returned for a

marked the third time the fan-favorite series filmed in

Europe. Season 3 of The Durrells in Corfu premiered,

of tickets to be part of the show. And Louisville, it turned

as did season 6 of Endeavour, and viewers were also

out, delivered two of the season’s most valuable items.

treated to Les Miserables, an epic six-part mini-series based on the Victor Hugo novel.

Another much-anticipated premiere was season 8 of Doc Martin, which took fans on a ride through the odd

The Great American Read, a national initiative from

and funny lives of those in the quaint seaside village of

PBS that kicked off in early 2018, concluded in the

Portwenn. Also, nostalgia reigned supreme with a one-

fall with Americans voting Harper Lee’s To Kill A

Mockingbird to be “America’s best-loved book.”

documentary Won’t You Be My Neighbor?, which took viewers beyond the puppets and zip-up cardigans to

discover what drove Rogers to inspire generations of

children with his message of kindness, honesty and

Samuelsson traveling to American cities to explore their

KET is Kentucky’s source for PBS programs. Science, history, the arts and more come to life through the engaging and thought-provoking content from PBS.

PBS is the 6th mostwatched network among all broadcast & cable channels.

For the 15th consecutive year, the American public ranked PBS #1 IN PUBLIC

TRUST and an excellent value for tax dollars.

Nurturing the Whole Child Kentucky families depend on KET to

deliver PBS KIDS – the number one educational media brand for children – through television, digital platforms and community-based programs. This year, PBS KIDS premiered Let’s Go Luna, an animated series featuring three children – Leo, Carmen and Andy – who learn about differences and similarities in their global community with the

language, music and daily life of the local region through fun adventures. Parents ranked PBS KIDS as the most

help of their friend, Luna the Moon. The children

prepares children for success in school.

move around the world with their parents and,

at each stop, Luna helps them experience the

KET anywhere. Thatâ&#x20AC;&#x2122;s our vision, to provide KET and PBS programs on demand, any time, on practically any device: - KET.org

-PBS video app, with PBS and KET programs, for iPhone, iPad and Android

- PBS channels, with PBS and KET programs, for Roku,

- PBS KIDS apps for iPhone, iPad and Android - KET on iTunes U

3.75 million. More than 3.6 million videos were viewed on KET.org and related video platforms. More than 1.2

were streamed on PBS LearningMedia in FY19.

occurred across the KET Legislative Coverage app and KET.org.

Frankfort and a studio and community outreach

originate from the O. Leonard Press

operates a production center at the Capitol in office on Main Street in Louisville.

The governing body for KET is the Kentucky Authority for Educational Television, an agency of the Commonwealth of Kentucky in the Education & Workforce Development Cabinet. The KET Foundation and the Commonwealth Fund for KET support the mission and work of the Authority by

managing and soliciting funds and contributions that support local productions, services, and the acquisition of PBS and other programs. The Friends of KET, a statewide group of volunteers, help promote

programs and services in communities across the 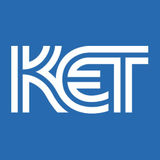