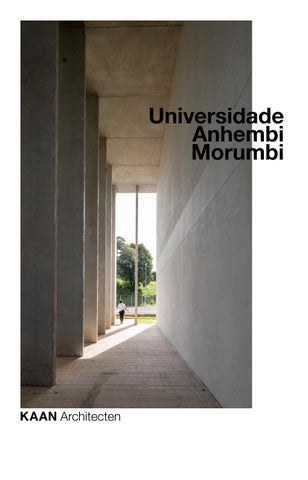 Photography Fran Parente Printing Drukkerij Tripiti, Rotterdam, The Netherlands Paper Cyclus Print 150grs ISBN 978-90-824843-4-2 This work is subject to copyright. All rights are reserved. No parts of this publication may be reproduced or transmitted in any form or by any means. For any kind of use, a prior permission of the publisher and copyright owner must be obtained.

The UAM, Universidade Anhembi Morumbi, is housed in two buildings designed by KAAN Architecten, in the inland of São Paulo State, one in São José dos Campos, the other in Piracicaba. The sibling buildings, both completed at the beginning of 2018, have been driven by the same design choices: to create an elegant yet strong architectural identity for the University campuses through a non-scale approach to the representative façades, providing the students and the institution with a generous central common space that promotes social interaction.

The adaptability of the design concept ensured that each building perfectly suited the particularities of the climate and surroundings of its different places of implantation, without losing the aesthetic unity that marks this new phase in the expansion of the Universidade Anhembi Morumbi. Located in proximity to a main road junction, the Faculty of Medicine in SĂŁo JosĂŠ dos Campos stands like a modernday Acropolis on an elevated plot - ideally situated to become a new reference point in the dense urban fabric. Meanwhile, the new building in Piracicaba occupies a plot

along a secondary urban expansion axis in the southern part of the city. By optimizing the topographical characteristics of their areas and thanks to the balanced faรงade geometries, both projects are perceived as city landmarks that firmly and visually open themselves to the city, giving the University a recognizable position within the architectural panorama. The implantation sought to intervene minimally in the natural landscape, which resulted in a smooth terrain landscaping with total use of the local land: no land was brought or removed from the lot.

The buildings have different volumetric proportions - SĂŁo JosĂŠ dos Campos shows a more compact structure and consists of three floors, while Piracicaba, spreading horizontally, lays on the slope of the surrounding landscape directly dialoguing with it. The study of the climate characteristics and a search for passive non-expensive sustainability solutions shaped the design for both the central space and the facades. The central common spaces have natural light and ventilation, optimized by a

ceiling cross pergola made of concrete and smaller wooden elements. This solution allows the shading necessary for a comfortable space, while being able to soften the natural weather. The central translucent cover consists of a system formed by a pergola of wood under polycarbonate sheets. The polycarbonate used is the alveolar, which has internal air mattresses that delay the entrance of the heat of the solar radiation. Their plates are suspended by a metallic structure, which leaves them slightly displaced of the slabs of the surroundings and the pergola of wood, guaranteeing the

circulation of natural air. In every façade, the need for shade is fulfilled by a fully encompassing system of vertical slabs that mitigates the intense Brazilian solar radiation. Choosing a regular structural system enabled KAAN Architecten to feature glass between the thin concrete slabs and the roof beams, either molded insitu, by relying on the expertise of the local workforce (São José dos Campos) or prefabricated to enhance sharpness and exactitude in the prefab system (Piracicaba).

Careful studies were made for attachment system and sharp edges detail in the prefab building to keep the aesthetic language that we seek: very thin and sharp lamellas give a non-scale feeling to the faรงade. The windows of the faรงades did not need special acoustic treatment since there is no interference from urban noise. The inner walls and ceilings are specified to meet acoustic comfort requirements for study rooms and laboratories. The faรงades together with the translucent central axis cover form an extremely

efficient indirect natural lighting system that substantially reduces the need for artificial lighting, eliminating the need for curtains or blinds, and preventing reflection. All of the lamps used in the building are LEDs, with a color illumination between white and yellow, the most visually comfortable for users. The diffusers prevent unidirectional light output, increasing visual comfort. Specified according to the function of each environment: milky acrylic diffusers achieve a cozier feel while the mirror reflective ones provide more intense illumination. All these elements contribute to the

energetic sustainability and thermal control of the buildings in the specific conditions of the Brazilian climate. Aiming at presenting an equal ratio of common and study spaces, the shared program features classrooms, diverse laboratories for practice exercises, a vivarium, a space for the cafeteria, physiotherapy facilities, a medical library and offices. All educational spaces have been placed alongside the longitudinal glazed faĂ§ades to take advantage of natural light and have been oriented towards the large-scale central void, to embody the buildingsâ&#x20AC;&#x2122; core social identity

and its essence as a space for encounters human connection and knowledge exchange. Making use of traditional Brazilian materials and technologies, the Universidade Anhembi Morumbi has been architecturally enhanced by the two new Faculties of Medicine designed by KAAN Architecten. 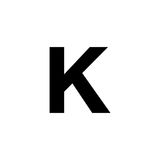